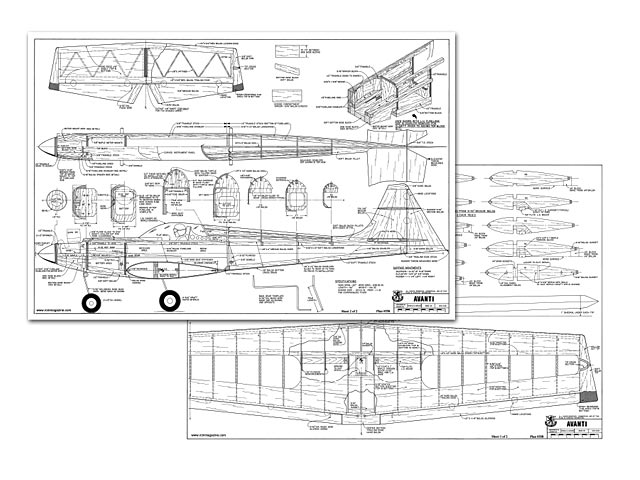 Quote: "The Avanti is a .60 powered full pattern ship for the advanced Sunday Flyer. By Donald A Grassi.

A delightfully lively bird that goes through its maneuvers in a manner that can best be described as graceful. It can be flown slowly without falling out of the sky and, conversely, will climb vertically until practically out of sight.

Avanti translated means 'ahead of,' or 'in front of.' I'm not quite sure just what this creation is ahead of or in front of. but the name seemed to have a nice ring to it, so Avanti it is. The design presented here is the result of a four year labor of love that started with a compulsive desire for a good looking 'groovy' model that I could call my own, capable of doing the full pattern, with good low speed landing characteristics.

The Avanti, which is the fourth in a series, has, in fact, turned out to be all these things and it is with great satisfaction that I dedicate this article to the 'Sunday Flier.' At the outset, many of the then current designs were studied both on paper and at the flying field, The Kwik Fli (oz6526) was chosen as the point of departure, consequently the first version in the series was a modification of the Kwik Fli, but as the design evolved the similarities all but disappeared.

The original versions had rectangular wing planforms which, ultimately, evolved into the current tapered wing. While the rectangular planform was more forgiving in the round maneuvers, such as loops and Figure Eights, the tapered wing reacts better in the rolling maneuvers. Besides, the tapered wing just plain looks better. The earlier versions had a symmetrical airfoil of 18% constant chord to thickness ratio. The present design uses a symmetrical progressive airfoil, 17% thickness at the wing root and 18.5% at the tips, which enhances the wing tip stalling characteristics. No, that doesn't mean the tips stall better it means they stall last? The wing is set up with 1/16 in positive incidence, the engine with 1-1/2 degree downthrust. This setup, coupled with the progressive airfoil, makes possible truly low speed approaches with a minimum of attention required on the elevator, and landings that flare out beautifully.

Construction. Before getting into the details of construction, several comments are in order. All four versions of this design were covered with silk and dope and weighed in at 6-1/4 to 6-1/2 lbs when new. As each of the previous versions grew older and heavier with successive repair jobs (due mostly to running out of air and the inevitable sudden stops) each became less responsive and generally more difficult to handle on low speed approaches.

The most recent version weighs 100 oz (61/4 lbs) which seems to be ideal, so keep it light. If you plan to cover with one of the heat shrink materials you can build a little heavier, but if you plan to silk and dope, select your balsa carefully. Use soft balsa blocks and planks and medium/soft on all sheets. The use of hard balsa should be restricted to the wing spars and leading and trailing edges, to the fuse keel and stringers, and a few other selected places, as noted on the plans.

Regarding the non-controversial science of gluing, I'd like to say that while I'm not a member of the cult that goes around demonstrating with placards stating 'Help Stamp Out Epoxy,' I do believe that its indiscriminate use produces a model that is unnecessarily heavy and with the advent of the five minute stuff its use has gotten somewhat out of control. It does, however, have its undisputed place such as in and around the motor compartment, installing the firewall bulkhead, the motor mounts, the landing gear mounts, and other high stress locations. On all other balsa to hard-wood, or balsa to plywood joints I use white glue. On all balsa to balsa joints I use Ambroid (double glued) with the only exception being gluing up the fuse doublers to the fuse sides where contact cement works quicker..." 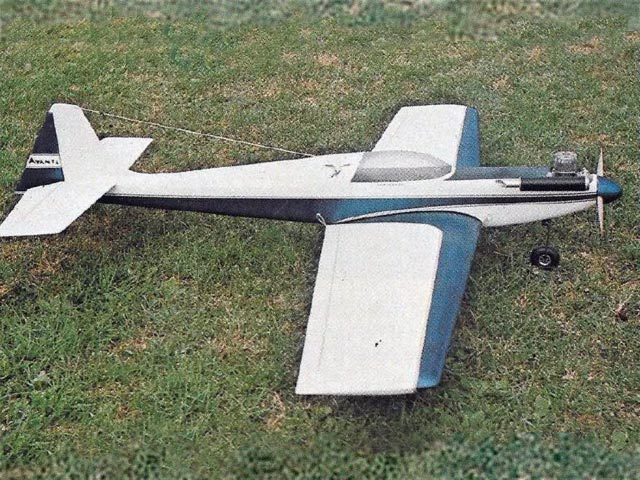