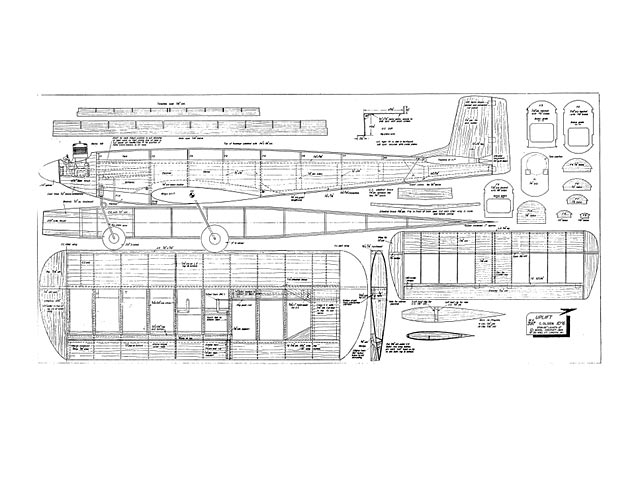 Quote: "The name Uplift applies to a series of low-wing models with similar areas and moments, rather than to one fixed design. This series started life back in 1959, when there was a lot of controversy about the advantages of low and shoulder wings. The initial experiment was simply to put a standard 18 per cent Uproar wing on the bottom of the 'box,' instead of the top, the idea being that the only way accurately to evaluate the low wing configuration, was to make an identical model to Uproar in respect to areas, moments, weight, etc with the wing on the bottom.

The resultant model was unsatisfactory only in that the undercarriage was too far back, so that it had a tendency to nose over on landing. Apart from this, there was little to choose between either layout. However, since the Uproar (oz2220) was a more familiar model and somewhat simpler to build (no wheels in the wing) it was decided to drop the Uplift idea for the time being. The belief that low wing models rolled better was proved to be unfounded and I have had no reason to change this opinion since.

The next low wing model was built in 1961 as a result of about one year's cogitation on the Zurich World Championships, with the Voltswagon particularly in mind. Incidentally, it has since been agreed that it was Bob Durham's piloting ability, rather than the model, which caused the impressive result. Anyway, a model not dissimilar to the Voltswagon was built, with a 10 per cent, symmetrical wing with 2:1 taper ratio. This and another similar model, were reasonably satisfactory, but showed that their sharply tapered wings had nasty characteristics, particularly near the stall.

By this time, Uproar had been considerably improved and was superior to the low wing models flown at that time. It was not until 1962 that, after a lot of deep thought and some brain washing, it was decided to make a low wing model for the Kenley World Championship. That version was virtually identical to the one presented here, except for an inverted engine; the message had finally penetrated that judges seemed to prefer pretty models! This model was quite satisfactory but, unfortunately, had an argument with a bash at over 100 mph, an efficient method of reducing an airframe to scrap without damaging radio or motor, so back to the - inevitable by this time - Uproar.

Development. The same version was further developed in 1963, via a series of prangs, in an attempt to arrive at Genk with a low wing model. However, providence again interfered and, after writing off three models in the three weeks before I departed, guess what model I arrived in Belgium with? It was only after a protracted effort last winter, when three identical Uplifts were built in order to get out of a rut, that I eventually managed to fly in a contest with a low wing model.

The result of this six year saga is that over this period of time about ten low wing models were built and flown. From this quite a lot of information on the subject was gained; this has resulted in the model presented here.

The main advantages of a low wing model, in the present type of competition, appear to be: improved inverted flight for obvious reasons; better stall turns due to the rudder only being effective in the yaw plane; less wandering in outside manoeuvres (which is difficult to correct) and the neutral stability which makes it tend to stay in any attitude in which it is put.

Against these advantages, low wing models are difficult to spin and require more concentration when flying.

Design Detail. Parallel chord wings are used for their simplicity and ease of duplication. Although tapered wings look nicer, at the moment they appear to have no particular advantage for multi stunt flying and have a wing jig for making 66in x 12in x 15 percent wings. Conventional ailerons are used as I do not particularly like the action of strip ailerons, nor am T convinced that they are a Lot easier to build than the type used here.

The wing section used started life as NACA 0015, but this presented difficulties in spinning due to excess stability, so a bit was carved off the template to make a sharper entry at the leading edge. This seems to have had the desired effect of making consistent spins possible, without making far to much instability in the pitch plane; the only problem being that the glide was vastly improved, which can be embarrassing in calm weather. With this type of aerofoil section it is possible to do steep turns at low airspeeds, stretch a glide, and take off in a stalled condition without having a pile of wreckage on your hands, The upright engine mounting is used for simplicity in starting, adjustment and cowling.

All the models since 1961 have used a Merco 49 and 61. The 49 is entirely adequate for most purposes, unless the all up weight is over 6-1/2 lb. All the models to date have weighed less than 6-1/4 lb. The Merco 61 makes for a 'bomb' and vertical climbs of several hundred feet are possible. This is quite nice but, with the extra speed, us old men have trouble with our reactions. It is possible in a 6 lb. model with a 49 to do 1-1/2 vertical rolls and four or five consecutive vertical 8's from the bottom up.

The latest model has dispensed with rubber bands in favour of Cam-Locks, which have the advantage of always ensuring that the wing is in the same place and only about five seconds to put on - a boon to the flyer impatient to pick up the wreckage! The radio compartment should have ample room for all but the more old-fashioned relay receivers. To date the model has only been flown with reeds but, contrary to some opinions, I can see no reason why any fairly well designed model should not tly equally well with either reeds or proportional equipment.

Construction. This should present few problems for anyone with experience of model building. However, it is not a suitable subject for a newcomer to radio models..." 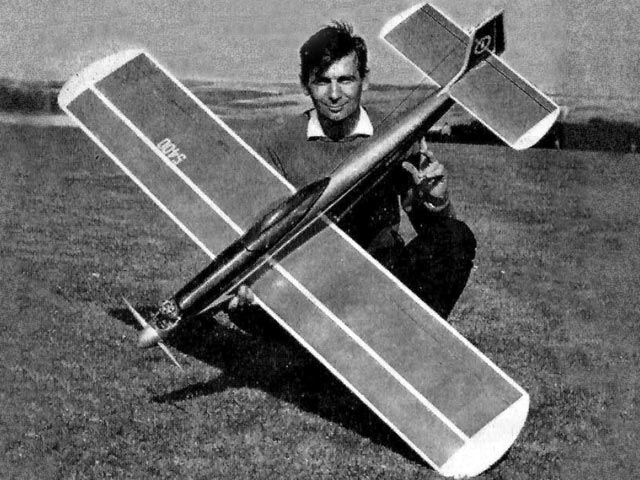 Hi Steve, I was reading the February, 1965 issue of RCM Magazine. In the Plans Service advertisement was an "Uplift" with the same designer, span, and power as listed here. So, I suspect this plan was sold in the USA through RCM Plans/Hobby House Service. There, the plan had the serial number 145. I will be searching for the plan here, in the USA; but, I thought to make a note here, for historical purposes.
DavidTerrell - 03/10/2016
I saw a demo of Chris Olson's Uplift back in 1964 (?) when he displayed the aircraft at a Dunsfold family day. (Dunsfold was the aerodrome that Hawkers Kingston plant used to develop their aircraft, namely Hunter, Sea Hawk in the 50's P1127 Kestrel, Harrier and Hawk 60's 70's. My father worked there and took me along. I was very impressed with Olson's Uplift, which could do absolutely anything. But there were also demonstrations from the "Last of the Many" Hurricane, their Hind, and a Sea Fury and their HP Dragon Rapide. I can not remember if we had a demo from the P1127 but I had seen that when my father took me in one day. Quite a day!
In the days when companies spent money on heritage products.
Dave Bush - 28/03/2021
Add a comment