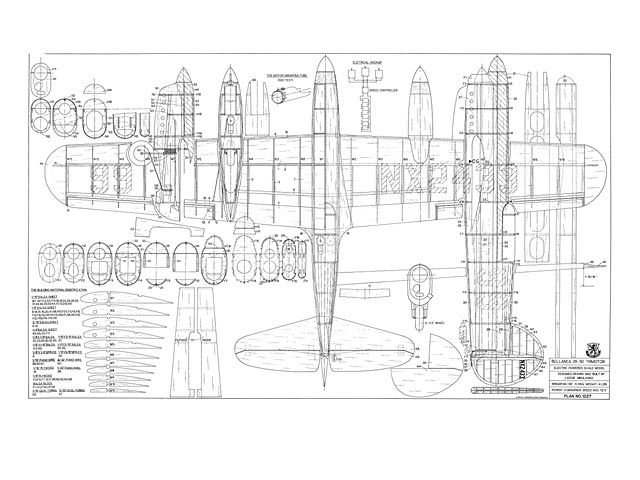 Quote: "A Unique Sport Scale Electric For Three Speed 400 Motors. The Bellanca Trimotor came into existance in the 1930's, which was arguably the most exciting era of American aviation. Aero racing was the rage of the day. Not only aviation enthusiasts, but the general public was thrilled by the almost daily news of the latest speed and distance records being set. Many individuals and several companies got involved in this Golden Age of racing, including the Bellanca company. Bellanca built several long distance racing planes, but most of these were single engine racers until a Romanian Count, Captain Alexander Papana, commissioned the construction of the 28-92 Trimotor that is the subject of this article.

The plane was built to fly from America to Romania in record time. The Bellanca company designed and built one or maybe two of these very attractive, streamlined speedsters that achieved a top speed of about 250 mph using its clean aerodynamic design, and the fact that the pilot had almost 1000 horsepower on tap. A 250 hp Menasco engine occupied a nacelle in each wing panel, and a 420 hp Ranger was nestled in the nose. The plane had a wingspan of 46ft 4in.

On the route to Cleveland, one of the Menasco engines threw the connecting rod, requiring an emergency landing short of Cleveland. It was soon repaired and entered in the 1939 Bendix Trophy Race. Flown by Art Bussy, it finished in second place with a speed of 244.486 mph, over one hour behind the winner, Frank Fuller, in his Seversky. This aircraft was then sold to a South American interest.

About 10 years ago, I came across the 3-view drawings for this plane drawn by R.S. Hirsch, and was anxious to begin construction drawings for a model using three .40 size glow engines. Since I wanted to participate in scale competition, I required pictures of the full-size aircraft. A colleague suggested that I contact the well-known modeler, Claude McCullough, and explain what I was searching for. As I have learned over the years, most modelers do not hesitate to help out, and that was the case this time as well, and Mr. McCullough graciously sent me a dozen black and white photos showing the full-size plane from several different angles.

On one of my pilgrimages to the Toledo R/C Show, I noted with interest the Robbe company's display of their newly released four engine DeHavilland Dash 7 commuter plane, powered by four Graupner Speed 400 motors. Inspired by the prospect of creating inexpensive multiple engine aircraft, I purchased four Speed 400 motors from Hobby Lobby International at the show. On my journey home, I decided that it was time to take the Bellanca Trimotor project off the back burner and get cooking.

The Bellanca 28-92 design is an excellent candidate of the Speed 400 motors in the direct drive configuration, since it has low drag and generous wing area. Plans were created from the 3-view drawings, and the model was constructed in short order. The outline of the model is accurate as per the 3-view.

On the day of the test flight, several friends accompanied me to the flying site. The model was taxied into the wind, and power was applied. Acceleration was brisk and the model lifted quickly. Then the fun started. The model was all over the sky. It was extremely pitch sensitive, and I was happy to land it with only minor damage to one of the nacelles.

After I repaired the nacelle, I moved the CG forward and tried again. This time the model was rock steady, and I was very pleased with its flight characteristics. The model is quite fast, yet the landing speed is relatively low. In the air, the Bellanca looks great, especially when simulating air racing maneuvers. The model is capable of aerobatics, but that was certainly not its intended purpose.

General Building Comments: To achieve success with this model, you must make every attempt to keep the weight down. Do not be tempted to beef up any area. Use the lightest balsa possible, and be sure to use the lightweight wheels as well. Cut out everything accurately according to the drawing. All the parts are numbered to make identification easier.

Build directly over the plan which should be protected with clear plastic. It is important to follow the building sequence in the order presented; this will make the alignment of subassemblies of the model much easier to achieve..." 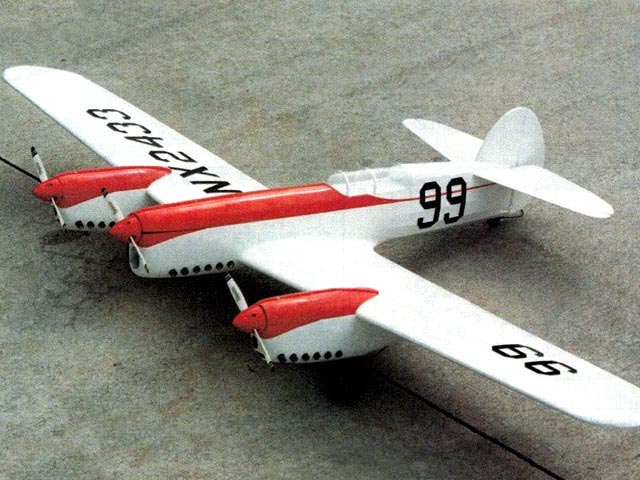 Saw this in RCM years ago but wasn't into electric yet. Just downloaded it for next winter's project. Can't wait!
ErnestP - 04/02/2018
A most interesting subject and a good article at that. IIRC, this aircraft was heavily influenced by the sensational DH.88 Comet, which set the standard for long distance racers of the period.
clouddozer - 05/02/2018
Add a comment