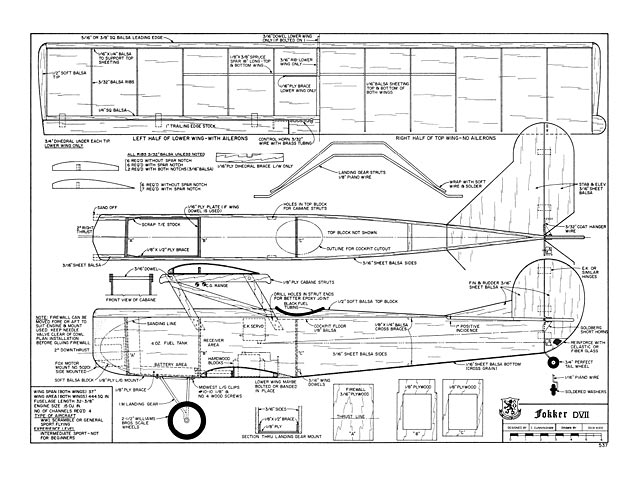 The .15 powered Fokker D7 has been expressly designed for the WWI Scramble event presented in the July 1973 issue of R/C Modeler Magazine. It has been designed to look like a D7 and yet is not a scale replica. The original was flown first with a Super Tigre .15 and then later with an O.S. Max 5 with the conclusion that both engines give excellent performance. Obviously, the Super Tigre has more power output but the aircraft flies just as well on the Max .15.

One of the most enjoyable features of the Fokker D7, as far as I am concerned, is that it is one of the best flying, peppiest, all-around most enjoyable little airplanes that I have ever designed or have ever flown. In fact, it literally did fly right off the drawing board. The first flight was made on a weekday evening with no one at the field. When the engine was cranked up, I reached over the top to adjust the needle valve and the first flight, as well as all subsequent flights from that point on, were really a dream. The airplane has been flown in still air and in winds up to 25 mph, the latter leaving white caps gusting on Lake Benbrook adjacent to our flying site here in Fort Worth, Texas. I feel confident that if you build the Fokker D7 for either a WW I Scramble event, or simply for sheer sport flying, you'll have one of the sweetest, nicest flying airplanes that you'll ever have the opportunity to own.

As a small aircraft there is very little material that goes into building the model and very little time consumed in constructing it. In fact, the original was built in three evenings and covered in one additional after dinner session. Everything has been designed in this aircraft to use stock sizes of wood, there is almost no waste, and the entire aircraft, when finished, should weigh between 2-3/4 and 3 pounds. My original was covered in red MonoKote while Don's prototype in California used yellow and red Solarfilm with black and while trim MonoKote.

When I designed the model I assumed that it would be able to fly with just rudder and elevator without using ailerons so, during the first flight I did not have ailerons on the lower wing. At slow speeds however, the rudder was very effective but as the speed increased, the rudder became less and less effective. In fact, it became almost impossible to make the aircraft turn when it was flat out in a racing mode so I took it back and cut 1 in wide strip ailerons on the bottom wing and have flown it this way ever since. This is the way it is shown on the plans presented with this article. You will also note that the wings are fully sheeted and have just a short spar on the center to provide a little extra insurance. My original prototype does not utilize this spar, however, after seeing what this aircraft is capable of doing, and how quickly it can be put into a snapsoll and then into a full speed spin, It seemed a little bit wiser to go ahead and add a small spruce spar across the center section of both wings! The Fokker D7 will fly upright, upside down, inside out and do anything you ask of it. It will go through any AMA maneuver which a little .15 size engine is capable of performing. I suggest that for maximum power output you use a Taipan 8/4 glass filled nylon prop available from Hobby Shack.

The original set up was for a Super Tigre .15 and, when the Max .15 was incorporated in the nose of the aircraft, I used a long extended .15 Tatone mount plus a 1/4 in plywood block behind the motor mount between it and the firewall in order to put the .15 out into the breeze. By using all of the extra long mount it allowed the needle valve to stick out past the nose of the aircraft, however, this is not objectionable, and makes it much easier rather than putting in an extension down inside the nose-cowling.

If your interest has been whetted by this description of the Fokker D7, get out your pile of balsa wood, your trusty razor blade, your tube of epoxy glue and let's get to work..." 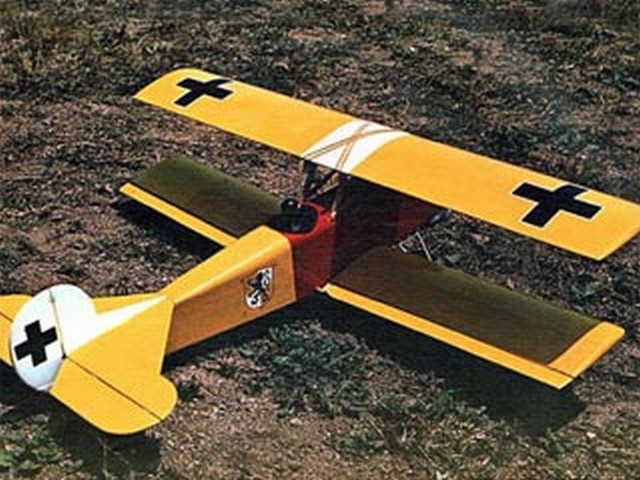