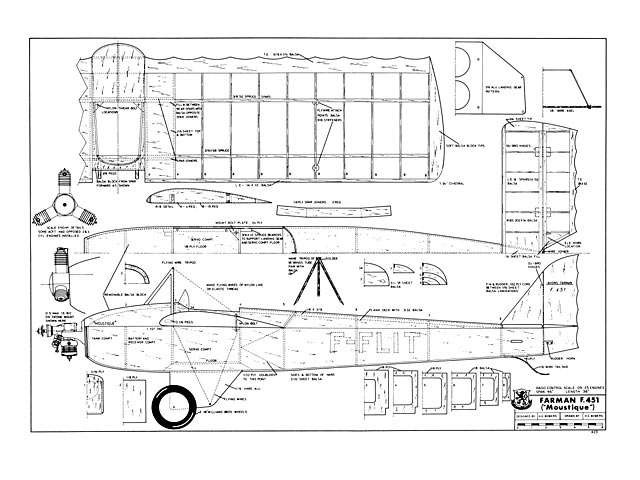 Quote: "For 15 engines and anything from Galloping Ghost to full-house proportional, this scale French Farman looks as if it had been lifted right out of the Musee de l'Air at Chalais-Meudon.

My affair with the Farman Mosquito began on a cold spring day in the lovely little Paris suburb of Chalais-Meudon. My old friend, Maurice Bayet, the director of France's leading model publication, had called my office that morning and asked me to join him and another guest, Ron Moulton of England, for a visit to the Musee de l'Air. What a wonderful opportunity. To take part in a privately conducted tour of one of the world's greatest collections of aviation history, accompanied by two such leading authorities, is something that happens once in a lifetime. Needless to say, I accepted with pleasure and, since I lived in the suburb of Garches during my three years assignment in Paris, Chalaias-Meudon became one of my favorite haunts during the remainder of my stay in France.

The collection of aircraft at Musee de l'Air is overwhelming, but I found myself particularly attracted to a little cream, shoulder wing exhibit that looked to be more of a model than an airplane. It was wire braced, had massive landing gear struts, and was powered by a little twin cylinder 30 hp AVA engine that reminded me of the old Aeronen mill. The lines and configuration were amazingly simple and I vowed to myself that this would be the ultimate choice for a radio control scale model. On each subsequent visit to the Musee de l'Air this opinion became more confirmed, but construction would have to wait until I returned to the US.

A couple of years later while I was commanding a Military Airlift Command squadron at Charleston Air Force Base, South Carolina, I began to thumb through my drawings and pictures of the Moustique and the old itch started again, so during the very limited spare time that I could muster I began to draw and build a rudder-only job powered by an old Arden .099 which in itself was an antique. The model flew beautifully and since that time I have built another in which I used proportional radio gear for rudder, elevator and throttle. In all, I know of seven other Moustiques which have been built from my sketches, and flown in every configuration from galloping-ghost to full-house proportional. With the exception of a jammed galloper during initial test flight on one of the models, all have been extremely successful. It is a refreshing change to see a model that looks and flies like a real airplane, and there is something about those flying wires and that landing gear that makes the Moustique intriguing.

I have seen this model powered with everything from the old Arden .099 that I mentioned to a Super Tiger .23, but I would not recommend the latter. After all, the original airplane only flew at about 60 mph. The optimum engine for this bird is the 0.5. MAX .15 R/C, as shown on the plans.

Flying this airplane, like building it, is simple and fun and it will do just about everything in the book... " 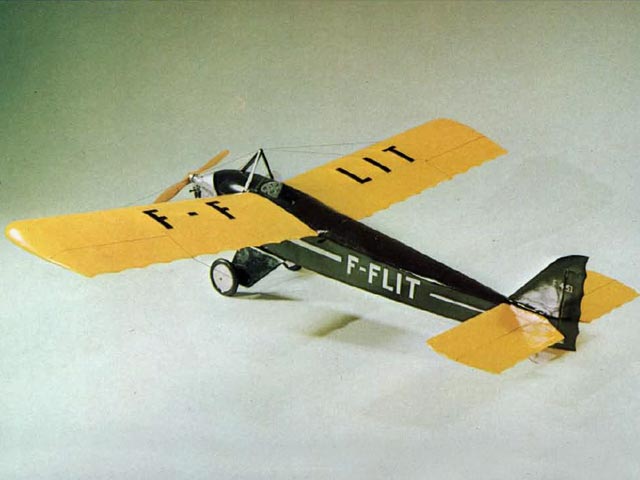 Three photos of my Farman Moustique built in 1972 from Hurst Bowers' plans in RCM [pics 005-007]. It had three channel Heathkit R/C and an O.S. Max .15. The balsa dummy cylinder (with actual glow plug!) was quite convincing and I recall fooling many fellow aeromodellers that the motor was a twin - until they had a closer look. It was a fine flyer, but was eventually wrecked due to radio failure, a common occurrence in those days - especially with budget minded teenagers using "homemade" equipment. The happy young fellow in the third photo is my younger brother David - now a grandfather of two!
ChrisMoes - 18/11/2020
Add a comment