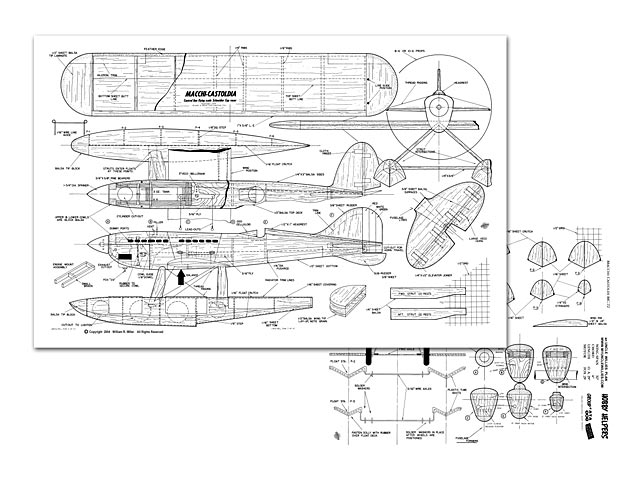 Still well-remembered, the Schneider Cup Races brought forth many excellent designs, innovations in construction and use of new materials. The Macchi-Castoldia is one good example. It was built after many years of careful planning by the Italian Air Force.

On June 2 1933, an Italian pilot, Warrant Officer Francesco Angelo flew the MC-72 seaplane four times over 3 km course on Lake Garda, averaging a breathtaking 440 mph. An official mark of 440.7 mph in 1934 was not exceeded for 6 years and then by a land plane. This Italian machine still holds the speed record for seaplanes using reciprocating engines.

Angelos' was one of several Macchi-Castoldia low-wing monoplanes in the Italian Air Force's high-speed flight program conducted at Lake Garda over several years. Two Fiat V-12 engines were set in tandem; the rear engine drove a shaft between the V banks of the forward engine. Each operated independently; the props revolved in opposite directions which eliminated torque problems. The engines turned up 3,200 rpm to deliver a then fantastic total of 3,000 hp.

Rumors were that a number of engines burned out before the cooling systems were debugged. Literally, the machine was a flying radiator.

Our model representation is close to scale except for the contra-rotating prop. We devised a 'non-scale' land cradle to permit terraferma flights, but the plane is basically a water flyer. Our test model housed a Foster 29 inverted. The beefy structure is such that a .35 could be employed with no fear of over-powering.

Construction is basically simple, with a little more time required than usual because of the two floats. Since floats are a novel item, let us proceed with these (start from the water up!). Check the bill of material and procure the items needed.

Both pontoons (as they are so called) use 1/16 x 3 in medium grade balsa throughout except for the balsa nose tip blocks. A crutch system sim-plifies assembly. Shape profile; with a pencil mark off bulkhead stations on both sides. Cut to shape bulkhead halves - note grain direction. Cement these to the crutch on proper station lines; be liberal with cement since the floats take the landing loads. When bulkheads dry in place fasten the 1/16 sheet balsa bottom. Trim extended edges by following top-view of float pattern.

The only touchy part on the float will be the curved deck. Soak the sheet stock in very warm water, then while dripping wet wrap in place over the fore and aft float deck. Hold with rubber bands until dry..." 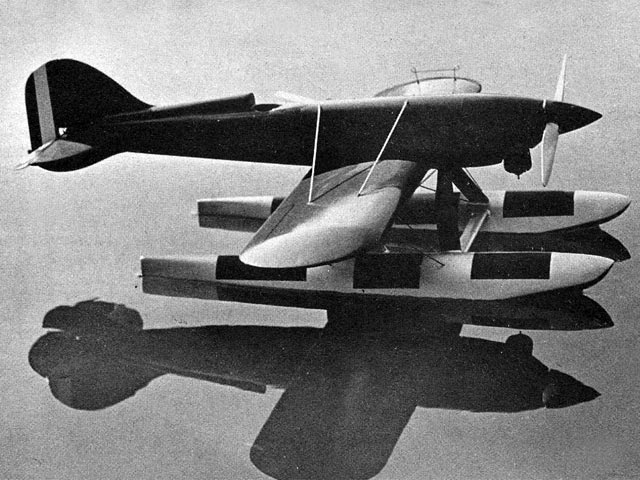