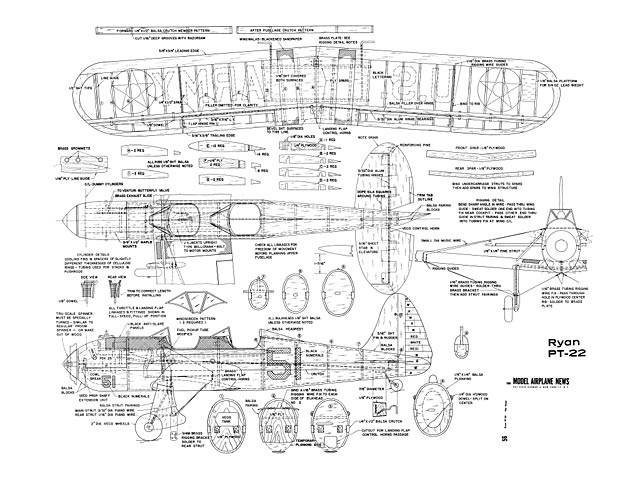 Quote: "Famed trainer makes delightful control liner for .23 to .25 engines. Reliable throttle and flaps enable you to fly it just like real ship. 'Drag' it in, land, pour on the coal, climb on out. Living!

The fuel and batteries were tossed in the tool box, the tool box was in turn tossed in the Chevvy and I started home from the last scheduled contest of the 1957 season. My scale model had done well that season, but her original lustre was fading. Without new equipment, 1958 would be a slaughter.

Looking ahead to the 1958 season, it was felt that in control-line flying scale competition the extra flight points would be the key points, the difference between victory or defeat. Accordingly, it was planned that the Ryan PT-22, chosen as my 1958 contest model, would have a throttle-control arrangement and working landing flaps. Successfully demonstrating the throttle and flaps, and taxiing a lap, promised a possible 30 points, a maximum point potential with a minimum of complicated linkages and fittings. In the past, the complicated and often unreliable electrically or spring-loaded third line methods of controlling these operations had discouraged this writer from trying these things. But the simplicity and complete reliability of the J. Roberts flight control equipment as witnessed at the carrier event circles had me reaching for my triangles and T-square.

The Fox .25-powered Ryan has been built to a scale of 1-1/4 inches equals 1 foot, having a 36-3/8 inch wingspan and a weight of 31 ounces. The ship balances at about 3/4 inch aft of bulkhead No.2 without the use of ballast and flies smoothly so trimmed. There were, however, some difficulties experienced at first during the low-speed taxi attempts. First was that of the engine quitting if one attempted to taxi during the latter part of a flight. Eventually, a theory was brought forth, that if the gas tank were less than half full during a slow rolling taxi. attempt, the absence of centrifugal force allowed the fuel to settle in the tank and the pick up tube would no longer pick it up. Solution was to relocate the pick up tube (see drawings) deeper in the tank. (No inverted flying under this setup, please.) This solved that problem, but now on prolonged taxiing the engine seemed to bog down and quit. For this one, the near scale diameter 9 x 6 Power Prop was trimmed to an eight inch diameter. We could now taxi anytime and for as long as required. In addition, it was noted that when the model is flying at idle speed or making a landing approach, the ship is actually on the verge of a stall. You've had it if you run out of fuel and your engine poops out at this time. It's good business to schedule your operations according to your known tank run.

A typical contest flight goes something like this. From an unassisted standing start, the model is taxied a quarter lap and stopped. With a roar she takes the air in a long, smooth climb and flies five laps. The ship then flies one lap at half speed and then completes the remainder of the ten qualifying laps at normal speed. The ten laps in, she settles in a long glide and touches down gently. The model taxis a full lap and stops within inches of the desired goal. With a roar she climbs again, flies a lap, touches down, climbs again, flies another lap and touches down again, Sound like fun? Its great fun for the flier and spectators alike.

CONSTRUCTION: The wings have both sweepback and dihedral and it can be a bit tricky to assemble the panels accurately. Try this simple jig. Take two 8 x 20 inch boards and block up the ends until the correct dihedral angle is achieved, Tack the plans on the jig and the wings can then be built as a one piece unit with correct sweepback and dihedral angles assured. Block up the 5/8 x 3/4 in leading edges with 3/32 shims and pin them and the 1/4 x 1/2 spars over the plans. Block up ribs A, B, C, and D with 1 /16 inch shims and then cement all the ribs and tip parts into place..." 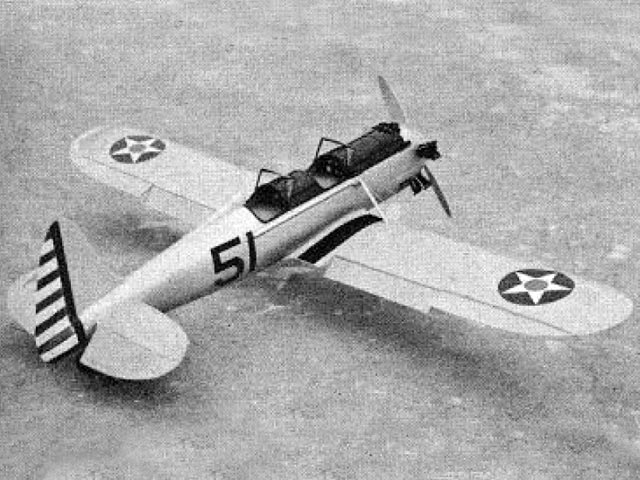