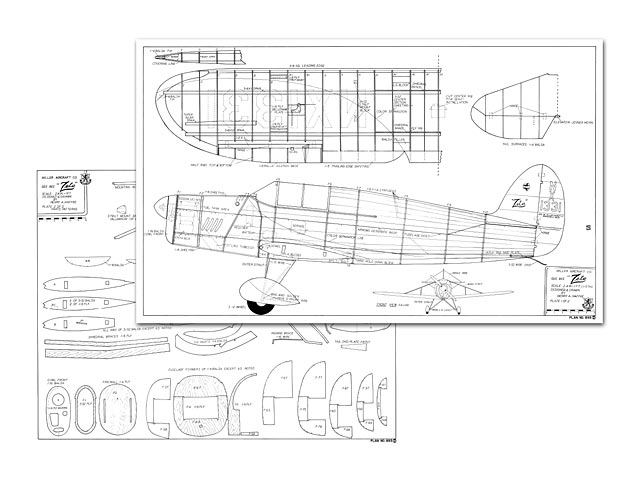 The Zeta was such a beautiful aircraft that I could not resist doing a model of it. It had excellent proportions for a model and, since it had been very aerobatic, it seemed a good bet that the model would also inherit its fine flying characteristics. With the help of Pete Miller and Bob Granville, I obtained a fine collection of photos of the Zeta.

With all this documentation, I was able to do a very accurate rendition of the Zeta I had several other Gee Bee projects under way so did not have time to start another, but my good friend Joe Gallagher (who had built two previous contest winning Gee Bees from my drawings) agreed to build the first one. I designed the model in 1/5 Scale at his request and as soon as I had the pencil drawings done, he started on the model. He had it finished in a short time and it was test flown by our chief test pilot supreme, Sid Clements, who has tested most of my designs. Sid reported excellent flying characteristics and we had another winner.

It was flown in five contests during its first season of flying and took three first places, a second, and a third. Its first in was at the Northern Connecticut Fly In where we went specifically so that Pete Miller could see it fly as his home is only a short distance from the site of that contest. Pete was thrilled to see a model of his creation fly using radio control and this was the first time he had ever seen a model flown by R/C. To top everything of the Zeta was awarded first place in the event which had our entire crew very pleased.

Construction. The model is not difficult to build and everything is pretty normal. The landing gear is a little different from most aircraft as the main landing gear struts emerge from the fuselage centerline with an outboard shock strut connected to the wing center section. Other unique differences in the Zeta, is the wing strut arrangement. The wing struts were attached to the windshield bow structure which gave a lot of strength to the real craft and, even though not needed on the model, it would be a shame to omit it as this is part of the Zeta's character. These struts were made from streamline aluminum tubing which was assembled together with epoxy. It is plugged into a tube installed at the windshield bow and the other end is bolted to brackets built into the wing.

Fuselage: Make up two fuselage sides of 1/8 x 48 in sheet balsa. The basic sides are shown on the plans with arrows. Note that the rear end beyond F-9 is raised to support the stabilizer. Mark each side for bulkhead locations. Cut all bulkheads from the proper material as shown on the patterns. Locate engine mount on F-2 and drill for mounting bolts. Also drill holes for fuel lines and throttle linkage. Cut out the two oval shaped holes for the cooling tubes. The cooling tubes are made from cardboard tubes on which Coverite is rolled. Trim the oval holes to fit the tubes.

Next, assemble all bulkheads on the basic sides after marking stringer locations on each bulkhead. It is best not to cut stringer notches until after assembly to assure straight stringers..."

Update 8/12/2016: added the final missing page to the article file, thanks to Gunars. 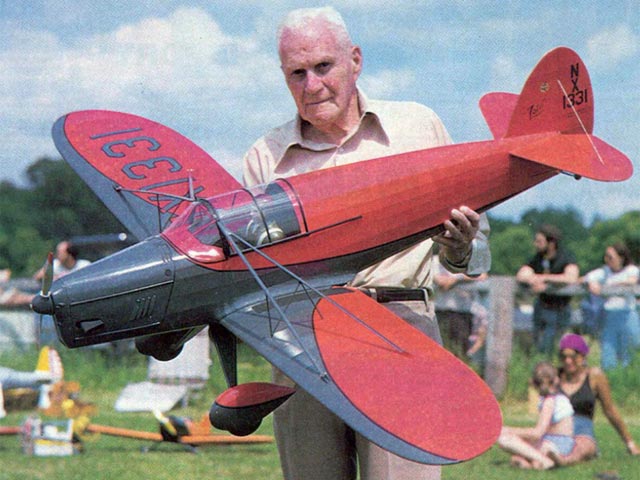 The C of G is not shown on the plan or text. I have started building and would appreciate your help. Thanks.
EJK - 25/11/2018
Hi, l bought the plan back in the 1980s and put it aside until now! I have started to build and the C of G location is not shown on the plan nor mentioned in the building notes. If subsequently it has been shown I'd appreciate a reply.
EamonnJKeenan - 31/01/2019
Eamonn, Since the Gee Bee Zata has straight leading and trailing edges, and no taper or wing sweep, a CG location of 25% of the chord line will be a safe place to start. Regards,
Joe A - 01/02/2019
Thanks Joe, a secure starting CG for the initial trimming flights indeed.
EJK - 08/02/2019
Add a comment