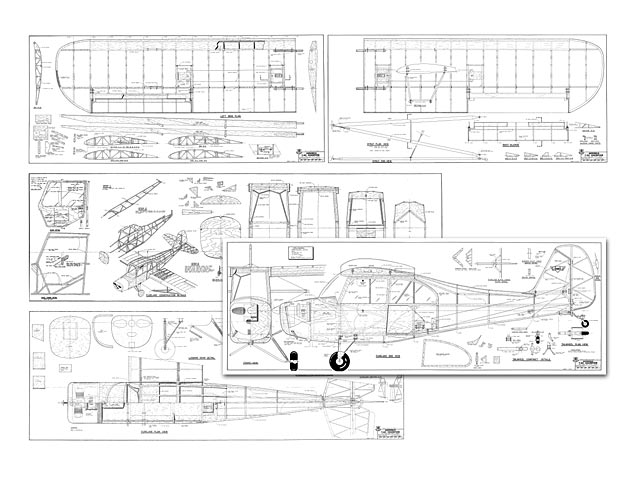 Regular readers of RC Modeler magazine will recall on article on John Marquette's 1/3rd scale Aeronca 7-AC and its dramatic appearance on the cover of the October 1987 issue. It drew letters and comments from many parts of the world and a request from Dick Kidd at RCM for a construction article. Like many modelers, John had built the model from sketches which he had scaled up. He did no work from a fully detailed construction plan. When John talked about 'scratch building', he meant just that - working from measurements taken from the full size aircraft, or a 3-view.

When the plan you see published here had been fully drawn in the United States. Dick Kidd called me at my of in Sydney and said, 'Tony, this thing extends to five sheets. we have never published a 1/3 scale plan before. It will be the largest construction plan we have ever published''. John R Marquette died in August 1990, just three weeks after a copy of the plans arrived from RCM for review. Dick's comments about the size of the project pleased him greatly in his last days. John Marquette never did things by halves.

The most difficult part of this presentation is that John Marquette was not able to write the construction article before he became too ill to do so. Clearly, it is a project which will appeal to the well experienced modeler only, at least in its present form.

The design is not that of a typical scale model. The whole concept is one of replication. It is also clear that most modelers contemplating taking on the task will obtain nearly all of the information they need from the well detailed plans. The original model did not employ spruce in its construction as that material is not generally available in Australia. A Malayan timber called Aluce was used. However, intending builders may certainly use spruce. In reviewing the plans, John said this should not involve any weight penalty. Operation of the model's flying surfaces is by cable, as with the full size aircraft. This factor applies throughout most of the construction.

We always considered the operation of the landing gear on the full size airplane as one of its finest features. It was way ahead of its time in landing gear design. John Marquette was keen to duplicate this in miniature and the plans show a good illustration of the parts which need to be made.

John always felt that kit manufacturers marketing versions of the Aeronca 7-AC had failed to get the windscreen right. This airplane uses a blown 'bubble' windscreen and a large oven or other substantial means will be needed for this task. Once a male mould is made, a local blow molding company shoulld have no trouble in producing a copy of it. However it will be important to use 1/16 in plexiglass for the windscreen. With a bubble of material any thinner than this, damage will result.

The original model had a flying weight of 35 lbs. A Tartan G-77 engine was used. Considerable propeller trouble was encountered with the multi-bolt attachment system on the older model Tartan, thus John's modification to a single bolt prop mounting.

With this, the Tartan has no trouble handling the weight and remembering the fact that the full size 7-AC only has 65 horsepower, the realism in the way this model handles has to be seen to be believed.

The experienced modeler on studying these plans (which can take hours, believe me!) will come to the conclusion that much could be done to remove weight and construction time from this design. That is a proposition which John Marquette readily agreed with. Certainly, if a kit manufacturer were to consider producing this design, plenty would be done in this area. The one thing which should not be attempted by a builder of this model is to beef it up. The model is very strong as it is currently illustrated and it has very forgiving flight characteristics.

Of course other engines could be contemplated to supply the power. When it is remembered that the model was built in 1984, there has been a quantum leap in technology for large model aircraft engines during the intervening years.

Solartex was used to cover the original model and it was painted with automotive enamel. Modelers thinking of building the Aeronca 7-AC have a wonderful factor going for them: All of these aircraft left the Middletown, Ohio plant in the same color scheme! As a small aside, when we looked at the many Aeronca 7-AC airplanes at Oshkosh, before buying our own, it was noticed that they were all painted in different shades of orange and yellow. Whose was right? When we restored our 7-AC in Sydney, we researched the color schemes thoroughly and could still get no answer as to which were the 'right' shades to use. Finally, I said: Look, we're doing this in Australia! This is the only Aeronca 7-AC in the country, surely nobody will know the difference!

When we entered the airplane for its first classic competition, the judges were experienced EAA judges from Oshkosh who knew all about color schemes for Aeroncas! We still won the competition.

While the task of building John Marquette's 1/3 scale Aeronca looks a daunting one, I can assure you it is worth the effort. Unlike our situation in Australia, most parts of the US and Canada have 'building seasons' when it is not practical to fly. Maybe this will take two of those to get through. John Marquette estimated that the project took him 1,000 hours. But that included research and design time. If you do decide to take on the job, one thing is certain..." 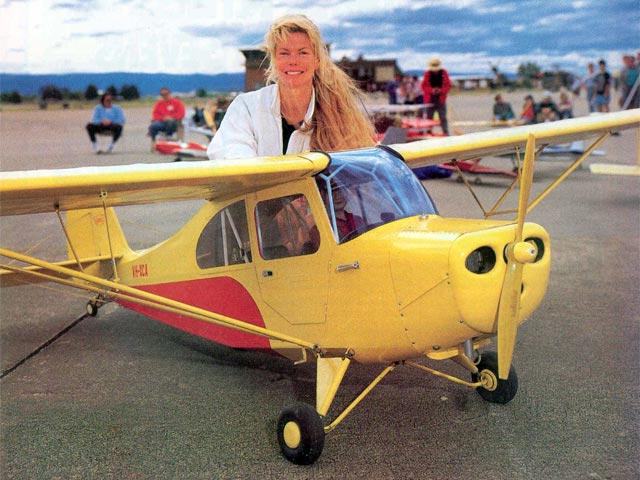