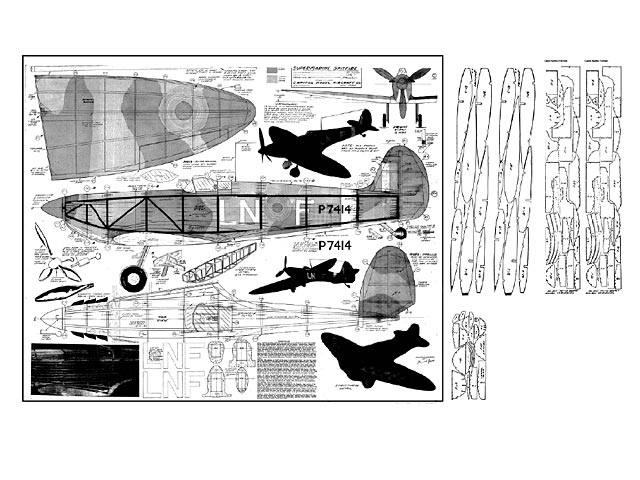 Quote: "Hi Steve and Mary, I noticed that derick had trouble reading the construction notes for oz601 Supermarine Spitfire. I struggled with this one myself. The words were used a little different than what I am used to so I am sure there are some errors but the gist is there. The missing 'spar' is is not a spar but the leading edge of the wing. I can see why someone would miss the leading edge labeling. Showing the plan-form for a leading edge is not usual to be on a model plan. Gene"

Before beginning to build, study the plan carefully, also referring to it from time to time. In this way, possible mistakes may be avoided; and the process of construction, especially to the inexperienced builder, will be easier and more pleasant. Certain points, which at first glance, may appear to be complicated, will of themselves become plain and coherent, as the step by step construction progresses. If this perfectly designed plan is followed carefully, the builder will be rewarded by a beautiful flying model that is extra sturdy and authentic.

To begin, fasten down the plan with thumb tacks on a large flat surface, it is best to use a soft wooden surface, such as pine, etc, since the soft surface permits the injection of pins; the pins being essential to the building, since in most phases of construction, they (pins) are used to hold the formation of the construction in place while the cement sets. Place a sheet of wax paper over the surface of the section being constructed, in order to prevent the cement from adhering to the plan. Cement will not adhere to the waxed surfaced.

FUSELAGE: The fuselage or 'body' of the plane is usually built first. Lay down the longerons on the SIDE VIEW of the plan surface, holding them in place by means of pins. Then set out the upright braces into position. After the complete side is built, allow the cement to set for about 30 minutes. Remove the completed side, and build another just like it. When the two sides are completed, cement them together at the tail posts, after which cement the top and bottom cross braces in position as shown by the TOP VIEW. (SEE INNER FRAME DETAIL). After the inner frame is completed, cut out the formers from the printed balsa sheet, and cement to the frame in their designated positions. Formers indicated by F-1, F-2, etc. Now attach the stringers to the formers, according to the notches in the formers. For best stringer alignment, NOTCH THE FORMERS AFTER THE FORMERS ARE CEMENTED IN POSITION ON THE FRAME, taking note that the stringer follows a straight line. Do not notch the former too deeply, rather leaving half of the stringer out of the notch. This will allow a better covering.

Wings: Cut out all ribs from the printed sheet, also the wing tips. Pin the main spar take position on the plan surface. Cement the ribs in their respective positions to the main spar. Add the leading and trailing edges, top spars and the tips. IMPORTANT: To build the left wing, apply a little oil or grease to the wing drawing on the plan. This makes the plan translucent. Then turn the plan over on the reverse side, and follow the same procedure.

TAIL SECTION: Build on the plan surface as indicated.

COVERING: Clear dope is used to adhere the covering to the framework. Each section of the plane, such as rudder, stabilizer, wings, etc, should be covered before final assembly. Cover a small portion at a time in order to prevent wrinkly work. Apply the dope only to the OUTER EXTREMITIES of the portion being covered, taking care not to stretch or pull the covering, rather placing it on a bit loosely and lightly. After all the sections have been covered, spray lightly with water from an insect sprayer. The sections, when drying from the spray should shrink up with a firm, drum like finish. It is good to dope each section before the sections are cemented together in final assembly.

ASSEMBLY: Cement the wings to their mounts, also the tail sections. Pins may be used to hold the various sections in place while the cement sets. Wherever dope is used as an adhesive for covering, the covering should be applied at once, since dope dries quickly. Cut the insignias and letters with a sharp razor blade." 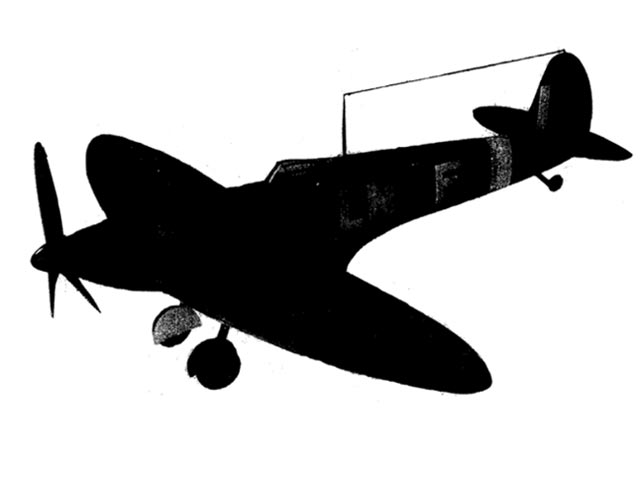 Top piece of plan is missing so spar drawing is incomplete, text just about unreadable. Low resolution scan.
derick - 04/09/2020
This scan is all we have. Feel free to submit a better scan, for us all to admire.
SteveWMD - 04/09/2020
Add a comment