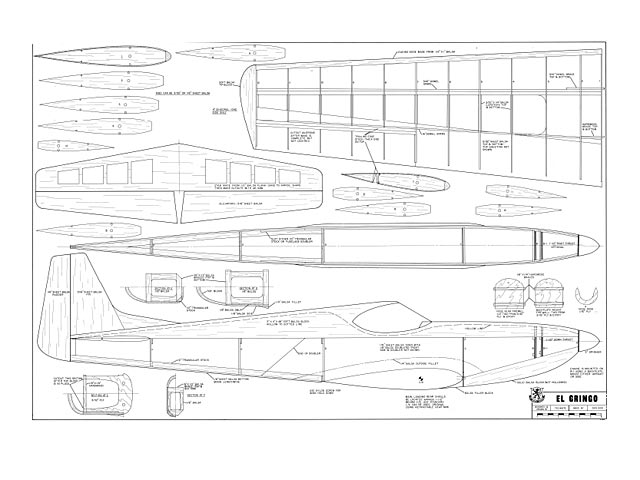 Quote: "El Gringo has won more trophies in past few years that almost any R/C design. By Ted White.

I would like to be able to say that l designed the El Gringo from scratch with no help, and that it was all mathematically and scientifically engineered. However, needless to say, this is not true. It is a combination of airplanes that I have flown or have seen flown. There are three airplanes, in particular, that I considered to have both the lines, stability and manuverability I wanted. One of them was Jack Butler's 'Moody'. Another was Martin Moad's El Toro (oz1529) and the third was Eddie Morgan's take off on the Moody. Having flown the El Toro and Eddie Morgan's Moody, they were found to be very fast and extremely smooth in manuevers. However, wanting an airplane that I could call my own and incorporating some pet ideas of my own resulted in the design and construction of the El Gringo.

Wanting stability in the wind, I figured that a high wing loading and rather long tail moment was needed, i also wanted my airplane to look as much like a real airplane as possible. Idon't think that with proportional control, a full house stunt ship has to look like a model. Not wanting to add nose weight, the moment was made long by normal standards. 48 in seemed a good length for the fuselage because this was the longest sheet balsa I could obtain! I decided that it didn't need the large horizontal and vertical stabilizers that most models employ due to the long tail moment. Another thing that was definitely needed was a symmetrical wing. I like a gentle airplane with a lot of neutral. The symmetrical wing gives me this.

The original El Gringo had a two wheel retractable landing gear. In order to prevent the tendency to nose over, the CG had to be at around 40%. This presented problems on the landing approach with the original vertical stabilizer, since it wouldn't hold a heading when stowed down. So, in order to live with this 40% CG, the vertical stabilizer had to be raised about 1-1/2 in to correct this tendency. After this modification, the airplane settled down and became what I had envisioned. The airplane has had nothing major done to it since then, except a tricycle gear has been substituted and the CG moved up to around 30%. It was found that the two wheel gear, whether retractable or not, was unsuitable because I could not get decent ground points at a contest.

The El Gringo has given time many hours of flying fun. It has had what I consider to be rather good success in Meets that I have attended around the country. It was first built several years ago and it has, - well I'll have to list a few things it has won. It on Second at Phoenix, First at Denver, First at Wichita, Fifth at the NATS, First at Oklahoma City (regular meet), First at the Oklahoma City Invitational Tournament of Champions, First in Las Vegas and First at the RCM Winter Nats as well as bringing home the Grand Champion Trophy in 1968.

A lot of modelers around the country think that the El Gringo looks a lot like Martin Moad's El Toro. The major differences between the two are the airfoil of the wing and the length of the fuselage. The out appearance is somewhat similar although if you had them side by side, they wouldn't look too much alike.

I do think that anyone who decides to build the Gringo will enjoy it, I don't think that a model builder with any experience will have much trouble with the construction of this airplane. I guess start the construction advice with the fuselage. The fuselage top block can easily be traced from the plans and cut out with a band or jig saw. You should first cut a wedge off the 3 in x 4 ft plank..." 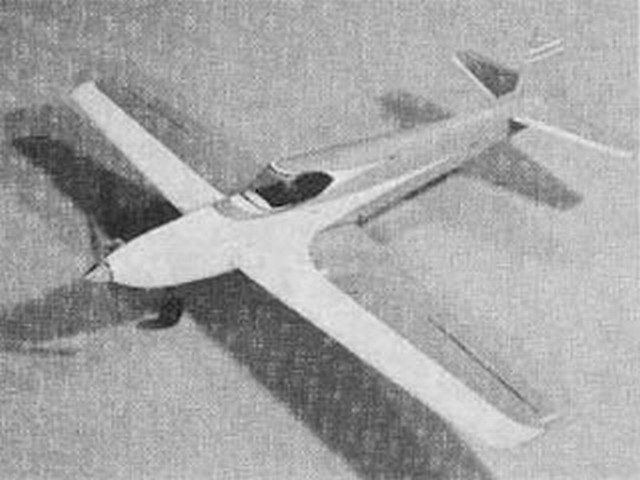