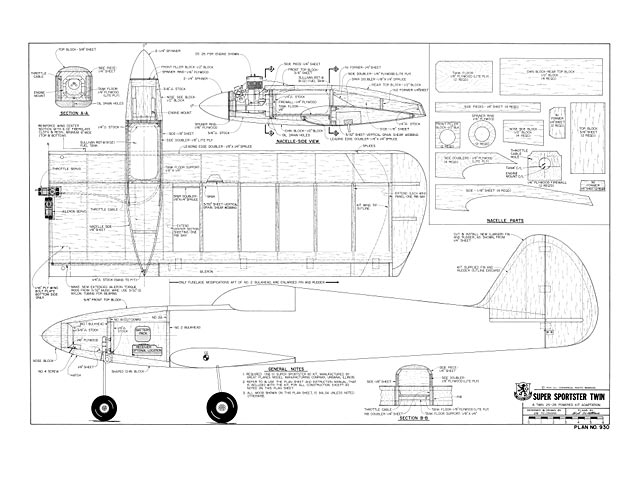 Multi Engined R/C Aircraft have always seemed to me to be exotic and unnecessarily complex. After watching (and hearing) one fly though, you have to admit that there is an undeniable fascination to the sight and sound of a smooth flying twin. Unfortunately, the twin kits on the market generally consist of beautiful but treacherous scale twins, or twin trainers with so many obvious concessions to flyability that they bear no real resemblance to airplanes. And then there are the horror stories... in the end the urge for a twin usually goes on the back burner.

It was a twin Kougar built by our club (The Glendale, California Skyhawks) for the local air show circuit last summer which finally got me directly involved. That Kougar was heavy, complex and sluggish to fly, but impressive in the air. It also proved that a well-mannered, aerobatic and reasonably attractive sport twin was indeed possible.

My favorite sport plane is the Super Sportster 40 (oz2633) by Great Planes. The SS4Os built and flown by my son and I offer an unusual combination of performance, looks and economy. The idea of the Super Sportster Twin was a natural. The initial sketches looked great, but just slapping a couple of engines on the wing of a great single does not get you a great twin. The extra weight needs to he supported by extra wing area to keep the wing loading the same. Engine sizing should provide similar power loading. A longer, narrower wing and larger vertical stabilizer and rudder are needed to improve single engine performance. Finally, engine placement should be such that proper location of the Center of Gravity can be achieved without excessive deadweight added to nose or tail.

These requirements were met in the Super Sportster Twin by extending the wing one bay at each tip, enlarging the fin and rudder 20% and placing the engines 2/3 of the distance from the C.G, to the single engine position. Two 25s provide power loading nearly identical to a single 40.

Each of these changes was designed to minimize the complexity of construction and maximize the use of kit parts. Starting with the standard Super Sportster 40 kit, the fuselage requires only the addition of a second chin block on top, and a nose block in place of the spinner. A small hatch must be cut in the bottom for access to the nosewheel steering hardware. The larger fin and rudder are cut from 1/4" balsa sheet and installed per the kit instructions.

The nacelles go together just like the kit nose, and are designed around 8 oz. tanks. (Running out of fuel in a twin is not a recommended practice.) The engine throttles use flex cables to a single servo in the wing center.

The result is a nimble, attractive and economical sport twin with performance virtually identical with the Super Sportster 40. I am not an expert pilot, but I was so comfortable with this plane that I did stall turns, split S's, four point rolls and low passes at high and low speeds, all on the first flight. The Super Sportster Twin will fly hands off all the way across the field. It will do anything the single super Sportster will do, and its low speed performance is actually a little better. It's super! 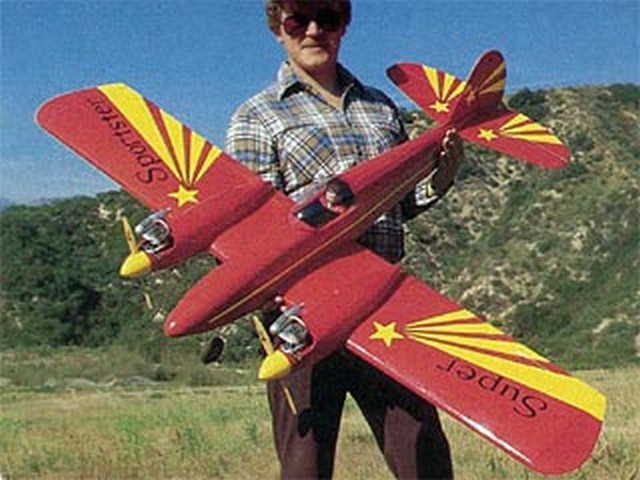