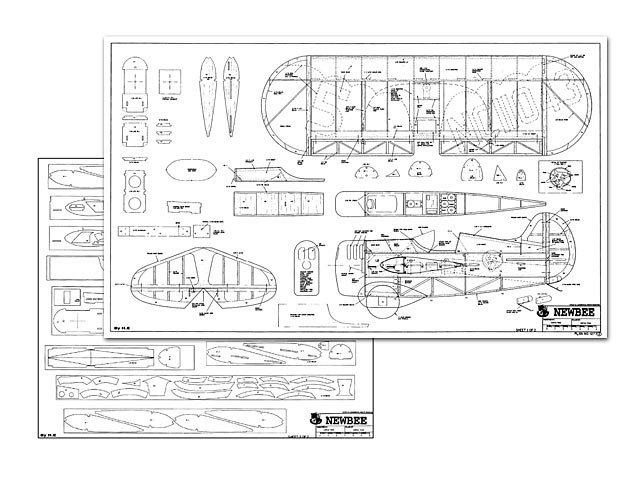 Quote: "As you can see, I am a big fan of old cartoons from the 30's. This plane was inspired by the likes of Betty Boop, Mickey Mouse, and Felix the Cat. It shares nearly the same moments and proportions as my Gee Bee profile fun fly design. In other words, it not only looks like a cartoon plane, it flies like a cartoon plane.

You can putt around, slow and stable, or you can flip and flop and spin and loop with the best of them. In a breeze, it will hang motionless, In a stiff breeze, it will fly backwards! Rough runways are not a problem. It will land upright in fresh hay stubble.

A friend of mine teased me: lf it's not a Gee Bee, what's the point of flying it? So I trimmed my Newbee to look like the Gee Bee model D sportster. Some of my other ideas for trim schemes are the Art Chester Jeep or maybe a P40 Warhawk. I have flown the prototype with a Thunder Tiger GP ,25, and an O.S. .26 Surpass. They both work great, but with the little 4 stroke, it even sounds like a cartoon airplane! I am "currently" working on an electric version: I'll keep you posted.

By the way, the pilot's name is 'Monty Web' (you'll have to ask my daughter, I have no idea). Anyway, he weighs about the same as a ping pang ball, and if there is enough interest I'll try to make him available, (Excellent pilot — nerves of steel). The plastic cowl, wheel pants, and formed aluminum landing gear are available for S18.00, also available is a laser cut parts pack for $30.00 (the laser cut parts pack includes only the parts shown on sheet #2 of the plans).

So now that you just 'haff' to have one, let's get started. This is a one-piece airplane; the wing does not come off, and this is one of the things that makes it so tough. Fortunately, you can build whatever part you like first. I like to start with the fuselage.

Fuselage: Build the lite ply firewallilanding gear/F2 unit. Make sure it is square - the rest of the fuselage alignment depends on this 'box' being square. Put the blind nuts for the landing gear in before you can't get at them. The firewall is lite ply with a 1/16 in aircraft ply doubler glued inside. Install your engine mount hardware before you build the box..." 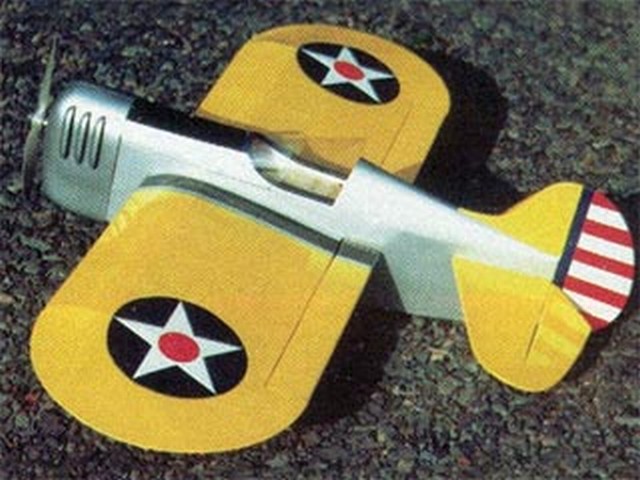