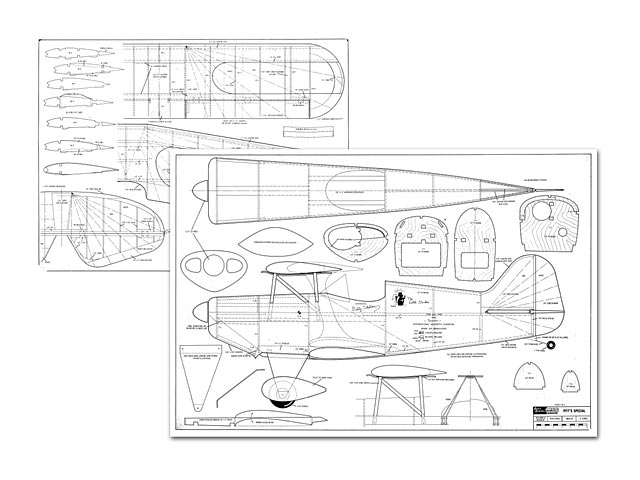 BIPLANE models have always enjoyed a fair amount of popularity. Being partial to biplanes myself I have built and flown a number of them as control-liners. Although I must admit I never enjoyed building and finishing that extra wing, especially when that wing could be going into a new plane! This was in the days when I would build every brainstorm I had, or design that I liked. Now I build fewer planes and pick only the designs that appeal most to me.

Feeling that there must be something to this sudden popularity of R/C biplanes, I felt I had to try one and find out what I was missing. As I build mostly scale or semi-scale, I wanted a design with nice lines that could be adapted to R/C without too much modification.

After much searching and thought I decided that Betty Skelton's colorful Pitts Special, Little Stinker, was just what I was looking for. It has the lines and color scheme that make it stand out at any flying field. Plans were drawn up in a size I felt would accommodate a .45 to .60 engine and full house multi. Wing area wound up at 760 sq in with a span of 52 inches. With a height of a little over 16 inches it looks much larger than it actually is. A K&B 45 with a 12-5 prop was used for power on the prototype. This proved to be ample but also the minimum recommended engine size. Radio equipment consisted of an Orbit 10 and Transmite servos. I am sure that a 6 channel with coupled ailerons and rudder would more than keep things under control.

Although not to exact scale, there is no mistake that this is a Pitts Special. One change that was felt to be necessary was to move the wheels closer to the center of gravity in order to improve ground handling. Nothing is more discouraging than to have a plane you can't get off the ground! This I found out from experience with a J-3 Cub that loved to chase its tail all over the field! Come to think of it, I don't believe it ever did make a successful take off. The Pitts, on the other hand, seldom fails to get off the ground on the first attempt.

Construction is all common practice with no special tools or techniques required. That is, except for the cabane struts. These are fabricated from steel strips and joined with pop rivets. I found this much easier and more accurate than using music wire and solder...."

Article pages, text and pics, thanks to JPM. 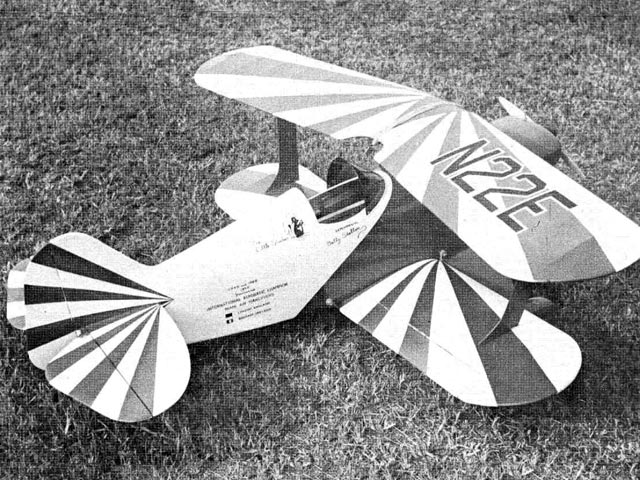