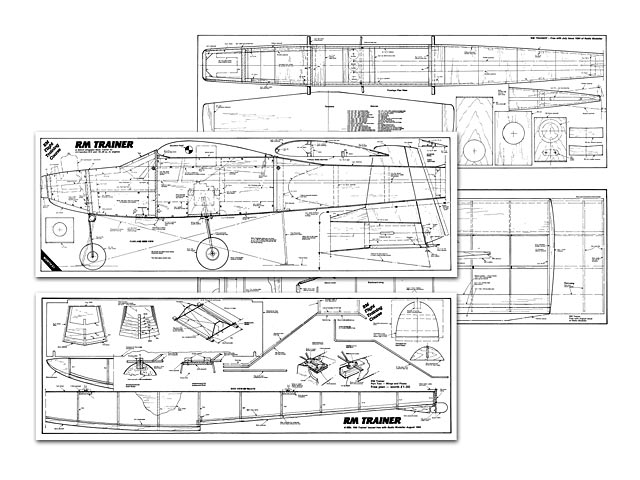 RM Trainer. RC trainer for .20 power, or larger for floats.

Quote: "LET ONE POINT BE MADE absolutely clear, there is no such thing as a perfect R/C training model. All designs have to incorporate a certain degree of compromise to cater for a variety of learners: the lone hands, slow learners, those with natural aptitude, ones using a 'Buddy Box' system and those wanting a more advanced model for training.

How does the 'RM Trainer' fit into the compromise situation? To make it more suitable for the diverse requirements it has been designed with options, it is not one type of aeroplane only; you have a choice on the style to build. The non-aileron version (rudder, elevator and engine throttle control only) is intended for the beginner with limited supervision during flying training - or, if you are prepared for the occasional unscheduled arrival, for the individual determined to learn without any assistance from an experienced modeller.

With the generous wing dihedral, high wing/low set tailplane, reasonable tail moment arm lengths and modest wing loading the model has good inherent stability qualities. However, it is more than a guided free flight model and is capable of handling windy conditions surprisingly well, although the raw beginner is not recommended to attempt to fly the rudder controlled version in adverse weather. The model is aerobatic to the extent of loops, stall turns, rolls (somewhat 'barrely') and it will hold inverted flight in gentle turns, but the main purpose is that of a basic trainer with forgiving qualities.

When ailerons are fitted a lower dihedral angle is incorporated, for better aileron response, the RMTrainer has less positive stability ie it has to be flown and corrected to a greater degree. Despite using the 'old fashioned' Clark Y style wing section (retained for ease of construction and proven characteristics) the model does not exhibit excessive pitch changes - climbing and diving - with the throttle setting changes. Learning to fly with an aileron equipped trainer means that you do not have to convert to the use of ailerons at a later stage, but it is advised that the learner has an instructor standing by during the pre-solo period. It does involve operating four control functions and this requires a degree of co-ordination that may take a little time to master.

Variations of the RM Trainer does not stop there, it can he built as a 'tail dragger' (with a two wheel undercarriage and tail skid) or with a tricycle undercarriage arrangement. Most modern trainers feature three wheel undercarriages, but this is as a result of fashion rather than from functional considerations. 'Trikes' are fine when you are operating from tarmac or short grass, they are less suitable for the rougher ground flying patches and, more apposite, they do not allow you to learn the finer points of take-off and landing. If you have to fly from a really long grass area, or overgrown 'weedy' flying sites, you can dispense with the undercarriage entirely - the model will have to be hand launched and an undercarriage will probably cause it to be turned over on landing.

You will also note, on the fuselage drawing, provision for fitting floats (construction is detailed in the second part). It is not suggested that you learn to fly with the model as a seaplane but it is a very suitable design to learn to fly from water. Although the model is called a 'trainer' we would like to think that it can he classified as a general sports model and we are convinced that it will give plenty of fun and satisfaction to the average club flyer. Later in the series some modifications will be described for increasing the fun aspects of flying - including, at a more seasonable time, the fitting of skis.

Having the free plans divided over two issues of Radio Modeller should give you adequate time to make a good job of the construction and the September issue will advise on the covering, finishing, radio installation and flying of theRM Trainer. This period will also allow you to obtain the necessary radio equipment, engine and the accessories you will need for flying. Have a little patience, build carefully and the results will give you a much better chance of success once you do get into the air.

Engine selection. Engines of similar capacity do not automatically give similar power outputs, some are designed for high speed and power, others are intended for sports use. The RM Trainer is designed for 20 class engines (3.2cc) but this statement needs to be substantiated. For the non-aileron version, built reasonably lightly, any of the sports 19 to 21 engines should be quite adequate, the aileron trainer would benefit from a little more power and the schneurle ported 21s will certainly provide that. When fitted with floats - giving more drag and additional weight - a good 21 will still provide sufficient 'oomph,' but a 25 or 29 would give a reserve of power that can he useful at times.

Any model that is overpowered can cause the learner to get into difficulties and the same is true of too little power. On balance, it is more prudent to err on the side of generous power; any excess can he reduced by fitting an over large propeller, by limiting the throttle opening or using a straight fuel (no nitro-methane content). Trying to increase the power output of an engine is more difficult and may involve fitting of a tuned pipe silencer (or Irvine Super Silencer) and using expensive high nitro content fuels. On page 51 there is a pictorial review of some of the suitable R/C engines for the trainer.

Wood selection. Trying to describe, in words, the characteristics and qualities of suitable balsawood for the various parts of the 'Trainer' airframe is like trying to qualify the beauties of a woman's face - you know what is good when you see it, but it is difficult to verbalise on these attributes. For the total newcomer the best advice is to seek the assistance of an experienced model shop proprietor..."

Quote: "Hi Steve, This is a great David Boddington design published in July, August and September 1984 that seems to have flown under the radar of most folks. The RM Trainer can be built in numerous configurations - it even includes an option for floats! It was designed for .20 to .25 engines. I have stitched together the plans from my originals but believe them to be accurate." 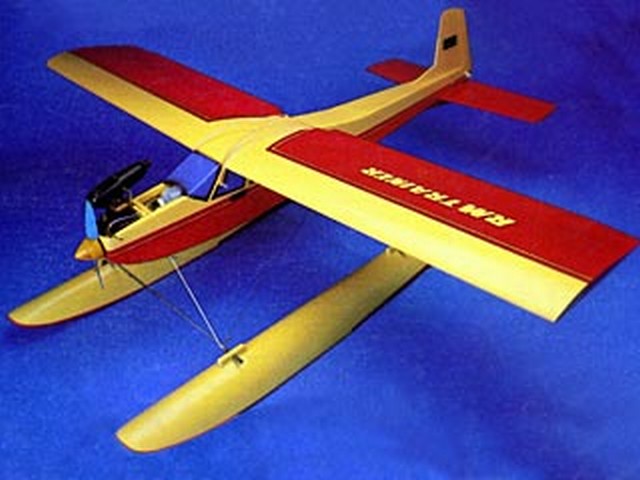 I'm attaching a couple of shots of my RM Trainer [more pics 007, 008]. It's recently built from the plan you hold on your site. It's a great flyer and a nice build. I have mine powered by a 300w electric setup which is just right. I made minimal changes to the fuselage to do the electric install - mainly replacing the tank floor with a liteply tray which extended back into the wing bay area and carried the servos as well. It came out at 3lb with battery and is real docile, it floats along at this weight and lands almost at walking speed.
Nigel - 15/03/2018
Hi Steve and Mary, I thought I'd send you an email to say thank you for all the good work you're doing with plans at Outerzone. I have completed over six models now from Outerzone plans. It is also good to see the gallery and to see proper aeromodellers from around the world.
I am enclosing some photos of the first model I've built from Outerzone plans [pics 009-011]. It is in fact the third one I built having crashed the other two I'm afraid as I was training. The third RM trainer has been enlarged by 120% which is very easy to do nowadays! I passed my bronze medal awarded by the Scottish Aeromodellers Association, so that I can now fly by myself.
Once again thank you very much for all your work,
Chris Royce - 27/04/2020
Add a comment