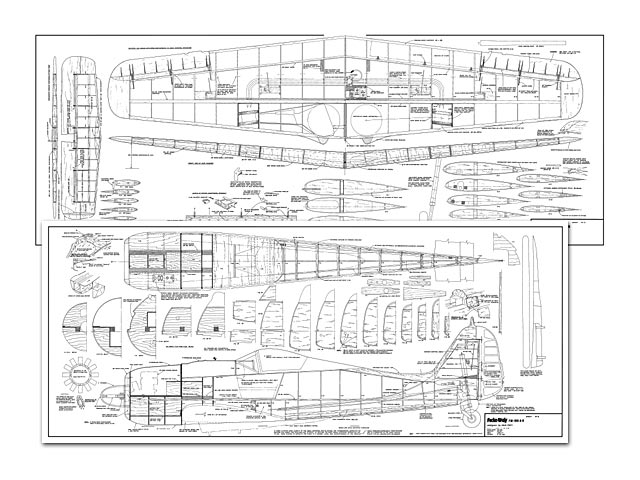 A very common trait among model airplane people (and perhaps especially those inclined toward scale) is a tendency to play favorites. Many builders return over and over again to a certain subject that happens to ring their chimes and, through the years, they make several versions of the same airplane. Perhaps the most well-recognized example is Henry Haffke, who seems to not know that any other airplane than the Gee Bee exists. Or, if he does, he doesn't acknowledge it.

While not so extreme as dear Henry, I'm the same way. There are several ships of which I've made two or more SBDs, Spitfires, Macchi 202s, Me 109s; there are more, but you get the drift. Although variety is the spice of life, in this context we could quote in opposition that practice makes perfect. Certainly, repetition of a well-loved subject will lead to an outstanding model.

This is my umpteenth FW 190. Various factors such as superior equipment and materials, better techniques, more experience and, not the least, the continued accumulation of more accurate and complete data on the full size ship, have made this 190 put all past efforts in the shade. Who among us has not said, 'If I did this again, I could do it better?' I hold that a great model is not designed, it is redesigned.

Upon reflection, it's quite possible that my past attempts at the FW 190 were merely the warm-up exercises necessary to the eventual creation of a definitive model. You need to know what the problems are going to be and my earlier versions, using the best tackle available at the time, showed that a truly magnificent 190 would have to wait for better equipment.

In particular, the landing gear calls for special mention. It is unlikely that any other fighter of WW II has a more severe leg length/wheel size set-up. To lift these legs cleanly and dependably requires a daunting amount of power. Of course, you can take the easy way out and shorten the legs. My last FW 190 of several years ago did exactly this. But there's a price - the proud stance of the aircraft on the ground is lost; the appearance disappointing.

Experiments with the 'Competition Special' air-driven gear units showed
that the set-up required by a true scale gear for an FW 190 could be managed - and easily, at that. More good news - no doors! Except for a few special purpose odd variants, most all 190s had no inner gear doors. The problem would have been minor in any event, as the door lifting mechanism proved out on my earlier Mitsubishi A6M Zero (oz6082) has remained dependable.

The tail wheel retraction system used by the Focke-Wulf is another oddball. This one retracts neither forward nor aft - it retracts straight up! Again, the answer was evolved, some head scratching later.

With the landing gear problem licked, only one other difficulty inherent to a true-scale 'short nosed' FW 190 remained - getting the CG right. This nose is short. Fortunately, the engines we use these days have gotten somewhat heavier and this is a help. Even so, clever design of the structure aft of the wing main spar would be vital; it must be strong but light. No one likes adding lead to the nose of a model. Builders of this model must keep an awareness of this element and avoid all unnecessary weight aft of the marked CG. No nose weight was needed in my own 190, so it can be done.

At this point in the proceedings it becomes a matter of choosing which 190? Of all the many and varied versions - and each one with great appeal - my own final decision favored the A-8. Perhaps this was because, of all the 190s made, the A-8 is the most aggressive..." 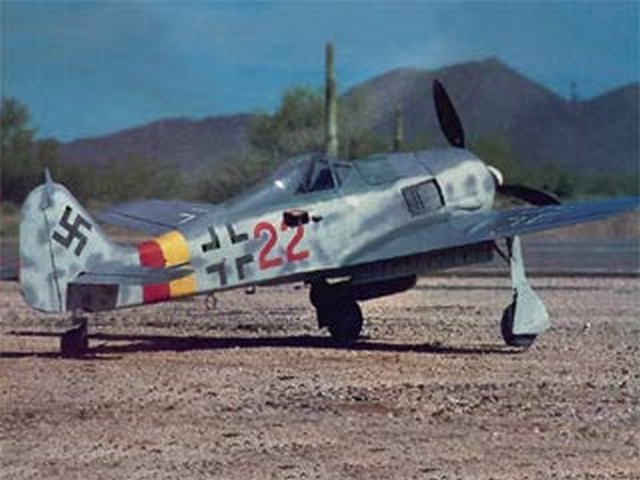