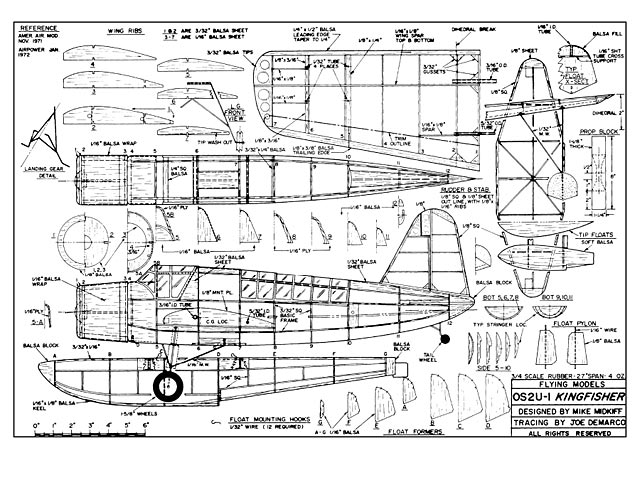 Quote: "No one remembers the Kingfisher except those guys who were plucked out of the sea after their more glamorous Hellcats and Corsairs let them down, or the lonely GI's stationed all over the Pacific who got their valued letters from home in mailsacks tossed out of the observer's hatch. Yet, to most, it still remains a rather obscure aircraft. Surprisingly though, this aircraft played an important role in basic airframe design by being the first aircraft to feature a nonbuckling fuselage. The Kingfisher pioneered the, then new, spot welding technique, thus enabling the construction of a strong monocoque fuselage resulting in substantial weight savings.

Originally designed as an observation aircraft, for battleships and cruisers, the Kingfisher became a master at such diverse duties as rescue, reconnaissance and anti-submarine patrol along with their primary function of directing naval gunnery barrages which accompanied troop landings.

One can imagine the jolting experience it must have been to be launched off a battleship catapult with the same charge as that used to fire a naval five inch shell. Upon returning to its battleship, the Kingfisher would land in the slick created by the mother ship's sudden turn to port or starboard. After securing to a trailing line the little scout would be hoisted aboard by one of the deck cranes.

Of notable exception to the mundane day-in, day-out scouting and patrolling was the aerial victory over a Japanese Zero which occurred while directing bombardment gunfire just before the invasion of Iwo Jima, She might have been slow, but she was maneuverable and sometimes deadly.

The model of the Kingfisher is done in 3/4in = 1 ft which results in a span of 27 inches. I chose to build the pre-war version, OS2U-1, primarily because the Navy had such an attractive color scheme at that time. These colors are available in domestic or Japanese tissue which eliminates the need for spray painting. My model represents an 0S2U-1 Kingfisher from the battleship Mississippi.

The colors used on this model are: fuselage and wing bottoms - light grey; stabilizer, rudder and rear tail cone - blue; top surface of the wings - yellow; in addition using white strips on the fuselage, cowl, and wings. My model has interchangeable floats and landing gear. The prints show both methods of construction, but the float version requires an 8 inch diameter prop whereas the land version should be at least 10 inch diameter..."