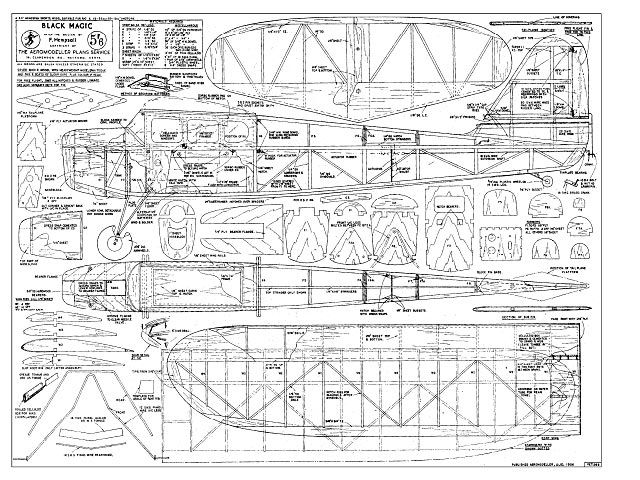 Quote: "BLACK MAGIC was first published in the September 1947 Aeromodeller, and has been a firm favourite of thousands of sport fliers ever since. Good looks, clean lines and snappy reliable performance have accounted for its success.

Reader R Garman, searching for a suitable radio control design for his ED 2.46 decided Black Magic had definite possibilities and wrote to the Editor regarding structural modifications. It was decided to strengthen the mainplane anchorage, the fuselage cabin structure and the wing tips. The fin area was increased and the original knock-off plate type engine mount replaced with an adaptable ply plate on bearers, which will accommodate varying sizes of motor. Mr Garman still favours the old type mounting, however, and says it has saved his crankcase on several occasions, so we leave this particular design feature to the choice of the individual builder.

The new drawing shows installation for the normal battery sizes, e.g., B122 or B123 for H/T and U12 for L/T, etc. Mr Garman, however, uses a set with fairly heavy current consumption and therefore employs heavier batteries.

Those people who have flown radio models extensively will appreciate another suggestion by Mr Garman. Instead of leaving the rear undercarriage legs as one complete length of wire he cuts it through the centre, taps the two ends 4 BA and joins them by means of a 4 BA sleeve. This
enables the undercarriage to be replaced when necessary without disturbing the structure. Those people without taps and dies could easily solder a copper sleeve over the two ends, which would do the job just as usefully.

Another scheme would be to insert a hardwood block between formers F2 and F3 at the bottom of the fuselage and attach by means of bolts inserted in the block, a 14-gauge strip dural one-piece undercarriage. This provides an easily removable unit which can be replaced when necessary and is a popular method in America particularly with radio control kit models such as the Trixter Beam (oz2864) and Live Wire (oz5554) series."

Quote: "Black Magic! Eric Leadley describes the construction of his second Black Magic, a 60 inch span model that will fly on any motor from a geared 500 to a brushless.

About 14 years ago I bought a kit for a 40 (IC) powered biplane, it was a scale model of a Sopwith Pup. This lay around the house for about 2 years or more and never got started, for whatever reason - I cannot remember. I must have finally given up with it because I remember going to the local model shop (Dave Smith Models) and exchanging it for a Flair Black Magic kit. At that time the new OS 26 four stroke had just come out and I had spent hard earned cash on one and this would seem to be an ideal combination.

First Black Magic: Spare time in those days was at a premium so it took a while to put the kit together and by the time it was almost finished I had acquired an electric Buggy motor and a plan for an electric glider called the Kilowatt. The building of this then took over from the finishing of the Magic. This was my introduction to electric flying and to keep the story short - electrics took over.

The glider was finished and flew successfully so I then looked at the half-finished Magic and decided to try it on electric. My thoughts were that if it does not fly electric then I will fit the OS 26. The OS 26 was sold on two years later, unused and still in the box, need I say more? On a Speed 600 with a 3:1 gearbox I had a number of years flying Black Magic until I got fed up with it and sold it to a fellow club member and he is still flying it to this day.

The trouble is, every time I see him out with it I get this feeling that I should have another one - so finally I decided this year to put another one together, using the old plan that I still had.

This Black Magic: My thought this time was to try and make it a little more like the original Black Magic of Fred Hempsall in 1947 with the minimum of alterations that electric and radio entail, bearing in mind that I had not any access to the old drawings, only hearsay and my old plan.

The wings are in two separate sections and plugged together, there are no elevators on the original so I have fitted an all moving tailplane. For ease of transport I have fitted a split undercarriage that plugs into each side of the fuselage and for looks and lightness all the wing, tailplane trailing edge and tips and the whole fin, are all laminated.

Although the extras I have fitted add weight, with careful wood selection, using glue sparingly and using my sanding blocks a lot I do not expect this model to weigh any more than the old one. I do not plan a weight for a model beforehand as some folks do; I just build it and the finished weight decides itself. This is not a step by step 'con-struction write up' but with the aid of a few photographs and the following words this is how I built my second Black Magic.

In photo 1 you can see the start of my building on the very old and discoloured plan. One side is built over the other and to stop the two sides sticking together you might just be able to see the small pieces of plastic sheet I have placed under each joint to keep the glue from weeping through. This is easier than putting a whole sheet of plastic between the two which means you have to remove all the pins from the first and when you do this something always moves somewhere and the two sides are not identical.

The longerons are stiff 1/4 in square balsa and all the spacers are a much lighter grade, the diagonals were cut from a sheet of soft, light 1/8 balsa. The almost completed fuselage is shown in photo 2. The hardest part here is bending the longerons around the plywood motor mounting plate, this was made easier by cutting lots of small vertical slots in the longerons and applying glue to the inside edge then drawing the sides in with a clamp. Do not try to hold this in with your hands..." 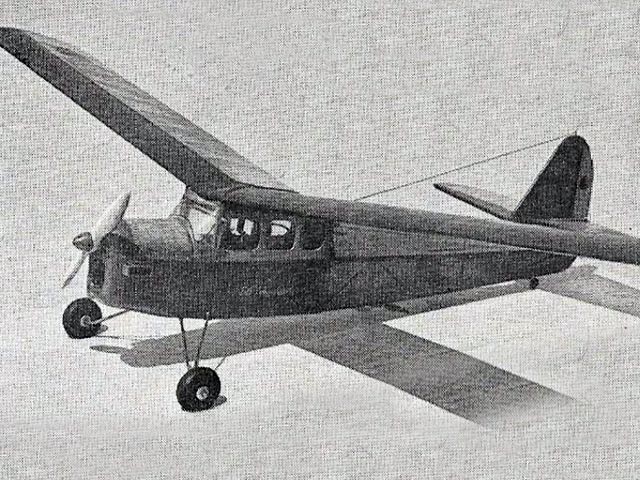