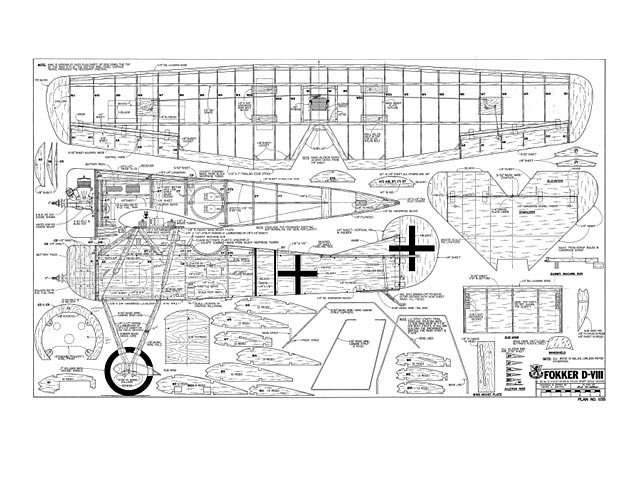 Quote: "At last, a 1/6 scale model for WWI enthusiasts that flies as good as it looks.

I better start this article with a little explanation for those scale modelers who have been around for more than a couple of years. I know you are wondering - How can this be, that Henry Haffke is doing a model that isn't a Gee Bee? There is a very simple reason for this. I didn't always design Gee Bees. As a matter of fact, I designed the D-VIII 14 years ago, before doing my first Gee Bee. I designed it to fly in the Rhinebeck WWI contest. I chose the D-VIII because it only had one wing, and figured I could build this quicker than any other WWI aircraft. Also, I had seen a couple of photos in the EAA Sport Aviation magazine of a beautiful replica that had been built by Ed Swearingen, and felt I could probably get a couple more photos in color of an existing aircraft for my documentation.

I decided on a scale of 2in = 1 ft for various reasons. I wanted a .40 powered model and the scale was right for that. Williams Bros makes a 1/6 model rotary engine, as well as a Spandau machine gun and the required 5 in vintage wheels. Also, when the model was designed, Coverite had a 2 in scale lozenge covering available which I could use. Unfortunately, the covering had been discontinued when I called to order some. However, I had the good fortune to find two rolls of the discontinued material in a hobby shop later on. (Editor's note: RCM has a lozenge stencil available that was drawn for the Fokker D-VII (oz9264) by G Whitehead, plan #996A - $5.50.)

With everything I needed on hand, I drew up the plans, cut out all the parts, and started work on the model. I framed up the fuselage and wing, and then the project got put on hold as I got the urge to design and build a Gee Bee. The Gee Bees were built in Springfield, Massachusetts, where I was born, and over the next 13 years I designed and built nothing but Gee Bees and even wrote a book about them. Three years ago, my wife and I bought a motel in Vermont and my modeling ended as the motel took up all my time.

Finally this past summer, it looked like I would have time to get back to model building. Rhinebeck was only a 2-hour drive and I thought of attending their 25th Anniversary event in September. I wanted to fly a new model and thought of the Fokker I had started so long ago. I hunted up all the materials I had bought to build the Fokker. When I had located everything I needed, I set up my shop and got back to work on the D-VIII which had been started 14 years ago. If you're ready, let's get started on building a D-VIII.

Construction. Fuselage. Start by making the basic fuselage sides of 1/8 balsa sheet. If you are using 4 in wide sheet as I did, it will be necessary to add a 1/2 in strip to the bottom of the 4 in sheet.

Draw a line 3/16 back from the forward edge on the inside of each basic side. Prepare the 1/4 x 4 in fuselage doublers. Make cutouts for grooved landing gear mount blocks in the doublers. Cut grooved landing gear mount blocks to a length of 4-5/16 in. Carefully form the 1/16 wire wing struts. (These must be installed with the fuselage doubler.) Cut a 1/16 groove in the doubler (refer to fuselage side view and note broken lines showing location of the strut wires in doubler). Make the groove on the outside of each doubler. Cut out the fire wall and all other fuselage formers. If everything is done to this point, you are now ready to start the fuselage assembly..." 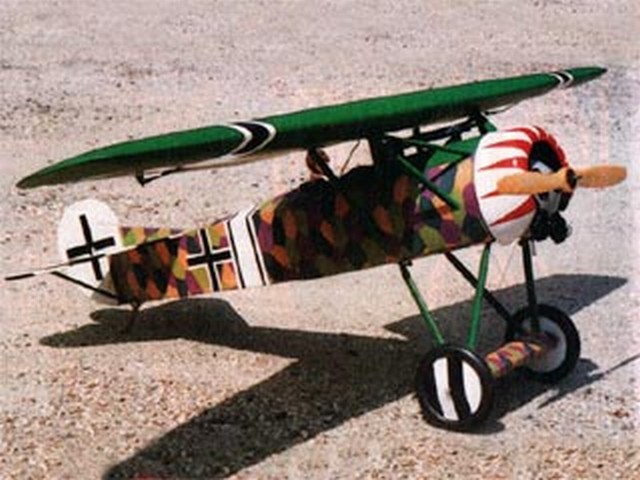