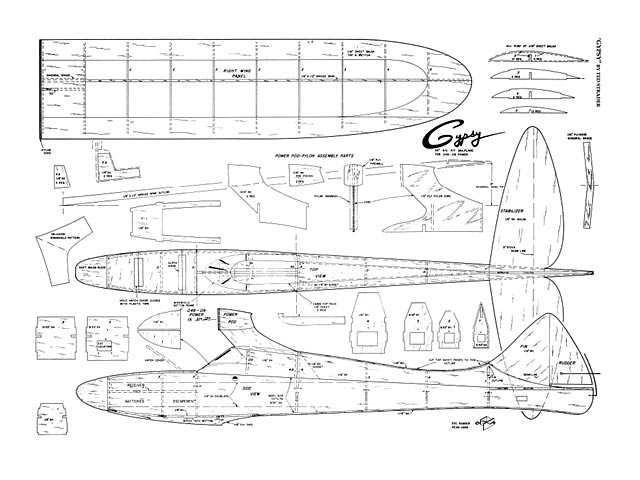 Quote: "What do you do for an encore? This is a favorite query in showbiz often asked after a successful performance or sometimes during the booking of an act. It wasn't long after our little Nomad (oz6246) became an established star that we began hearing this same question. There was more substance to the questioning than just a desire for an encore. A great many modelers who built the Nomad, many taking their first successful steps into the fascinating field of R/C, asked us if we'd bring out a slightly larger sailplane which would be as easy to build, yet carry a little greater payload and use a greater range of engines.

With hat in hand we offer the Gypsy and hope it answers some or all aspects of the question relating to an encore! The Gypsy, in almost the identical form presented here, was originally scheduled as the main event and the Nomad destined to go as an encore. But, as so often happens with our designing activities, we twist things around and frequently present the successor first! In all seriousness, many sailplane enthusiasts, whether they flew the earlier Nomad or not, expressed a great deal of interest in a model of similar simplicity, yet slightly larger size. Wider use of the more abundant variety of .049 and .09 engines as well as the large volume of receiving equipment whch was too large or heavy for the rather limited Nomad, seemed to justify the Gypsy's creation. And, while the actual volume of available space is not excessively greater than the Nomad, the payload is considerably larger, making this ship more flexible.

Now that our encore has been performed, I'll bet that many, like myself, will install a relayless receiver and a simple escapement just like the majority used in the Nomad! I am using four pencells, rather than two. In other words, two sets of two pencells - I may snag a thermal and stay up for a few days! (I won't mention that I needed the extra weight for balance!) Before we get down to the business of putting together, here are some an-swers to some questions you may have about the performance - especially when you ponder the wisdom of trying to tickle clouds with an .049 pulling a 60 incher..." 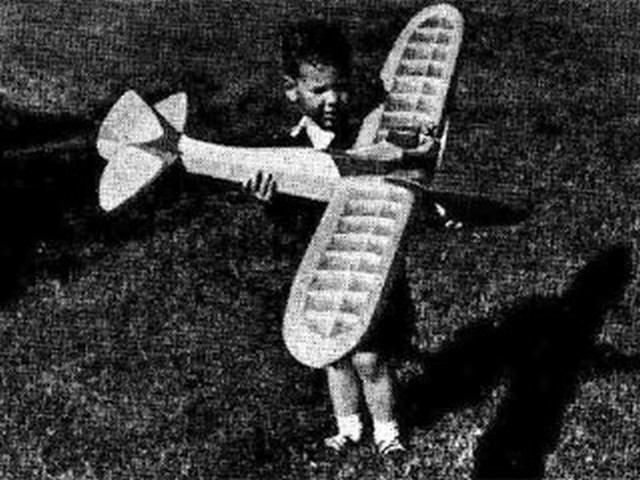 I built one of these in 1964. My buddy, Tom Barnes, bought the kit and I used his plans for mine. As with many of Ted's designs, it was a little shy on dihedral for rudder only control. It would turn, slowly, but once you started a turn it was really slow to stop it, almost impossible to fly in the wind. If you add some dihedral I think it would be fine, might make a good electric nowadays. Ailerons would be the best cure....Thanks for your efforts preserving these classics.
DougSmith - 27/09/2014
Add a comment