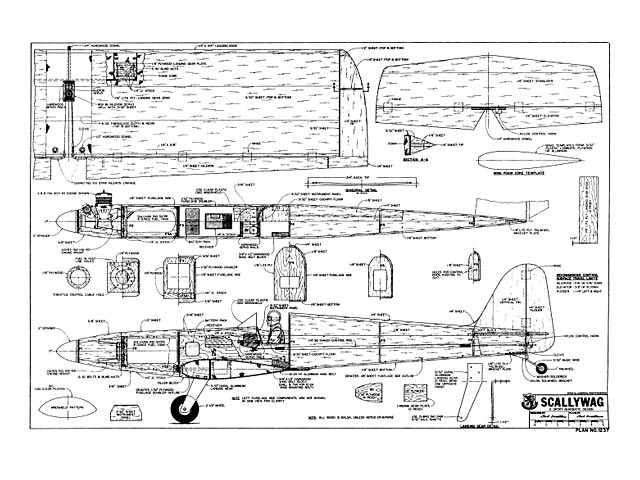 Quote: "This Slick .40-.46 Powered Sport Flier Builds Quickly And is Loaded With Performance.

The Scallywag was designed in an effort to produce a highly acrobatic, fun-to-fly, sport aircraft with a sleek or racy appearance. It had to be relatively easy and inexpensive to build, possess nimble and responsive in-flight qualities and still be docile enough to be well within the piloting capabilities of any Sunday or sport flier.

Construction of a Scallywag is very basic and via conventional building methods. It. is designed to be adequately powered by any sport type .40 - .46 (2-stroke) R/C engine. While a higher-powered ABC Schnuerie ported engine, even equipped with a tuned pipe, could be used, it really isn't necessary.

I elected to use a K&B (No 4011) .40 engine with its standard muffler in my Scallywag and it proved to be an ideally suited engine. Master Airscrew and APC 10 x 6 propellers were used and both performed equally well.

The Scallywag wing is a fully symmetrical type that has a fairly thick section, similar to the types that are used on the ultra light-weight competition fun-fly designs or the profile types that perform so well in the air, yet are (in my opinion) so ugly in appearance.

The decision to mount the landing gear in the wing instead of the fuselage was done for two reasons. the first being that the wider stance of the gear legs produces better tracking during the take-off run and superior ground handling characteristics, and the second being that I believe it just looks nicer and hopefully gives the aircraft a bit of that sleek, World War II fighter look. RC'ers who have been reluctant to try a tail dragger (and those who have experienced ground handling problems with a past design, especially one with a short-coupled fuselage, or one where the landing gear is a fuselage mounted type with the wheel spacing fairly close together), will find the Scallywag to be quite different and surprisingly easy to maneuver on the ground.

An effort was made to keep the Scallywag prototype light in weight without sacrificing strength. This was primarily done by carefully selecting all of the balsa that would be used in constructing the aircraft, using onnly medium and fairly soft grades.

The prototype Scallywag weighed in at 4 lbs 3 oz ready to fly loss fuel, which is quite good for a .40 - .46 size sport airplane with .almost 600 sq in of wing area. I preferred to finish the fuselage with epoxy enamels; so an additional ounce or two of weight could have been saved in that area also, with the use of film type covering.

The Airtronics radio components utilized were all standard size units, with a 600 refAh battery pack, four standard #94102 servos, and a #92765 (FM) receiver. The transmitter used was anAirtronics Infinity 660. There is ample space within the fuselage to easily accommodate:any normal size radio system components.

What else can be said about an R/C design that isn't a scale model and is not intended for use in any type of competitive flying, expet to say that it does fly very well.

It is very acrobatic, yet quite smooth with no bad in-flight characteristics. Any RC'er who has progressed beyond the beginner phase and has mastered a full 4-function type of aircraft, will have no trouble in flying a Scallywag. From a construction viewpoint, any modeler who has built a few wood type kits and has only basic scratch-building skills shouldn't have any difficulty in successfully constructing a Scallywag.

CONSTRUCTION: It is suggested that before construction is started, the builder first cut out all of the shaped parts as shown in the construction photo. These parts include the fuselage.sides and doublers, bulkheads, formers, landing gem, plates, spars, half ribs, sheet tail sur-bees, ailerons, and wingtips. A product that works slick for creating formers, ribs, bulkheads, etc. is See Temp instant template material... " 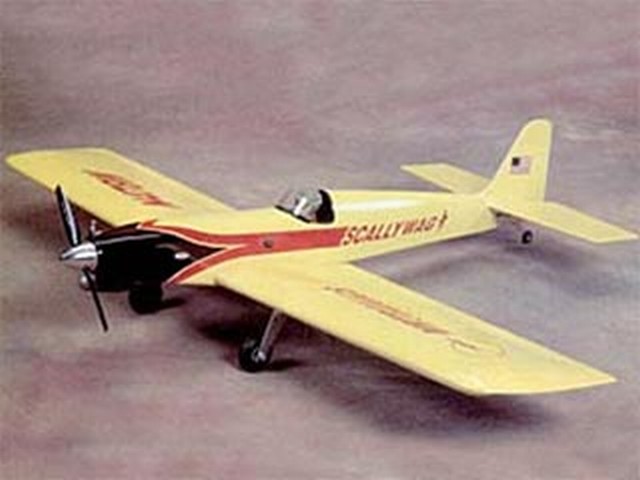