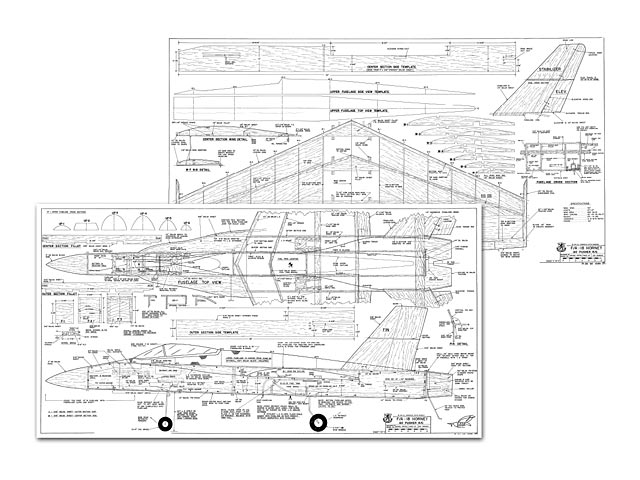 Quote: "Over three years ago. I set out to build a model of the F/A-18 Hornet that would look close to scale yet exhibit gentle flight characteristics. In February 1987, plans for a .40 size pusher prop F/A-18 were completed and within a month the aircraft was ready to fly. I hate to say that it 'flew off the drawing board' - but it did (only a few minor trim adjustments were required on the maiden flight). The prototype used an O.S. .40 FP engine for power but did not utilize a fuel pump. The fuel tank therefore had to be mounted in the rear and a fair bit of nose weight was required to balance it. It could fly fast and slow, was very stable yet maneuverable, and did not snap or spin. I later added an ASP .40 engine and the take-off roll was reduced from 90 ft to about 50 ft! The top end performance also improved. I flew the .40 prototype for close to three years before a loose battery connection resulted in an unplanned decomissioning!

It was a flight video and plans for this .40 size aircraft that originally got RCM interested in this project. RCM has made the 40 size F/A-18 Hornet (oz6167) plans available also.

Given the success of the .40 size model, I decided that a bigger one would be even better. I therefore proceeded to enlarge the .40 size plans (43in span and 50in length) to the .60 size plans featured in this article. Some refinements were incorporated such as retracts and a Perry Regulator Pump so that a mid-mounted fuel tank could be used.

This .60 sized version took two months of off-and-on building to complete. It would have gone quicker had I not had to take construction photos and do up instructions for this article. The .60 aircraft's maiedn flight was on February 25, 1990, and it flew ever bit as well as the .40 sized model did on its first flight. My flying skills are only average, yet I feel very conmfortable with this iarcraft; in fact it flatters my abilities. I am extremely proud of this aircraft and recommend it to anyone who wants a simple, inexpensive, well-behaved, good-looking jet..." 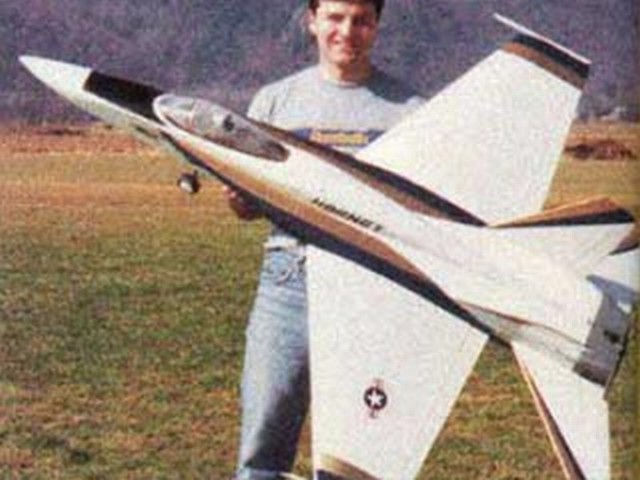