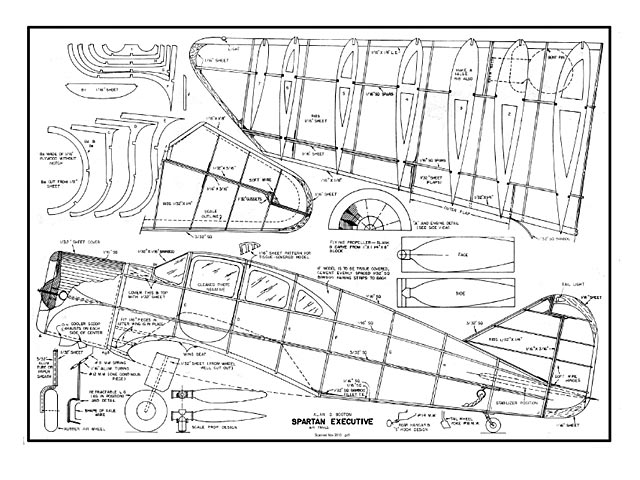 Quote: "A high-performance flying scale model of the Spartan. By Alan D Booton.

THE SPARTAN EXECUTIVE was recently released for export, and has already seen service in China, with only minor military conversions. This new model shows graceful design from any angle and yet lacks nothing in engineering. It is claimed that the Executive handles smoothly at speeds up to its top of 216 mph, which is available from the 450 hp P&W Jr.

The model design retains all the prototype's appearance and flying qualities and yet the structure is com-paratively simple when tissue covering is employed. The accompanying drawings make it possible to choose between three building methods, in keeping with the builder's ability.

First, the plans and instructions can be followed to the letter; second, the model can be completely covered with 1/32 and 1/64 sheet balsa; third, the fuselage can be hollowed to a thin-walled shell from solid blocks, with a choice of balsa or tissue covering for the remainder, or a combination of both.

A novel feature included is the 'wing seat' designed into the fuselage; eliminating the tedious lining-up job.

The following instructions will deal with the simple, light, tissue-covered model. Make a 6 x 8 in sheet of 1/16 balsa plywood by cementing 1/32 x 2 in sheets together, cross-grained. Place books or flat weights on the ply- wood for several hours while studying the drawings and tracing the extra wing and stabilizer patterns.

From the prepared sheet of plywood, cut pairs of the formers, except those noted. The formers are closely grouped on the drawing for material economy.

The method employed is to build one-half of the fuse-lage on the drawing, as shown in the photo, and then build the other half onto the first half. Pin the top and bottom longerons and wing seat, also the short longerons of the cowl, to the drawing. The cowl front (A) and aBb should be finished as shown before installation in the frame. Prebend the two side longerons and cement them in the slots. Do not force any member into place, because it will surely warp the frame when it is removed from the board.

After both sides are assembled, add Bt, the cabin window frames, then cover the cowl and front portion of the frame as noted. Cement the rear hook hangar and tail wheel on as shown. Cement the windshield celluloid on, to the outside, but cement the cabin windows to the inside in separate sections.

WING: Build the wing as a unit with the aid of a right half tracing. Due to the fact that the bottoms of the ribs are curved, the wing parts must be assembled dry and held in place with pins. The rear ends of the ribs can be held up the right distance by inserting a strip of is under the rear at an angle similar to the taper of the trailing edge. After a final check-up, cement all the joints. Note that the aileron spars are omitted from the rib drawings. It is simpler to cut the ribs and insert the aileron parts after the other wing parts are cemented firmly.

Cover all the top of the leading edge from the 1/16 x 1/4 strip to the first top spar with 1/64 sheet, but do not cement to rib 1. Remove all pins except those holding rib 1, loosen all spars at the center, then raise the tips 2-1/8 for the proper dihedral angle. Trim the over-lapped parts and recement at the cen-ter: When thoroughly set, remove from the board and cover the bottom of the leading edge with 1/32 sheet, out to rib 3 only.

LANDING GEAR The retractable landing gear requires no special tools or talent to make. Form the wire parts and cover them with paper wraps or 3/32 aluminum tubing. If tubing is used, the axle and hinge pins must be bent over after the tubing has been forced over the wire. The spring to hold the LG down is merely a piece of #8 music wire bent as shown. Insert one end in the top of the strut between the two larger wires and cement the other end to the rib, on each assembly.

TAIL SURFACES The tail surfaces are also pinned in place dry and then cemented. Use plain stock in the assembly and streamline the parts after they are taken up. Build the stabilizer as a unit.

FINISHING THE MODEL Cover the wing and tail surfaces completely, but leave the lower sides of the fuselage open until the wing is cemented on, then add the bamboo fillet trailing edge and finish covering, including the cowl and wood covering. Add the scoop, exhausts, lights and other protruding detail. If desired, apply a coat of alumi-num dope before lettering, or striping.

Make a 12-foot length of 1/8 flat rubber into a four-loop motor and attach the 'S' hook. Watch through the windshield to catch rear hangar, then attach propeller shaft. The nose plug should be a snug fit to prevent the prop from dangling when the power runs out.

Either test the model to perfection in tall grass, or gradually increase the power on repeated take-offs from some smooth area free from obstacles. The large size and lighter proportionate weight of this model furnish longer, more graceful flights, and it is amazingly stable, considering that it is a low-wing. With more power and a larger contest type propeller, the time can be increased - maybe too much!" 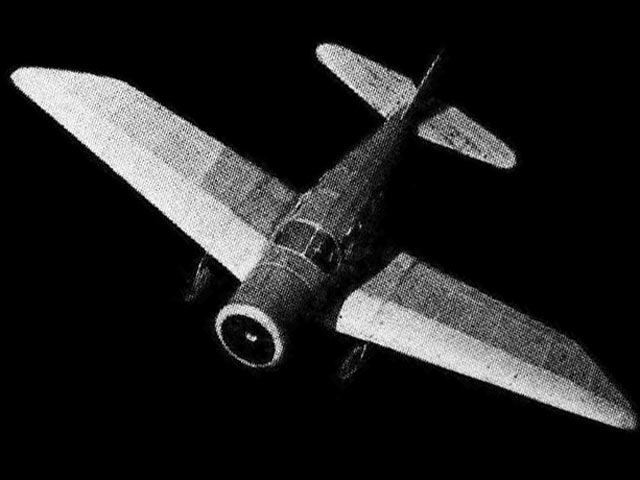