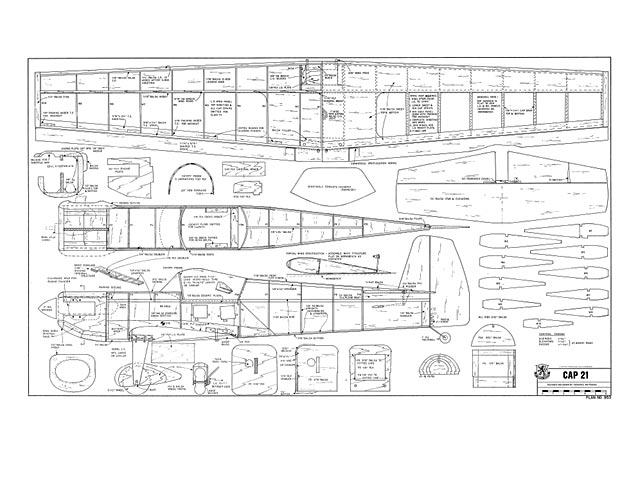 As small aerobatic models go, the CAP 21 presented here has to be one of the best. With a .40 4-stroke up front, there's no difficulty keeping yourself interested in this ship as she's been designed specifically for performing complex aerobatics using just that size of motor. In fact, when I bought the Enya .40 4-C for this aeroplane, I got rid of all my 2-stroke .20s and .25s, deciding that as far as I was concerned, these engines were now obsolete for medium sized models.

I haven't been disappointed with that decision. The effortless puttering note of the 4-stroke is a really welcome relief from the unpleasant yowl of the 2-strokes, whilst going for a lightweight clean lined model enabled me to make full use of the Enya's power. The model presented here is Stand-Off Scale, and it has been modified from the way it initially rose from the building board by having had the wing move forward, and having tail area increased. These changes have made the model very easy to handle, whilst improving its acrobatic prowess at the same time.

I am utilizing some of the bells and whistles on my JR8, employing the coupled flap/elevator and flaperon options. The former combination really squares off sharp corners, whilst drooping the flaperons for landing slows the ship down almost to walking pace. The flaperons come in handy for take-offs as well, and they cut the take-off run in half.

Just recently I've mounted the CAP 21 on floats and, with flaps deployed, take-offs and landings become one heck of a lot easier than with no flaps. So much is the improvement that I would recommend flaps to any budding water plane enthusiast, whatever craft he's modeling.

The novel airfoil shape scores maximum points for ease of building, and the wing needs no jigging strips as you can build it flat on the board. That airfoil works really well, too. It is reminiscent of a U-control aerobatic airfoil, and the CAP can be made to behave just like a ukie, performing square loops and horizontal eights at record low level - just as if she was on 52 foot lines.

Though I'm certainly hooked on the ship, I wasn't always so enthusiastic, and there's a bit of history about her that is worth re-telling. Here it comes!

As first built, she had an unpredictable tip-stall, and the elevators were overly sensitive. The tip-stall occurred in tight loops, when she would snap roll out, and at landing when, if you slowed the ship too much, she dropped a wing. I checked the balance point, only to confirm what I already knew: it was about half an inch forward of the calculated CG position. So the first things I did was to add tail weight, and twist in some wash-out, using a 3 KW electric fan heater to facilitate the twisting. A slight improvement was noted, but nowhere near enough to make this into an aeroplane fit for publication.

Fed up with having 2 oz of tail weight taped to the rear end, I moved the wing forward 3/4 in thus dispensing with the need for the lead. There was a minimal improvement in that the elevators became marginally less sensitive, a result no doubt of lightening the moment arm.

However, I haven't mentioned the best part yet. My CAP, as I explained above, has provision for flaperons. So, on drooping the flaps, whaddaya think I got? More lift? Wrong! My CAP 21 had lift-dumping flaps! The minutest lowering of flap would dip the nose, whilst lowering them 30° would make the ship dive hard. Coupling flaps to elevators actually opened out loops.

Another unusual feature was that for equal elevator deflection, outside loops were about 50% bigger in diameter than inside ones, requiring compensatory elevator differential.

As you can imagine, this plane was a bundle of fun. Since she was a near scale version of a full size design. began to wonder about the super human capabilities of the full size pilots. Certainly they would have to be supremely brave or foolhardy if the real ship behaved remotely like my model.

It was the behaviour with flaps that gave me the clue for a cure. Depressing flaps should increase lift and, therefore, enhance the tip vortices. The resultant down wash from these bigger vortices, on striking the tail, should cause a nose-up reaction, which was obviously missing from my CAP. So I reasoned that I should increase the size of the tail so that it would make better use of whatever down wash existed. I increased tail area from 17% of wing area to 25% by fastening slabs of 1/4 in sheet balsa round the tail outline with pins and Scotch Tape. And, what a change resulted! The elevators were completely desensitized and, instead of being limited to 3/16 in movement, could employ more normal deflections. The tip stall was completely eradicated since the large tail now fully controlled the wing, damping out any tendencies towards unwanted snap rolls. But what of the flaps? Drooping the flaps now caused a gentle nose-up reaction. Eureka! As soon as I arrived back home. I made a whole new bigger tail and we were in business.

It is true to say that this plane, like some of my previous designs, has usefully furthered my knowledge of applied aerodynamics. I hope that the discourse above helps out you modelers as well. Before this experience, I thought that a bad tip-stall could only be reduced and not cured. Moreover, I also thought that the palliatives of wing wash-out and moving the CG forward were the only answers. However, if you recheck the steps I followed, you will note that I moved the CG back, as it was already well forward, and that adding wash-out did next to nothing. So, if you have a model which has a tip-stall problem, just make the tail around 50% bigger and I reckon you'll cure it.

Right. End of lesson and back to the CAP 21. I'll describe maneouvers later and will outline construction now..." 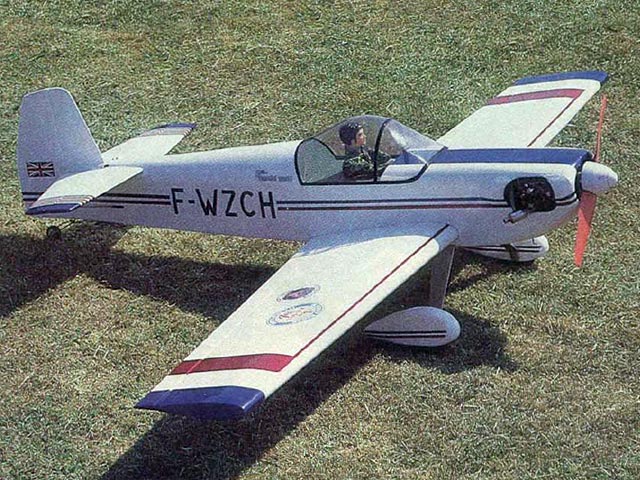