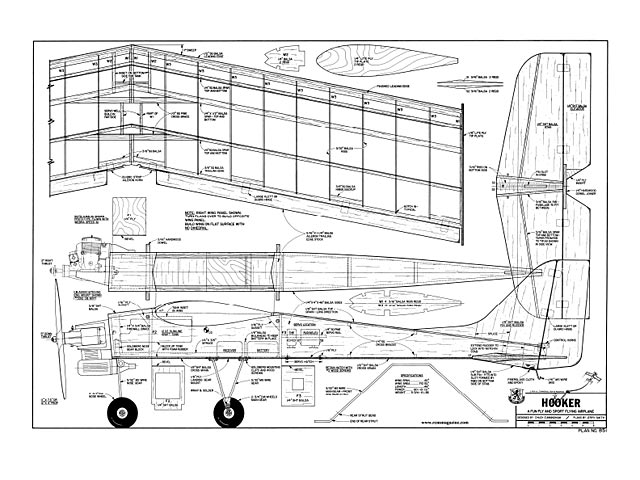 Quote: "This .60-.61 powered Hooker, with its swept-back wing, has been used extensively as a club trainer and in fun-fly's for the Ft. Worth Thunderbirds Club. By Chuck Cunningham.

The Hooker is a fun airplane. She is easy to build, easy to transport and, best of ail, a dream to fly. There is nothing complicated about the Hooker; the swept wings are easy to construct, and the fuselage goes together fast and simple.

Swept wing designs have been around for a long time, It has been proven over the years that by sweeping the wings aft, a tremendous amount of stability can be achieved, and yet the roll rate does not suffer as it does with excess dihedral.

Swept wing models such as the Hooker are quite at home in Fun Fly type contests. She can take off in almost no distance, spin either way at most any throttle setting (either normal or flat spin), roll as fast as you want, loop in a tight radius, and yet come in for landing just about where you want. With swept wing aircraft you can make either a greased-in landing, or rack back and fan down like a 747 coming home.

The Hooker has been used extensively to train beginning fliers; they also find her very easy to handle. Two things aid the Hooker's ability to fly so gently. First, the tip plates contain the airflow over the wings and second, the simply made diamond section airfoil of the horizontal stab keeps the aft end of the aircraft flying much longer than does a flat plate of balsa.

Swept wing designs have been flying here in Texas since the early Sixties, dating back to the Sweeper design by Bernie Haire and Bid Alexander. Pattern aircraft swept wings were pioneered by Don Lowe, and they too have withstood the test of time. If you really want to enjoy a superb flying, easy to build, non-scale-like-anything, airplane then grab your trusty X-Acto knife, stack of balsa, and pot of glue, and get started. You won't be sorry.

Construction. The best way to begin this, or any other model that you want to build, is to first study the plans and to read the construction article over a couple of times. You can 'kit' all of the pieces before starting, or do like I do when scratch building - start working on the fuselage and, then when you're committed, build the wings and then the tail feathers. No matter how you start, it will go very quickly..." 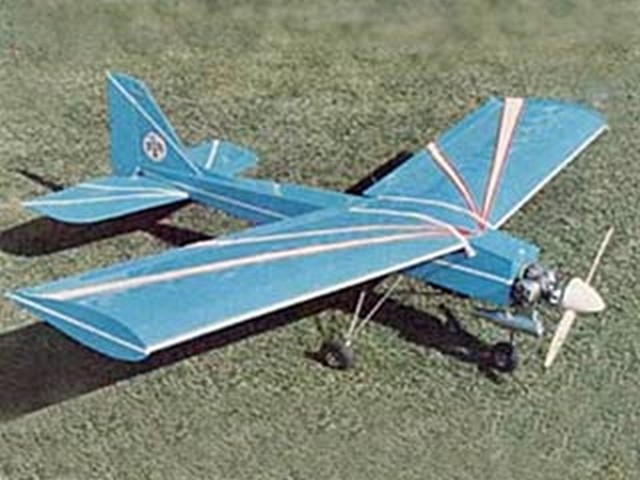 hi Steve, i build the Hooker many years ago, scaled down to a 51 inch wingspan. I used a home cut foamwing and an OS 20 engine for power, and flew like dream straight from the board. Because i scaled it down, i had to shorten the the aileron control wires a bit to give room for the servos. This gave the plane an unbelieveble rollrate. On my way to the flying field for her maiden flight, the suspenders of my bicycle broke, and the whole kaboodle fell off my bike. An onsite repair of the horizontal stab was done in a few minutes, and the maiden flight was no problem. Still have some pictures, i attached them to this mail and would be honored to if you add them to the plans [see more pics 003, 004]. regards,
JohndeKiewit - 26/09/2014
Add a comment