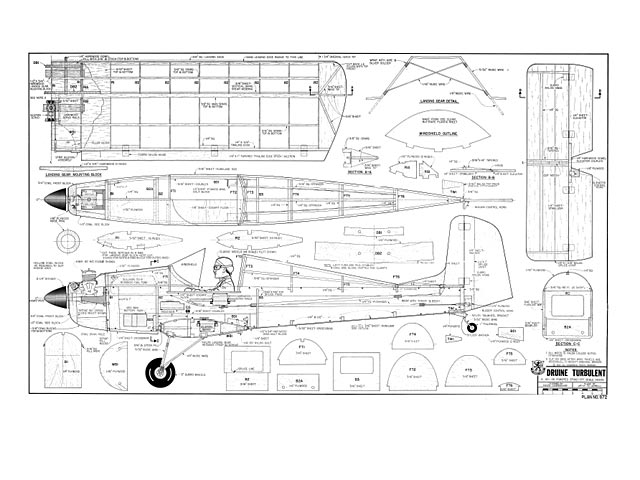 Quote: "The original light plane was designed in the 50's in France and was later manufactured in England. Chuck has designed a .40 powered model of the Turbulent that has turned out to be a super flying machine.

When I was looking around for a new model to design I was taken by the looks of the late Roger Druine's beautiful little Turbulent. I had eyeballed it several times before, but this time decided to do it. The decision has turned out to be a very good one, The original light plane was designed in the 50's in France, and was later manufactured in England. It is a small aircraft, having only a 21 ft 7 in wingspan. It was powered by a converted 45 hp Volkswagen engine. Top speed for this little bird was 109 mph. It took its name, Turbulent, from the small slots located at the outer portions of the wing leading edge. These slots allowed the air to turbulate over the top of the wing at the tips, giving added lift at the tips, and a resulting lower stalling speed. It is a tiny, but beautiful aircraft.

I designed the first of my Turbulent series for a .60 engine. I wanted a bit larger than normal size, so opted for a 6' span. This aircraft is a super flying machine. I then decided that it would be nice to make a Turbulent in a .40 size, so scaled down the .60 bird to .40 size, hut, again, just a bit larger than the normal .40 size machine. This second Turbulent, the one presented here has proven to be just as super a flying machine as its larger sister. In fact, these birds look so well, and fly so great that I have scaled it down one more time for a .19 size. and also scaled it up for a .90 size. If you think that I'm in love with the Turbulent, you're right. I wanted a model that would look good, would fly with the best of them, and yet would retain the good landing characteristics of the full size Turbulent.

I wanted to use a fully symmetrical wing section, so chose to use the airfoil that had proven to be so good for my Hooker design. This airfoil is the 'turbulated' type as it utilizes leading edge spars for strength rather than sheet balsa covering. This loading edge spar makes a turbulated leading edge. thus providing additional lift over all speed ranges. I also am hooked on slightly lifting airfoils for the horizontal stab, so a simple system was incorporated in both aircraft. The combination of the thick 20% airfoil, turbulated leading edge, and slightly lifting tail has made a very super flying model which has no bad tendencies. It will perform any maneuver that you wish and, believe me, anything that uses rudder input really is something with that big flipper hanging on behind. Thanks to Mr Druine's lovely design, it is a beautiful looking model.

Both the .60 size and the .40 size were finished exactly alike with colors and lettering borrowed froni the Swiss. Several years ago RCM presented an absolute scale model of the Druine Turbulent (oz8216) and this looked so good that I had to borrow the color scheme. This Turbulent series is Stand-Off Scale, but more than anything else, it is 'love to fly me'" scale.

The .40 size presented here has a 60 in wingspan. The .60 size has a 72 in wingspan, the .9.0 size has an 84 in wingspan, and the :19 has a 48 in wingspan. Each just a foot longer span than the one before it. The .60 engine is turned on its side, while the .40 is upright. Each method has its good and bad points. The main plus for a side mount is that the exhaust exits underneath the bottom of the aircraft, while the upright engine tends to dump fuel in the cockpit. The side mounted engine is much harder to work on for idle needle valve adjustments, especially if your legs are beginning to show the effects of time. It's your option, turn it either way.

Constructing the Turbulent: General: The entire airframe of the aircraft was constructed using Super T. This makes building quick and easy, but you can use your favorite method if you wish.

Wing: Build the wing first. The reason for this is that once you have the wing constructed it is easy to mate the wing mounting dowels into the fuselage while it is still pinned to the building board. Cut out the wing ribs from 3/32 balsa sheet. You can use either the 'razor blade one at a time' method, or build a stack of balsa sheets and saw them out on a band saw. Make sure that the spar slots are not oversized. Sand the rib pack, and mark the top of the ribs with a felt marking pen. Do this so that you won't get them mixed up - you could make them a bit less than symmetrical, you know. Pin the main spar to the plans. Use the lower rear spar as a rib prop. Pin it to the plans so that the ribs resting on it are exactly square with the building board. In other words, the center of the leading edge, and the center of the trailing edge are exactly the same distance from the board surface. A bit of care here will pay off in a good flying model.

Make a dihedral jig with a bit of scrap balsa, and slant the center section rib to the correct dihedral angle. Glue each of the ribs iriplaceon. the main spar with Super T. Glue the top spar in place, and then the webbing. Glue the trailing edge in place, the leading edge, and the top spars. Remove the wing from the plan and glue the rear lower spar in place. Do not glue the lower front spar in place until later. Set this wing half aside, and turn the plans over and build the left half of the wing on the back side of the plans..."

Hi Mary, Here are a couple of pictures of the Druine Turbulent built from the Outerzone / RCM plan designed by Chuck Cunningham [more pics 005,006]. It will be covered using Sig Koverall and finished with Sig Supercoat Dope. For more details on the build visit http://tslidehaven.com/druine%20turb...
JohnnyB - 10/09/2019
Hi Mary, Here are some pictures of the finished Druine Turbulent from RCM plan 872. Magnum .45 for power and covered with Sig Koverall and Supercoat Dope [pics 007-010]. For more pictures and build visit: http://tslidehaven.com/druine%20turb...
Keep up the great work! Regards,
JohnnyB - 28/10/2020
Add a comment