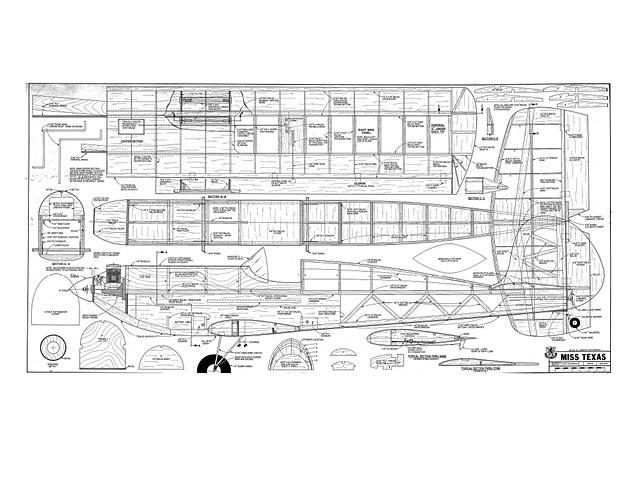 Quote: "If you have built Chuck's Lazy Ace (oz5008) then this is the perfect mate to go with it. 84in span, open cockpit low wing that will make you want to climb in it and go.

Miss Texas is a bigger than average model designed for bigger than average fun flying. She is a good looking throw-back to the light planes of the thirties in looks, and yet has modern lines. She is an open cockpit babe that simply cries out for you to jump in and fly her.

Miss Texas is a .60 powered model that sports an 84 in wing span and a 62 in fuselage, carries almost 1100 square inches of wing area and yet flies with the greatest of ease. Like the Lazy Ace (oz5008) she sports a slightly lifting tail section which makes her extremely docile on both landings and take-offs. Her wide spaced landing gear allows her to track straight down the run way on take-off, and lift into the air is accomplished in about sixty or seventy feet on a paved strip.

I am flying my Miss Texas with a HP .61 for power. Any of the Schnuerle engines will fly her just great, and the less powerful standard sixties will yank her along very well. She was designed to fly on her wings rather than on engine power alone. She does this very well. I have been using both a 12/6, and a 13/5 prop on the engine and I feel that she does even better on the larger prop. A 13 ounce tank is fine, but due to all of the area up front, you could use just about any size fuel tank that you have pocketbook enough to fill.

The radio compartment is large enough to allow a builder wearing boxing gloves to install the equipment, and yet with all of her size, and built-in strength, covered with MonoKote, my Miss Texas weighs in at 83/4 lbs. The construction techniques used on both the wing and the fuselage make for a reasonable light aircraft, but one that is very strong.

A word about the lifting tail section. With the slightly lifting horizontal stab and the semi-symmetrical wing section set at zero to the thrust line the balance point is just a bit further aft than is the normal practice, balance at about 33% of the wing chord. The lift of the tail keeps Miss Texas flying at a much slower speed than you would expect for such a large aircraft. Landings can be made by buzzing in for a hot main gear only landing, or the tail can be dropped and slowed down for a 'kiss the ground ever so lightly' three wheel landing.

When taking off, I taxi out to the runway, turn into the wind, and shove the throttle to high. She picks up her tail into a flying attitude in about three or four feet, tracks straight down the runway and lifts cleanly into the air with just a gentle bit of back pressure on the stick. I have made zoom take-offs, and stall landings, with no loss of control.

This is a big aircraft that will make you think that you're flying a small one. That is until you taxi up along side just about anything other than another Miss Texas or a Lazy Ace - then you'll know that you're flying one of the big ones. Try it, you'll like it. What else could a big beautiful gal be named, but Miss Texas?

As in past contraction articles about my larger than normal aircraft, I'd like to mention the code word 'adhesives', I use three different - nope, make that four different - types of glues when working on these larger models. I use the cyanoacrylics to tack pieces in place. or to laminate two sheets together. I use Titebond to glue most of the pieces, and to reinforce joints tacked by the super glues. Then, I use epoxy at the firewall, the dihedral brace, and the landing gear... "

Update 04/02/2016: Cleaned this plan up, just ran it through Photoshop and removed the worst of the spotting and noise, is all. 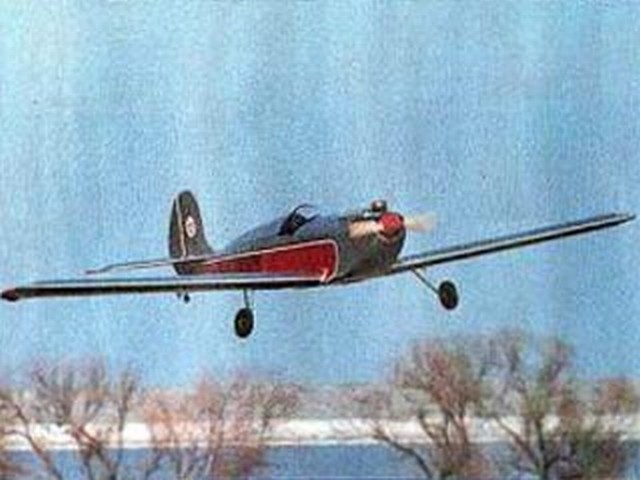