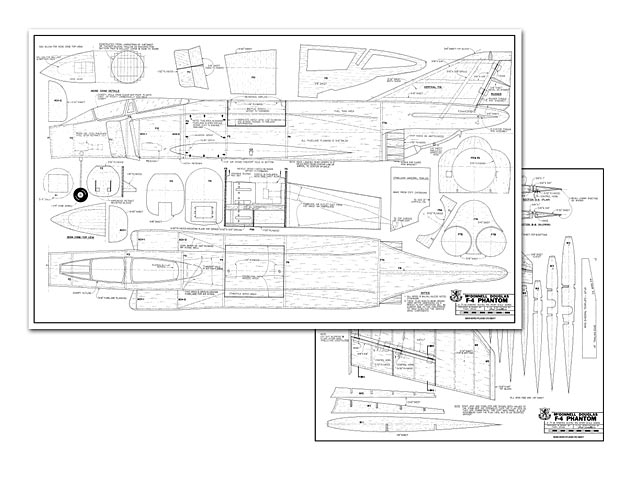 The F-4 Phantom has already been modeled several times, with either a pusher propeller or ducted fan unit being used for propulsion. I have built F-4 Phantoms using both of these power systems. In spite of that, I decided to build another Phantom as I consider it to be the most beautiful aircraft ever built. Another reason that induced me to build my latest Phantom is that the development of ducted fan units has shown great improvement since I built my first fan powered Phantom.

This model was originally designed for use with a Boss 602 ducted fan unit but I decided to use a Dynamax unit instead. This change was easy to accomplish. I used a Rossi .81 engine for power, although I think that an O.S. .77 would also be an ideal power choice; it retains all the good in-flight characteristics of its predecessors.

This aircraft flies fast and is capable of performing all the basic aerobatic maneuvers; it is equipped with wing flaps which I use to make shorter take-offs. My model is also fitted with a braking parachute that does slow the landing roll out a bit, but I actually use it more for scale realism and show, it also features another extra: rockets that are capable of being fired electrically. Eight rockets are carried and can be fired at one second intervals.

As can be seen by viewing the plan sheets, this version of the F-4 Phantom is intended for RC'ers who possess a fair amount of scratch building experience and are accomplished pilots. The plan sheets and written text do not cover every detail and construction technique; however, the assembly process is quite conventional and well within the capabilities of any modeler who has built a few aircraft from plans only.

Construction. We will begin with the ducted fan unit. Screw the fan unit to the 5/8 square hardwood mounting beams. These mounting beams are now epoxied between formers F5 and F6. The 1/32 plywood (F9) floor is now glued in place. Install half former F5A between formers F5 and F6 as shown. Fabricate the 1/32 plywood air exhaust. pipe and install it from the fan unit to former F6. The top half of the air exhaust pipe is made from 1/32 plywood strips (see photo). Cut the F7B formers from 3/16 balsa sheet. Place a 3/8 balsa strip between them and roll the 1/16 balsa sheet exhaust pipes from former F6 to formers F7B (see photo).

Next is the fuselage sheeting. My advice is to use a fuselage building jig. Cement former F7A to the end of the exhaust pipes and farmers F7B and install the 3/8 sheet F8 part. Begin planking the fuselage, starting at the top and bottom, and gradually enclosing the entire unit. Cement the F3 and F4 formers in place, followed by formers F1 and F2. Install the retractable nose gear mounting blocks and plywood side braces on former F2. Now install the front fuselage planking between formers F4 and F1. On the bottom, extend the planking as far as the F7B formers.

Carve and shape the balsa nose cone to the indicated contour and cement it to former F1. Sand the entire front of the fuselage to a smooth contour. Install the F10 3/32 balsa sheet pieces to the fuselage sides and onto them, formers ACH-1 and ACH-2, which are of 3/32 balsa sheet also (see photos). Install the fuel tank in the area above the exhaust pipe. Drill the necessary holes in former F6 for the fuel line tubing and pull the tubing through to where the engine/fan unit is situated. The remainder of the fuselage top planking can now be installed.

The wings are assembled next. They are primarily of balsa construction and the fabrication process is quite basic and straightforward. All wing ribs are cut from 1/8 balsa sheet and parts W10 and W11 are of 3/16 balsa sheet. Both wing panels are assembled over the plan sheet. The left wing panel is constructed bottom side up over the right wing panel view which is shown on the plan sheet.

Note: By spraying the wing plan with a light oil, it can be reversed and the markings still seen clearly. This will allow you to use the same drawing for the left wing panel, The wing ribs are glued to the main spars and the spruce spar caps are glued in place. Cement the trailing edge portions of the 3/32 balsa wing sheeting in place. Be sure to bevel the trailing edge of the bottom sheeting before installing the top sheeting. Glue the 3/16 balsa sub leading edge pieces in place. Install the plywood retract mounting plates, control cables, etc., and then partially sheet the forward portion of the wing panel.

The Phantom is assembled with a fixed non-removable wing. Note: The outer wing panels are not added until after the main airframe is completed. At that time, use the dihedral gauge to set the tip panels at the proper dihedral angle of 10 degrees. At this point, the holes are cut into the fuselage sides to accept the wing panel spars, which are epoxied to formers F5 and F6. Before the epoxy cures, be certain that the incidence angle of the wing panels is correct and that they are perpendicular to the fuselage axis.

When the epoxy has fully cured, install the remainder of the wing sheeting, the 3/8 balsa leading edges, and the balsa wing tip blocks. Sand the wing panels to the proper airfoil. The holes are now cut in the fuselage bottom for the retractable nose gear unit and the engine air intake 'cheater' hole. Cut the main retractable landing gear holes in the bottom of both wing panels. Install the retractable landing gear units, which will allow the model to be more easily supported while working on it..." 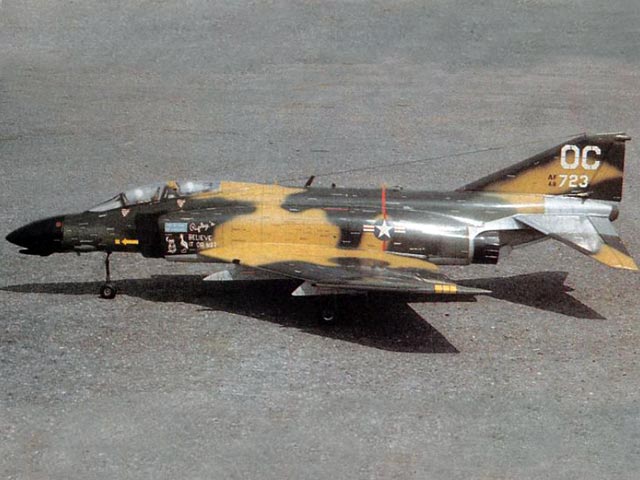 The recently added article appears to be for a different model. It is for a .61 powered prop model and the model on this page is a ducted fan design.
Tony Frackowiak - 01/05/2021
Hi Outerzone team, I think you mixed up two completely different versions of Pavel Bosak‘s wonderful F-4 Phantom II. The plan, the fist article, and the first picture (the US Army F-4) represents Pavel‘s nearly scale masterpiece, the IC DF F-4 Phantom II. For this version I can contribute another old article with some nice photographs. I will send it later to you when I have re-found it on my HDD….
The second article (RCMW) and the two photographs displaying the US Navy version is a completely different RC plane: it is the sport scale propjet (tractor prop) version of this jet by Pavel Bosak. The plan for this version is missing on Outerzone. There exists a building threat for this prop version on rcuniverse: https://www.rcuniverse.com/forum/scratch-building-aircraft-design-3d-cad-174/5193889-f-4c-phantom-pavel-bosak.html
Thomas - 09/09/2021
Thanks Thomas, you are right. 2 different plans. Ok, I think the simplest thing is just to leave the RCMW article where it is here, for now, I mean I don't want to delete it and thus make it unavailable - and currently we have nowhere else to put it :) When we get hold of the other plan, we can shuffle these files around onto the correct pages.
SteveWMD - 09/09/2021
Add a comment