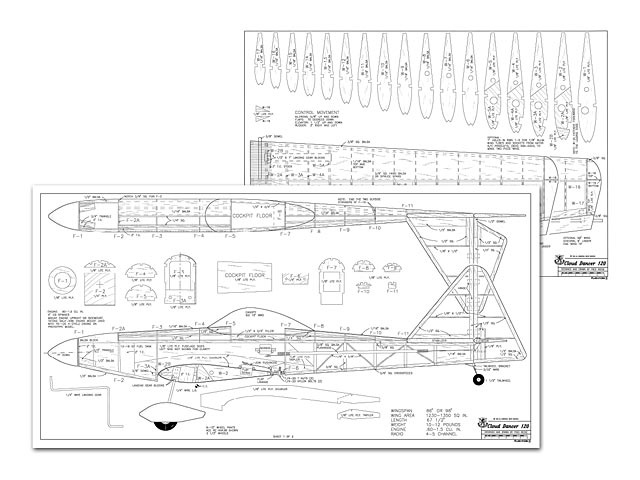 Quote: "Like its smaller brothers, the Cloud Dancer 120 builds quickly and is an outstanding flying airplane.

The Cloud Dancer 120 is a different type of aircraft. Think of it as a Senior Telemaster that looks and flies like a P-51. The wingspan is 98 in, the size of a Reno Racer or TOC aerobatic model but it only weighs eleven pounds with a YS-120 4-stroke engine.

The Cloud Dancer 120 is a scaled up version of my 74 inch Cloud Dancer (oz6512) published in the June 93 issue of RCM which was the best all-around flying airplane I have ever owned. The Cloud Dancer 120 is a fully aerobatic aircraft that is very light, and is powered with a 120 4-stroke engine with a wing loading of only 18.5 oz/sq ft. It flies like a feather with a rocket engine. The Cloud Dancer 120 can hover in a stiff breeze or it can zip around like a sport racer. Those who have flown the big Cloud Dancer flew it at reduced power most of the time. I guess the charm of the model is its ability to fly slowly and gracefully while having the power to go straight up.

To give you an idea of the performance of this big model, let me review its first few flights. The first flight was in dead calm and the idle was set too high. The take-off was easy, a little rudder held it straight. followed by a brisk climb-out to a comfortable altitude. Two clicks of aileron leveled it off and no elevator trim was needed.

The flight responses were comfortable from the start and I quickly relaxed. The next few minutes were spent trying loops, rolls, knife-edge, eights. hammer-heads, and humpty bumps with no problems.

The landing, however, used the whole runway. I was used to waiting for the smaller original Cloud Dancer to finally settle in and land, and the big one is the same. l did not fly it again that day because I wanted to get the idle slower to make the landing easier. The next two flights were flown in the wind. We had a wind meter and it was registering a minumium of 17 knots, gusting 30..."

Update 20/03/2015: Replaced this plan with a clearer copy, thanks to Balsaworkbench. Scanning by Don at EAC, cleanup by theshadow. 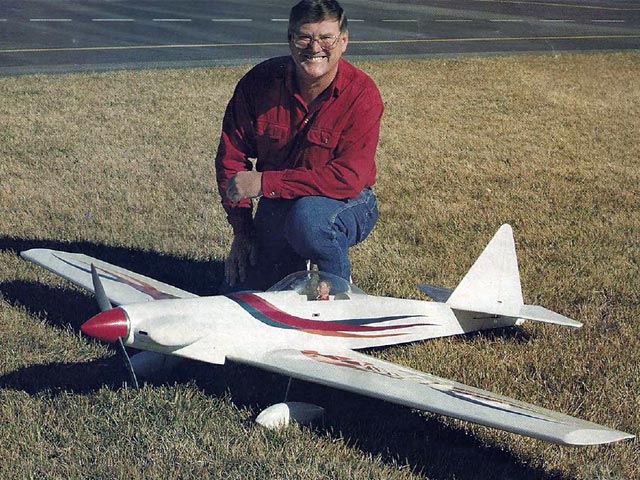 Hello Mary, I hope all is well with you. With this Kovid 19 thing going on. I've decided it was time to build another airplane. Friend of mine gave me a SAITO 120 4 stroke so that kinda led me to look for a 120 size, so I decided to go with the 98 inch wingspan and I went askew on the plan and made a lot of the parts out of 1/8 plywood aka a door shell. My friend Jamie has a laser cutter and a program so I sat down and redrew it a bit any burned out the parts for me [pics 006-009]. So use any and all photos if you like. Thank you for what you do! Regards,
Larry - 04/05/2020
Hello Mary hope all is well. So believe it or not, the stuff I build actually flies. Here's a few photos [010-012].
Larry - 10/06/2020
Hi Larry, it's not how she fles but how she lands and I see you master the all-terrain technique: one wheel on grass and the other on tarmac :-) Jokes apart, nice work on the ribs, the CD was designed for lightness and you found room to add more. Per your comments I see you're happy with your nice new ship, so here's a congratulatory pat on the back for you!
Miguel - 11/06/2020
Add a comment