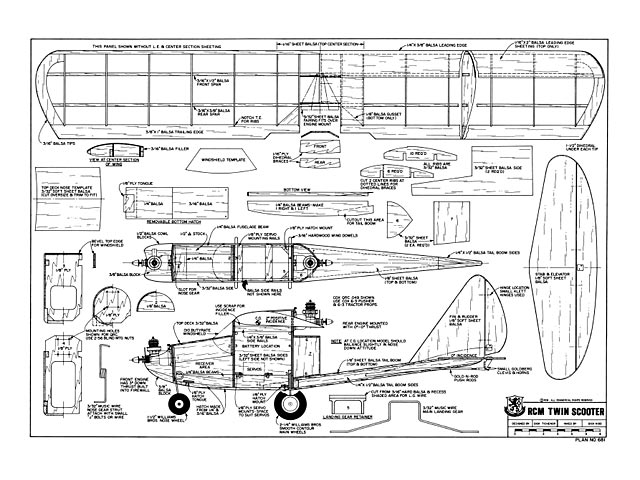 Quote: "One of the most popular airplanes ever presented by RCM, The Scooter (oz5978) reappears as a poor man's twin engine aircraft that is rich in enjoyment.

A one hour drive twice a day on Southern California's freeways provides too much time for day dreaming, Those day dreams get me in trouble because I'm continually dreaming up projects. The Twin Scooter is one of those projects. I am in the dog house with my Fearless Leader because I built it and didn't bother to shoot construction photos.

We ran a construction article on the RCM Scooter Mk .049 (oz5978) in our December 1975 issue. The plan sales for that design were one of the largest in RCM's history. For the original construction photos, I built one model to completion and partially completed a second. That second one is the source of my problems because I wondered how it would work if I mounted an engine in the nose, in addition to the pusher installation.

Changing the fuselage nose to accept an engine was a simple task. The only
other change was to add a 1/16 x 2 in balsa sheet to the upper leading edge of each wing panel. The sheeting was for extra strength that might be needed with the use of the second engine.

I used a pair of Cox .049 QRC engines that feature really effective silencers. This was a good choice as the noise level is very low while retaining the fascinating beat associated with multi-engined models. The push-pull arrangement eliminates the asymmetrical thrust problems of single engine opera-tion usually found in twins - in fact, it flies just about as well with either engine running as it does on both.

This little twin probably has well over a hundred flights on it. Dick Kidd and I wrung it out thoroughly in the beginning. Our soaring columnist, Al Kindrick, borrowed it and for six weekends he and his friends were continually refuelling and getting it back in the air. Many of the flights found people who had never flown before operating the transmitter and several of them are now into RC. While this speaks well of its gentleness, it is also very maneuverable.

Since I didn't photograph the construction sequence, I will make reference to the December 1975 issue of RCM. Except for the front engine, shape of the nose and wing leading edge sheet-ing, the construction is the same as the single engine machine. The drawings should be self-explanatory, but if addi-tional information is desired, the December 1975 issue can be ordered from RCM.

Fuselage assembly is started by gluing the 1/2 in triangular strips to the 1/4 in sheet beams. Next, assemble the beams, bulkheads and side rails. The 3/32 sheet sides are then added. The remaining structure is a series of simple cut-and-glue operations. A couple of words of caution - when attaching the tail boom, make sure the stabilizer mount surface is parallel to the fuselage bottom below the wing. Also, use an ample amount of white glue or epoxy to secure the landing gear retainer..." 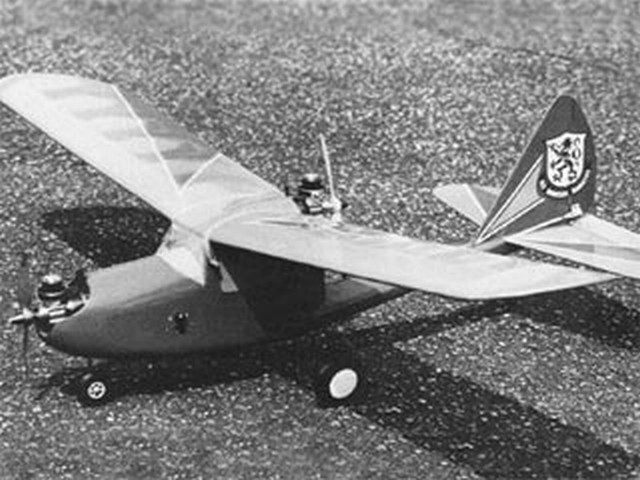