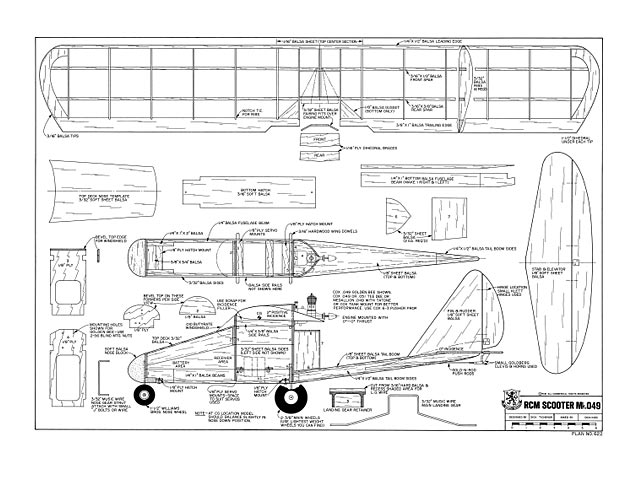 Quote: Looking For A Change Of Pace? This .049 Powered Sport Ship Will Fit The Bill.

Are you looking for a change of pace? Do you want a plane that doesn't look like all the others at your flying field? Would you like a bird that's economical to build and fly?

We did, and the Scooter Mk .049 is the result. There were other requirements, too. It should be simple and fast to build. The fuselage isn't built as quickly as a simple box job but then it doesn't look like a box. The construction photos show that it is easy, however.

Most important of all, it had to fly well. The first flights were powered with a Cox .049 Baby Bee and it flew pretty well, about the way it was intended. The test pilot was our picky Fearless Leader who believes in destructive testing before he endorses anything. The Scooter survived his wild gyrations but he handed me a Cox Medallion .049 and insisted that we try it his way. The front rotor mill does give it more pep and allows it to do more jazzy maneuvers while the Tatone tank mount provided about twice the duration of the Baby Bee tank.

When properly trimmed out the Scooter is very stable and will fly hands off - in fact, we got it into weird situations several times and it promptly straightened itself out. Carl Maas was kind enough to fly the Scooter for our photos. He's almost as mischievious as Dewey! He could fly it inverted for only a few seconds but he could do three snap rolls faster than you can snap your fingers three times. We giggled a lot when he performed the Lomchevak. To show us that it wasn't an accident, he did it several times.

As with any small airplane, keep the Scooter light, and use soft light weight balsa. Our Scooter is covered with Solarfilm - use your favorite covering material. Also, use the lightest weight wheels that you can find.

The Scooter should balance slightly nose down with your fingers under the front wing spar. There is plenty of room for the receiver and battery pack forward of the servos or you can install the receiver directly above the servos if that's what it takes for proper balance on your model.

We liked the RCM Scooter Mk .049 so well that we have almost finished an RCM Scooter Mk IV (oz5865) with a K&B front rotor .40. More about that later. Anyway, here's how we did it. 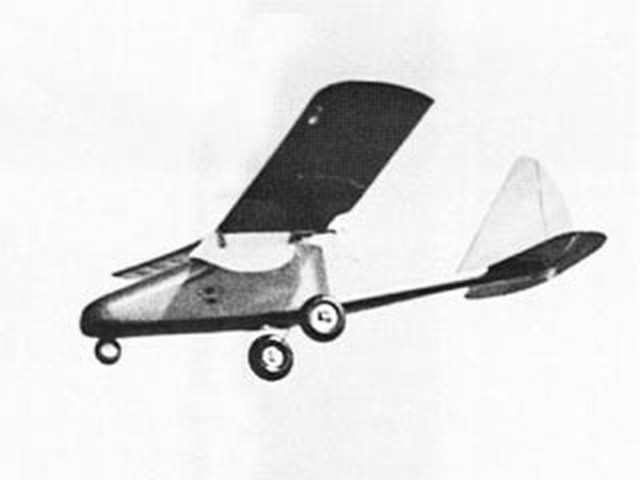