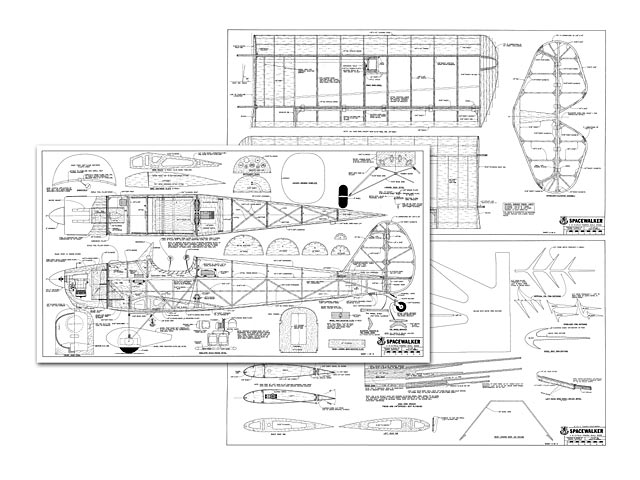 Quote: "Dennis Tapsfield was hooked on the Spacewalker the first time he saw a photo of it in Sport Aviation. His .61 powered model does all he had hoped for and is a real crowd pleaser.

Spacewalker is a new homebuilt aircraft designed by Jesse Anglin who formed Country Air Inc, in North Carolina. Being a member of the Experimental Aircraft Association, I receive their monthly magazine Sport Aviation, and it was in this magazine that I first saw a picture of Spacewalker when it made its debut at Oshkosh in 1986. It really attracted me and I thought that with its striking color scheme, it made the aircraft a perfect subject for a super model. A number of letters, plus a telephone call, were necessary to get the information, but I finally had all that was required to make a start; this was in Sept-Oct '87.

All models fly better if they are lighter (within reason of course). Remember gliders have about 9-12 oz/sq ft, so we are not really looking at a paper bag, just a lightly loaded scale model that will fly at a realistic speed and be adequately powered with any sport 61. I powered mine with a Merco 61, a real favorite of mine for many years.

This model handles well and is a great crowd pleaser. If you are interested, here's how to build it.

Contruction. Wing: The wing is quite conventional, so start by cutting all the ribs as shown. Take note that the main spar position on the left wing is 1/4 in farther forward than the right, so that they will overlap in the center. Build each wing panel over the drawing in the usual way, ignoring the ailerons at this point; just build the complete wing. When the spars are in, roll the wing onto the lower trailing edge, and glue the ribs in position.

When set, add the top portion of the trailing edge. With the leading edge in place, the structure is reasonably integral, so remove it from the plan, and then add webbing between the top and bottom leading edge spars. The final installation is the 1/16 in leading edge sheeting..." 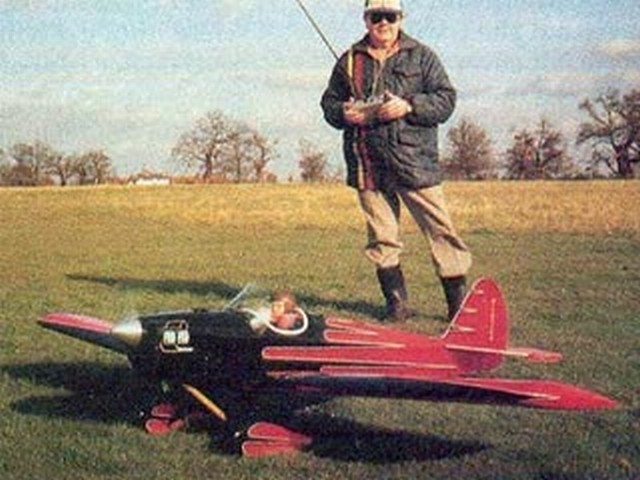