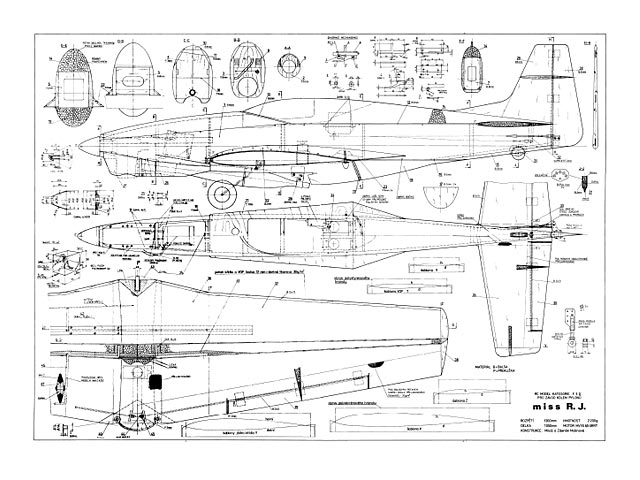 Miss RJ. F3D R/C pylon racer. Hi Steve, here is Malina brothers Miss R.J. on left side there is a double image but original is like that.

Quote: "We are privileged to present the model which won the first RC Pylon Racing FAI World Championships in 1985 - designed, built, and flown by two Czechoslovakian brothers. Miss RJ, by Zdenek and Milos Malina.

OUR SUCCESSFUL participation in the World Championship F3D FAI Pylon Races last August in Chicopee, MA was a long journey with a happy ending for us. But we hope that this is not the end of our aeromodeling days. We want to continue racing and hope we can visit the USA again.

We spent 20 unforgettable days with our American friends, and we would like to take this opportunity to thank all who made our stay in the US possible and so enjoyable. Everywhere the people were so friendly; it was as if we had known them all our lives. It was simply fantastic, and we have many happy memories to cherish. Saying goodbye when it was all over was hard to do and very moving.

Model Aviation magazine offered us this chance to write about ourselves, our modeling background, our preparations - anything to do with Pylon Racing. It is not very easy to write about oneself. If you've ever tried it, you'll understand; but here is our story.

Our interest in modeling goes back to when Zdenek was 15. We had both always been interested in engines and technical matters, and we chose F1C Free Flight Power as our entry into modeling. Milos soon lost interest in the event though, and this left Zdenek on his own. He began taking part in many contests and traveled a great deal both home and abroad, fortunately winning quite often. In 1966 he became the European F1C Champion; these were very successful years for him. Milos, meanwhile, was active in electronics, but this would eventually bring him back to aeromodeling.

In 1974 Milos was lucky enough to get a Graupner RC set, and that was it. Initially he decided to fly in the F3A RC Pattern category. But after several contests, he decided that this, too, was not the event for him. The question arose: What should we do next?

I can't remember whose idea it was to try Pylon Racing. All we knew about it was that it existed in the US and had been popular there for a number of years. After some research we discovered that Pylon Races were being run in Europe as well, particularly in Sweden, West Germany, Great Britain, and even Hungary.

We obtained plans of the then very successful American model Bob Cat (oz10465) from Bob Violet. We installed the Czechoslovakian MVVS 6.5/F engine, intended mainly for use in F 3A Pattern. At that time it was one of the best engines of its category, but we were not satisfied with our racing times of about 2:30, as times of under two minutes were common elsewhere in Europe. Undaunted, we continued to practice. By the end of 1975, we flew our best time-2:15. We felt this was due mostly to improved piloting skills, but it still was not good enough.

A lengthy period of research, technical information exchanges with our fellow Czechoslovakian Pylon Racers, and still more practice followed. Several years passed, and as our combined knowledge and skills increased, our racing times also improved. In the early 1980s, it was becoming apparent that the Czechoslovakian FAI Pylon Racing teams were a group to be taken seriously. In 1983 all of our efforts were rewarded when we won the prestigious Trofeo OPS race in Italy with a fast time of 1:25. Two weeks later, at the Grand Prix Modela race, we were fortunate to win again, this time over 80 of the best Pylon Racing teams in Europe.

At the end of 1984, we learned that the first World Championship for F3D would take place in the cradle of Pylon Racing, the USA. We immediately awoke from the lethargy that had slowly creeped over us in the past months. At last, here was a chance to encounter the best fliers of the world. Secretly, we hoped that the whole Czechoslovakian national team would go to the US..." 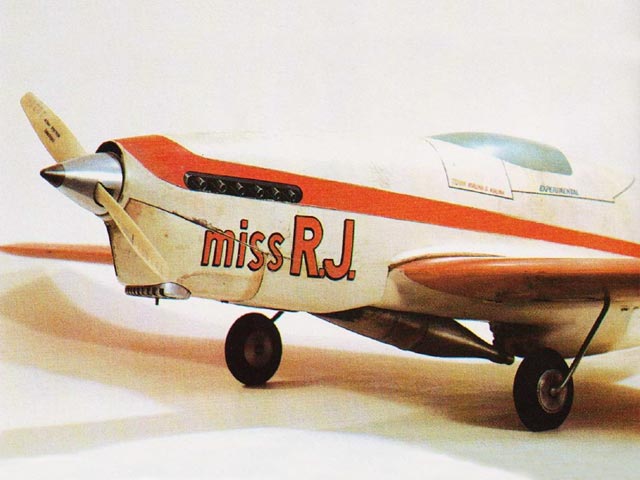