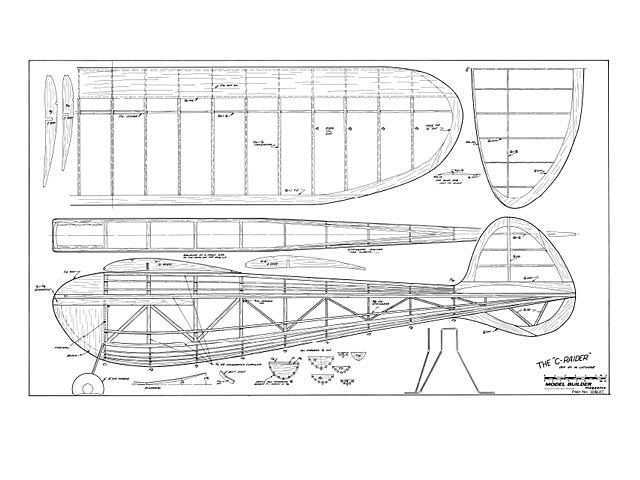 Flew to first place in Class C Junior at the 1940 Eastern States Contest. Firstpblished in MAN April 1942. This here is a later redrawn copy in MB 1986.

We went all the way into April of 1942 for this one, but it's SAM legal, as it designer, M La Torre, flew it to First Place in Class C Junior at the 1940 Eastern States Contest. It certainly shows strong Maurice Shoenbrun influence, having lines similar to his Gladiator (oz4) and in fact, Maurice drew the original plans for La Torres design, called the 'C-Raider'. You could call it a simplified Gladiator. Both modelers were members of the famed Sky-Scrappers Club.

The construction is pretty much standard to any moderately-experienced builder of traditional gas model aircraft. One suggestion - the instructions say that a basic fuselage box is built first, with the top longeron being that which is closest to the thrust line, After this, the 'cabin' is added to the top, and the bulkheads and stringers are added to the bottom. For better fuselage integrity, we'd suggest build-ing each side complete with all three longerons (Note the built-in hardwood bearers for the motor mounts). The uppermost 'cabin' longeron is joined to the main fuselage with verticals at Stations 1, 2, 3, and 4, with the remainder of this longeron sort of 'hanging loose'. Next, join the sides with cross-pieces glued lo the thrust-line and bottom longenrons, including the tapering and joining of these longerons at the extreme tail end. Now install former F-10. At this point the top cabin longerons can be pulled together and joined at F-14 followed by adding the sloping verticals at stations 5 through 8. After this, the remaining bulkheads and stringers can be added in normal fashion.

It is also noted that somethg has to be done about resting a V-dihedral wing center-section on a flat fuselage top. If you're going to leave the top of the fuselage cabin open, the first four crosspieces can be lowered enough to clear the 'V'. Otherwise, cut V-shaped crosspieces and notch each one to receive the top center stringer which can now be extended to station 1. Third option is to add 1/4-square rails to the top longerons to form a wing saddle.

Flight trimming, according to the artide in the April 1942 issue of MAN, calls for balancing at 50 percent of the wing chord, a large right-hand glide circle, and a fairly tight power turn to the left." 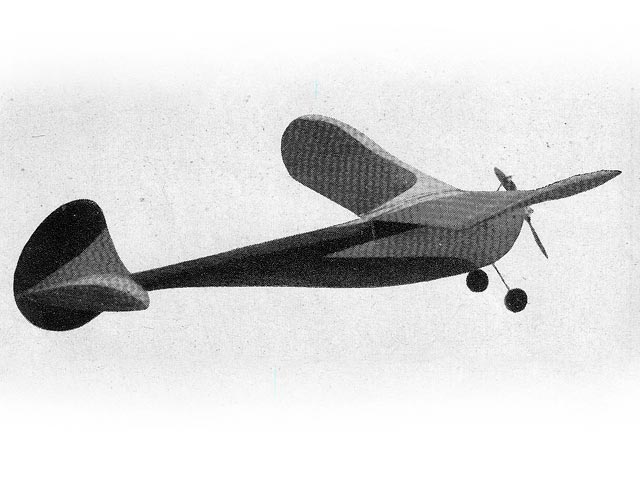