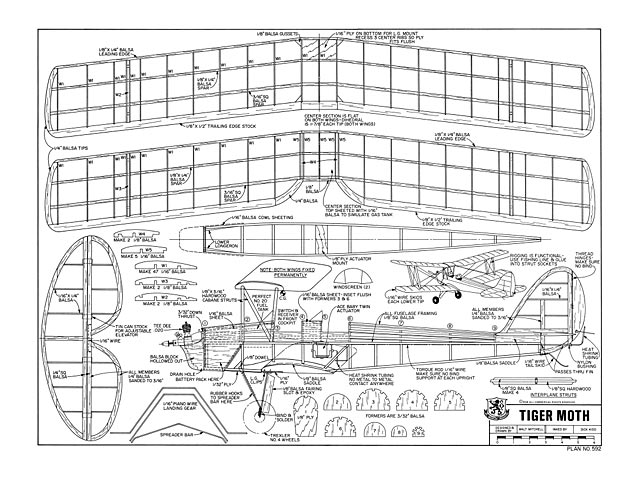 Tiger Moth it is, and she is queen of all the moths. This sweet handling airplane gave the British wings and trained the Spitfire and Hurricane pilots who defended Britain in her finest hour in WWII. The ubiquitous Moth became so popular in old Blighty that people began to call all light planes 'Moths'. The prototype seems to have ha ablue fuselage with clear doped, muslin covered wings and tail. The standard color for later models came to be silver, much as yellow became the color of the Puper Cub in this country.

The Schoolyard Moth is not scale, but could be made so with a little attention to detail. Scale nuts should see 'The Great Planes' published by Grosset and Dunlap, an ecellent tome on all the old favourites with good pics of the Tiger Moth and other Moth variations.

My drawings are from the Tern Aero Tiger Moth (oz29) design, scaled up with modifications for Ace R/C equipment. Covered with silk and carrying about eight coats of clear dope, the airplane weighs in at 3/4 pound all up.

The plans should be self-explanatory. Note that the flying wires, which are fishing line, are functional and glue into the interplane and cabane strut sockets. Both wings are glued on permanently, avoiding the usual bird-cage hassle of a biplane. Access to R/C gear is through the cockpits. The prototype carries a reserve Perfect #20 gas tank as well as the tank attached to the Tee Dee. The larger tank will serve you best, once you have the Moth trimmed out to your satisfaction.

Trimming is mort important. Hinged with light tin strips, the elevator is adjustable - but not in flight. You will be tempted to push forward or pul back on the Ace transmitter stick, but forget it. This airplane has to fly of its own accord..."

Hi Steve - Here is Walt Mitchell's Tiger Moth from RCM magazine issue 03-75. This model was featured on the magazine cover as shown.

Note there is also a later RCM plan (variant) based on this plan, but modified to use electric power with Speed 400 motor, see Tiger Moth (oz7492).

Original article pages, text and pics, thanks to theshadow. 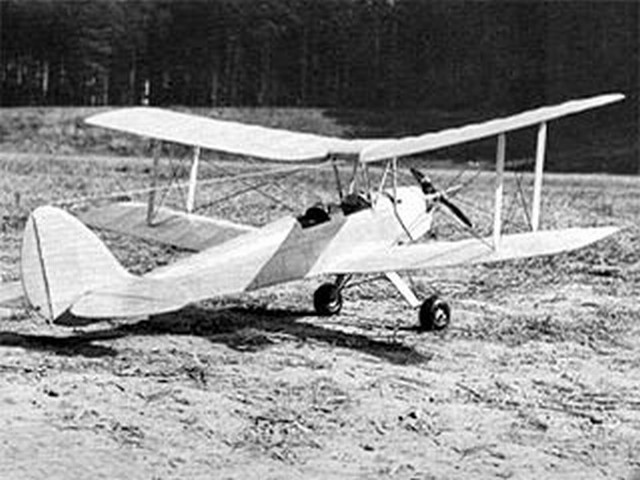