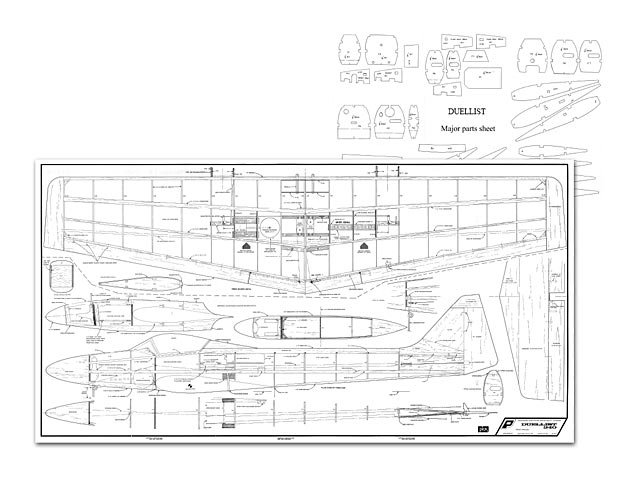 Quote: "I've been looking for the Pica Duellist 240 for some time now. I finally found someone with a clean set. These were scanned from originals. You have the Duellist MkII (oz5632) on your site, however the original Duellist 240 plans in the kits pre-date the MkII and are slightly different. The tail shape is different and the wing is a little shorter."

Update 05/10/2014: Added an alternate scanned version of the Pica Duellist plan, thanks to Min Min Man. Curiously, the main difference between the two plans (both Pica) is the credit for the name of the designer. So. This one (no date) shows Dave Platt as the designer, and was submitted by Min Min Man. Includes traced printwood parts on sheet 2.

The Duellist 2/40 is a sport twin aircraft manufactured by Pica Products, 2657 NE 188 St, Miami, Fla 33180. It is an impressive looking kit; the balsa is top notch and a pleasure to work with. The builder's impression upon opening the box is that a lot of thought went into the packaging and manufacturing of the kit. Die-cutting was excellent, and the assorted hardware relatively complete. The photo on the box inspires the builder to wisk the kit to the building room and begin immediately.

Construction: Pica supplies the builder with a building booklet of twenty pages consisting mostly of exploded views and step by step instructions. If the building sequence is followed, one finds that the kit goes together rather matter of factly. Being a totally built-up balsa ship, the plane takes a little longer than usual to put together, versus the foam/sheet planes that seem to becoming more prevalent on the market.

The wing was started first because it seemed the most complex part of the kit. The die-cut ribs fall out of their sheets and the building is done by shimming up the trailing edge of the wing, placing the spars in place, and sheeting. Upon completion of the sheeting, the nacells are fabricated and placed on the wing. Extreme care must be excercised when aligning these nacells for the thrust angles are most important. In this wing planform, the leading edge is straight and alignment procedure is to use triangles to establish the proper thrust angles.

Fuselage construction is a wonder to experience. One cannot believe that such a large fuselage can be so very light. It is so light that you have to wonder if it is indeed strong enough. Flight performance will bear out the fact that it is indeed very capable of handling the ship.

Covering: The whole ship was covered with K&B 3/4 oz cloth and resined. K&B paints were the final touch to this project. I prefer K&B resin, due to the wonderful property of not balling up on the sandpaper.

Engines: I opted to use two SuperTigre .40 engines with their mufflers. Due to the fact that we fly off a sod field, prop clearance was a problem to contend with. The SuperTigre .40's were outfitted with 9/7 Zinger props. Fueled up, engines tached, the Heath tach read about 11,400. This was after backing off a quarter turn.

Radio: There was ample room for the radio. My Kraft seven channel fit with room to spare. The servos were Kraft 15-2 and 14-2.

Flying: With the radio checked for range and control surfaces re-checked, I was ready to initiate the flight. I felt apprehensive due to the fact that a lot of building time had gone into this ship and it was my first twin. I slowly advanced the throttles and the ship advanced rather slowly due to the fact that the turf was rather high. However, after a run of about 100 ft the ship lifted-off. Apparently, all the time spent in alignment paid off, for no trim was required for any surface. Pica does a good job of leading the builder through these critical steps.

Once airborne, the Rhom retracts were pulled up and the flight continued beautifully. I really put the ship through its paces - a series of rolls, loops, spins, low passes (gads how I love those passes with the engines purring away in harmony), stall turns, wing-overs, etc. The ship responded predictably. If there was one area of criticsim, I would have to say that the elevator is very sensitive. This does not make the model harder to fly, one just has to get used to this characteristic. Each and every maneovre is smooth. The graceful lines and smooth flying couple togetrher to really wow the bystanders."

Alternate version of the same plan. This one (dated 1990) shows Morten Tanger as the designer, and was submitted by Rocko. Includes parts ID sheet from the manual, scaled up to full size.
Manual (20 pages complete, includes detailed illustrations).
Reviews. 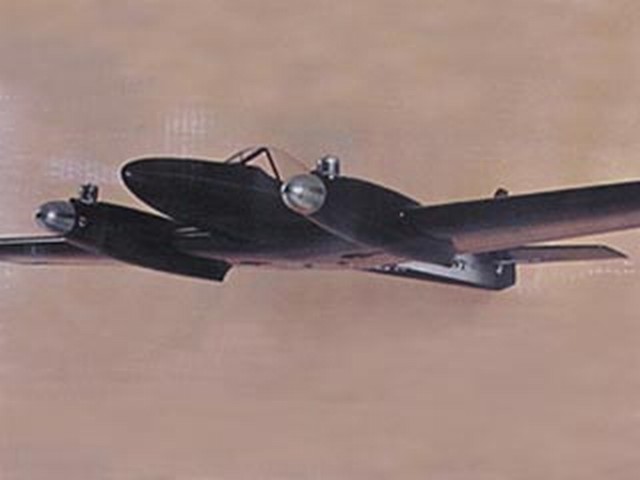 I flew one of these back in the day, built by Bill Norman from the kit. Bill always thought that waaaaay too much power was almost enough, so he powered his model with two K&B 45 rear exhaust ducted fan engines with short tuned pipes. It went ballistic when they were running right, but they were the most temperamental engines I ever saw, I don't think they were meant to pull any normal size prop. Bill finally gave up on the K&B's and replaced them with O.S. 40's with rear exhaust. They didn't have as much power as the K&B's but at least they ran well, too well eventually. Bill made a wide open pass down the runway and the elevator fluttered off right in front of us, but it continued to fly and even had a slight climb. Much to our surprise, it flew well enough to make a fast belly landing in the grass without damage. Added balance weights cured the flutter problem and it flew again the next week. It was stable enough to fly well on just one engine, which it did many times with the original K&B's.
DougSmith - 04/08/2015
I'm thinking about building this plane and curious if two 61 Magnum four strokes would be too much for this? Thank you for your time
Christopher - 21/04/2019
Add a comment