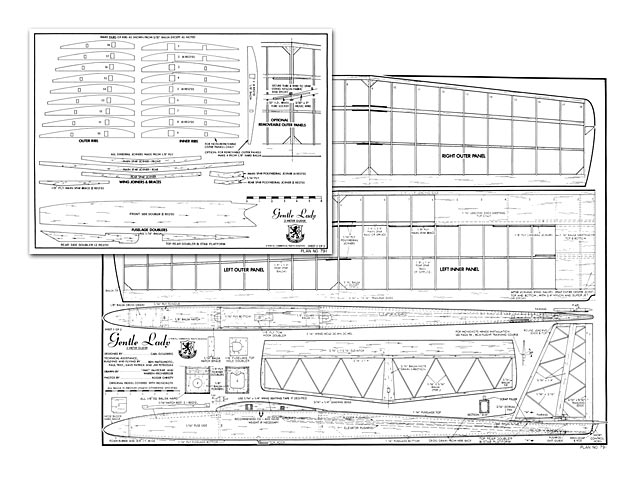 Quote: "As a novice glider pilot. Carl wanted a two meter ship that was respectably efficient, and, if possible, competition worthy. RCM feels the Gentle Lady meets that criteria - Like most people who like airplanes, I've always been drawn to sailplanes. They are the most beautiful of man made birds. Their sleek lines, high aspect ratio wings, utter cleanliness, and refinement ot detail make them the ultimate 'clean machine.' At the Toledo Weak Signals show each year, I have to stop, study, and admire the very appealing sailplanes that are always on view.

Naturally enough, when thinking of designing one myself, I studied some of the better known ships around. Among them were the Pierce Arrow (oz6214), Wanderer (oz4100), Soar Birdi (oz10400), Drifter II (oz572), and others. One of these was a fine US East Coast design by Woody Blanchard, which has done well there. In addition, I spent many hours talking to glider flyers, reading magazine articles, newsletter reports, etc. There was a lot to learn.

Totalling things out, this is the design philosophy that emerged. First of all. I decided I wanted a two meter ship. The essential reason for this was a desire for simplicity. Getting into one of the larger birds, I felt, would tend to draw me into complications. They just naturally tend to be a little more sophisticated. Also. I had noticed growing general interest in the two-meter class. Interestingly, I later learned that the Dassel, the Austrian design that has aroused such great interest world wide, and which was used by the new world champion. Anton Wackerle, has only about 6in more span.

Besides simplicity, I wanted the ship to be easy to fly, and stable. Obviously, as a novice glider pilot, I didn't want to shoot for more efficiency through means that might require some real flight skills.

At the same time, I definitely wanted a ship that was respectably efficient, and, if possible, competition worthy. One major means of achieving the efficiency sought, based on past experience, was to use a thin airfoil, and build it with a smooth top. The lift-drag ratios of such airfoils tend to be quite high, and it turns out the Gentle Lady can really 'cruise' when desired.

Further, in addition to keeping the model lightweight, I felt it desirable to have generous wing area to reduce the wing loading, and help pull up the weight of the tow line, whether hi-start or winch. Despite having what appears to be a large chord, the aspect ratio comes out at 9.3, which compares not too badly with the Dassel at 10.6. In addition, the stabilizer does provide a slight amount of lift, not just drag. This is proven by the location of the Center of Gravity, which is around 40% back.

Lastly, I wanted no projecting wing dowels, or rubber bands crossing over the centre of the wing, After all, why disturb the airflow? When you get right down to it, a glider has no means, such as an engine, to make up for a lack of efficiency. All it has to help it stay up is cleanliness. The dirtier it is, the quicker it will come down..."

Update: added review from Spanish magazine, RCModel (No. 160/1994), thanks to alcalaino. 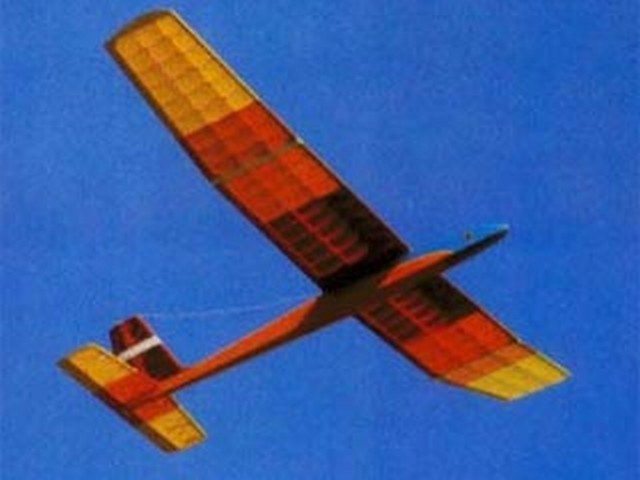 Hi, Mary and Steve. I found a review for the trainer glider Gentle Lady in the Spanish magazine RC Model, issue no. 160 from 1994. So I have scanned it to add as a supplementary file to either plan ID oz2359 or oz5961, or both. I send a couple of pics, too [more pics 003, 004]. The headline of the article reads: "Gentle Lady. A beginner's RC glider USA style".
alcalaino - 24/08/2016
I've just added it to this version of the Gentle Lady for now. For anyone interested in the other one too, it's here: oz2359.
Mary - 24/08/2016
Hello friends: some photos of the Gentle Lady [more pics 005-007]. I have lost three in thermal. I still have a kit to assemble and my son has another almost finished. When the spring allows us to leave to fly them, we will send more photos.
AntonioRG - 16/01/2017
If a Gentle Lady fuselage isn't covered with Monokote or something like it, it may be vulnerable to splitting. It's probably a good idea to wrap with bands of light fiberglass cloth at intervals, or silk and dope, or cross pieces glued inside. I learned this the hard way. I ended up wrapping it with thread at intervals, but that's a bit ugly.
LincolnR - 22/12/2017
Pic of my Gentle Lady [008].
HenryH - 25/03/2020
I did not receive a building instructions for my Gentle Lady Short Kit. Would you please send one to me; a photocopy would be fine and it would immensely help me learn to build one of these kits. Thank you for any help you can give.
Bill Eckles - 08/12/2021
Hi Bill. That's not how Outerzone works. See the FAQ. Then see Gentle Lady (oz2359) for the Goldberg kit plan and instructions, as downloads.
SteveWMD - 08/12/2021
Add a comment