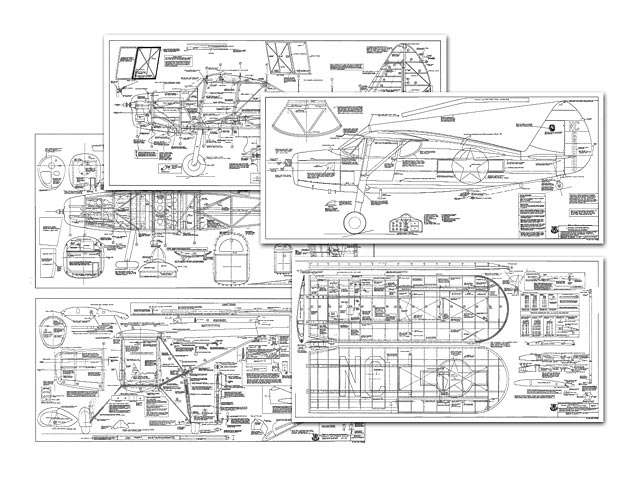 Quote: "One of the finest aircraft construction articles ever presented by RCM. Robert Lopshire's Fairchild F-24-H is an .80 powered stand-off scale model that you won't be able to resist.

Carl and I had agreed that to build and fly a true scale ship for fun would be something akin to rolling a marble down the center stripe of 42nd Street in New York at rush hour, pushing it with your nose. In that moment of truth, coupled with a desire to build something that looked like a real plane and flew like one, the 'Innovator's Class' idea was born. The longer I sat at my drawing board, the more the idea became valid - and the Fairchild began to get redesigned in a number of places.

First place of changing the factory scheme came when I took a look at the top view of the original. Looked like a pregnant guppy. A bit of a shock to the design senses since the Fairchild had always looked so slim and sleek in photos. The scaled-up fuselage width of 10-1/2 in was chopped down to 8-1/2 in. After all, esthetics had to be considered here, and besides, no people were going to sit in the silly thing anyway. So the seating became a tad squashed, who cared?

The next major change was to get rid of the original idea of welding a mounting up from the axle to fit the main oleo onto so it would exit the wheel pant at the scale position. Most modeler's don't have welding outfits, nor do they work with materials readily weldable in the
small scale worked with. I went for a more direct approach of mounting the oleos; I used portions of two hinges made by the Stanley Company. I could have used longer versions of the hinges to obtain a scale effect, but my personal opinion was that they would have been a bit flakey for strength, and besides, I wasn't after scale so much as I was after a realistic looking plane. I opted for the short hinges. Only a Fairchild fanatic, or a scale judge armed with plans would know the difference in the finished product.

Another design feature bothered me - a portion of the color scheme that Fairchild put on the original ships. This concerned the area around the cabin. Fairchild had all this painted the same color as the large trim panel, and the result was that it all pretty well blended in with the dark cabin. As an artist, I took the liberty of changing all this by using white around the cabin and windshield to set these parts out. As inventor of my own little contest, I'm allowed.

In actuality, although I departed from scale. I stuck closer to it than I would see for those who might become interested in an Innovator's Class, where one would be free to mix airplanes to obtain a final result. My approach was fairly mundane, much more the way a kit maker might approach a project, but I did discover some things along the way that hadn't, to my knowledge, been used before.

The original plans for the ship were made by working from all the three-views obtained. All that was needed for what I had in mind when setting out to design the ship, and what I foresee as the way for the group who might get interested in my proposal for the In-
novator's Class. However, I did take the time to trot to a local airfield and make a few dozen shots of a full scale Fairchild F24HR - which proved the plans that I'd been working with were absolute liars.

Not shown on any of the American plans was an item at the rear of the fuselage that I've dubbed, for lack of any mention anywhere, a 'fishtail'. This gizmo flares out to fill the gap between the elevator sections and carries the rudder cables. Funny thing here was that only an English plan sheet showed the thing until I saw the real ship. Since I'd planned cable controls to the rudder, the sight of how it all worked solved a number of design problems at this end of the fuse. The American plans showed a metal tail wheel housing. Not so on the real McCoy. The item is a canvas boot fitted over heavy curved rods. top and bottom - a snap to duplicate with Indian Head cloth stitched over soft wire frames. To keep these fuelproof, I coated the finished product with polyurethane varnish. Not to be 'scaley', but to add a touch of realism.

The flaps on the full scale ship show a three point mounting which wasn't in keeping with the materials we work with. Fine with steel and aircraft bolts, but not with plywood and funny little hinge methods. I changed the hinging to four from three and, while making the hinges somewhat realistic, I shot for strength and reality of function, rather than true scale. More on the hinges later.

On the original Fairchilds with Ranger engines, the exhaust stacks, two of them, protruded from a slot on the right side of the engine cowling at the very bottom. Modelers don't have many op-tions where engines are concerned..." 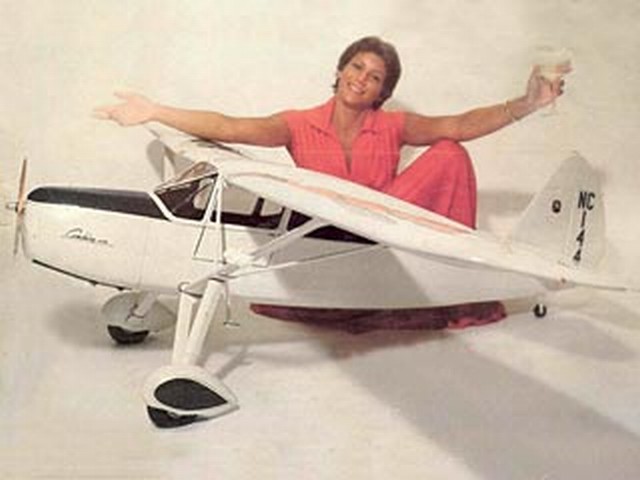