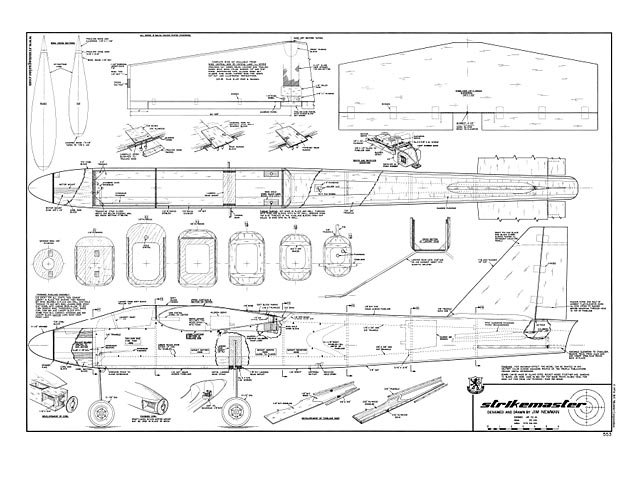 Quote: "Over the years a number of model plane designs were evolved only because some R/C equipment required testing and probably the most well known model to be born this way was the Ugly Stik (oz5175). Strikemaster came about in more or less the same way because, after years of using highly unreliable home built equipment, I finally received a big break and found that I was able to afford my first real R/C gear - a brand new Series 70 Kraft six channel, so it was natural that I should want to get it into the air in the shortest possible time.

I could have built an Ugly Stik, I suppose, but as a good Chicago Scalemaster, I felt that my creation should have at least some likeness to a full size aircraft and my original lunch time sketches bore resemblances to the Anglo-French Jaguar, BAC TSR 2 and the BAC Lightning, all of which I had been intimately connected with back in the old country. In fact, the model presented here in its Mark Three version, bears psuedo 56 Squadron RAF markings, stolen from a Lightning of that illustrious and historic squadron.

I can honestly recount that the Strikemaster has been more than forgiving, the low wing loading and that generous leading edge radius taking care of me on many occasions. The model's characteristics are that it should have enough performance to satisfy the 'almost expert' and yet it will fly slow and docile enough to make it a good transition model for any RC'er trying multi for the first time. Mehlin Smith (responsible for the first ever Goldberg Shoestring (oz1923) you may recall) can really show off its low speed handling by flying it low and slow, dragging it in now high just above the weeds to finally rib my nose in it by dumping it on its elevator right at my feet! Another party piece is to hover into the wind with the stick way back, throttle closed, using rudder only to maintain heading and finally sinking right into the field.

Little need be said about the construction since it is very basic with its all sheet fuselage, but a couple of notes on the order of things will be an Assistance I'm sure.

Construction. Assemble the wing first - a straightforward 1/16 balsa sheeting job over a foam core. I used Southern's Sorghum to attach the skins and have found it satisfactory. Five Minute epoxy holds the tips, leading and trailing edges in place.

Next, assemble the fuselage sides remembering, of course, to make a RIGHT and a LEFT. I did find it a distinct advantage to use 3M77 spray contact adhesive when laminating the sides to the balsa and plywood doub lers but I also took care to mask off other areas where conventional glues would be used. The sides are erected over the plan with F1, 2, and 3 epoxied in place and once they have set and are squared up, you can add the remaining fortners and the rear wing hold-down blocks..."

Just the name 'Strikemaster' might imply to the average flier a fast, semi-scale, somewhat hairy ship for more advanced builders. In this case, however, the name has nothing to do with the product's qualities, since this airplane is probably one of the most docile, forgiving ships I've ever flown. Yes, it looks like a jet, but it handles like a Cub.

The Strikemaster is a balsa and foam kit manufactured by Midwest Pr-ducts Co, 400 South Indiana St, Hobart, IN 46342. If you believe in box covers, you may power it with anything from a .19 to a .45, but tests have shown that a .29 is about as low down the scale as you can go for reliable, safe flying. Tests conducted by Mid-west have shown that the Strikemaster will fly with a .19, but takeoffs are somewhat extended, especially off a grass field. A blacktop strip presents no problem, however, although with a .19 penetration in a stiff breeze becomes questionable.

It sports a beautifully cut foam wing, a symmetrical airfoil with a 56 in wing span and packs 570 square inches of area. It's competitively priced at $42.95.

Building the 'Strikemaster' should present no problems except for the rank beginner. The plans provided are very well detailed and feature isometric drawings, building hints, full size parts layouts and construction procedures. I give Midwest an 'A' for their plans.

Construction is simple, although somewhat time consuming. The extra time required is spent planing and shaping the numerous balsa blocks that are included in the kit. The wing is built by first making up the wing skins from the 3-inch wide balsa sheets, and then cementing them to the cores with a good grade of contact cement such as Midwest's Light Dex, Southern R/C's Sorghum, or Wilhold. Be sure to use a good grade of contact cement for the wing skins to insure a permanent bond. For the first time, I tried Westcoast's Red Tak and found it to be one of the best yet. After adding the wingtips, trailing edges, ailerons and the center section fair-ing blocks, the wing should be carefully sanded and any seams filled with putty and sanded again.

The fuselage features a typical box-like construction with plywood doublers running from the front of the sides back to the rear of the wing saddle. Triangular balsa is used on the top and bottom of the sides for added strength and to provide the meat for making the corners rounded.

I must say that my particular kit did not feature an excellent grade of wood, and the die-cutting left something to be desired. The grade of the wood in the Strikemaster was Midwest's biggest headache, since the airplane was kitted during 'The Great Balsa Famine.' Some wood had to be accepted and put into kits that would normally be called inferior, but the situation has been remedied and wood quality is now vastly improved, producing much better die-cutting. The quality of the diecutting is directly related to the quality of the wood used, not the sharpness of the dies as some people would believe.

The balsa blocks included in the kit were preshaped, but unfor-tunately were of very hard, stringy balsa which is difficult to sand or plane without shredding. The only other area of disappointment was with the plywood doublers which did not match the fuselage sides exactly. A call placed to Midwest assured me that the doublers and die-cutting problems had been remedied. Nothing could be done about the quality of the balsa blocks however, because there is no way of telling the hardness of the wood before placing it in the kit. If you should purchase a Strikemaster and find some unsatisfactory wood, a note dropped to Midwest will get you replacement parts free of charge, no questions asked. I think that's pretty decent of Mr Garcher.

The tail surfaces are sheet balsa and are precut to shape. After adding them to the fuselage, all that's left to do is the general equipment installation along with push-rods, etc, and decide how you wish to finish the airplane..." 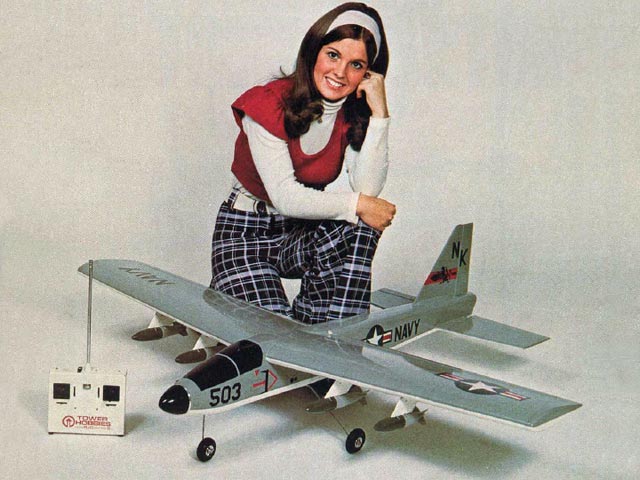 First RC plane I built back in 1977...newbie back then...just learning...building and flying...loved the strikemaster...just fun to fly...fun to build...put a lot of air miles on it...never crashed it...gave it to a relative...thinking about building another one now from scratch...thank you so much for the plans
Jim McClelland - 02/04/2019
Add a comment