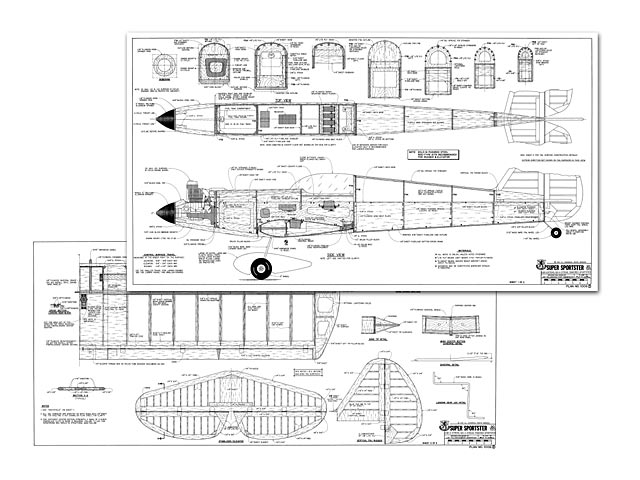 Back in 1973, a fellow named Joe Bridi designed a slick little 19 size sport plane called the RCM Sportster. Originally published as a construction article in November 1973 in RCM magazine, the RCM Sportster (oz6143) has a flat bottom airfoil and, although it's stable and fun to fly, its aerobatics are not what you'd call precise.

Then in 1981 along came Don Anderson and Great Planes Model Manufacturing Co. who purchased the rights to Bridi's kits (including the RCM Sportster). Don redesigned the Sportster as a 40 size airplane with a symmetrical airfoil, a full cowl and lots of little improvements here and there. Thus the Super Sportster (oz2633) was born, to be followed quickly by the Super Sportster 60 (oz10146), Sportster Bipe (oz6672) and Super Sportster 20 (oz7638). I don't have to tell you that the Great Plane's Sportsters are all outstanding fliers. They're so popular that I'm sure most modelers have seen at least one, and a lot of you have owned one.

Now, I happen to be a 4-stroke fan and to me the 120's are the neatest thing since proportional radios. It annoyed me that the only kits I could find for the 120's were either big and slow or else originally designed for 2-stroke 60's. Dropping a 120 into a 60 size airplane is usually not very successful because there isn't enough wing area to carry the weight (including lots of tail weight) and propellers just aren't available that will put that much power to use in such a small airplane. Big and slow avoids these problems, but I like to hot-dog it once in a while. I also happen to like Super Sportsters, so there was never any doubt that I would build a 120 size Super Sportster. I did, and I love it. It performs like a Super Sportster 60 but it's easier to fly, and its size and sound impress everyone...

The Super Sportster 90/120 (that's 90 2-stroke/120 4-stroke) is big (6 feet), light (9 to 10 pounds) and sturdy (plywood and spruce used in high stress areas). It was designed specifically to duplicate the performance of the Super Sportster 60, but because of its size, it's smoother and easier to fly. If you have soloed anything beyond a basic trainer you can fly this airplane. With a regular 120 swinging a 14 x 8, the Super Sportster 90/120 will do the entire FAI pattern and it flies like it's on rails. With an O.S. 120 Surpass turning a 14 x 10, the SS 90/120 is faster than most 60's. and has almost unlimited vertical performance, yet it lands slower than the 60. And when it goes by in a low pass it gives you such a visceral feeling of power that it's almost addictive.

All right, let's assume you'd like to build one. You have some decisions to make up front. Before you do anything else, decide on an engine. The Super Sportster 90/120 will fly on a .75 to 1.08 2-stroke or a .90 to 1.60 4-stroke. That's a large range of power and the choice affects the way you should build the airplane..."

As a Super Sportster and 4-cycle enthusiast (having built and flown a pair of Sportster 60's) it seemed the natural thing for me to do when asked to build and test fly the new Sportster 90/120 from Great Planes.

My first impression upon opening the box was the good quality of the die-cut plywood and balsa. All similar items are either bagged or neatly banded together in a first rate job of kit packaging. It's just like a big jigsaw puzzle; the pieces are all marked and tabbed and the fit is excellent. The 40-page instruction book is very thorough with step-by-step construction pictures all the way, so if you have at least average building experience, this kit should be a snap.

As with most kits of this quality, all the necessary hardware is supplied including the plastic wheel pants and heavy duty landing gear of 3/16 inch diameter music wire. After checking the parts list of over 300 items and the two large rolled plans of excellent quality and detail, I was ready to start building.

Get out the glue: This is a fairly large aircraft with a wing span of 72 inches so you'll have to plan accordingly for ample building space. The first stage of construction is the tail feathers. I was surprised to learn that the tail feathers in the 90/120 kit are built-up and sheeted rather than all balsa like the Sportster 60. Also, it's worth mentioning here that all the control horn surfaces in the tail section are reinforced with plywood.

The next step in the building plan is the wing. At this point you have to decide whether you want to make your big bird a tail dragger or a trike. I opted for the tail dragger. The wing which is pretty much straightforward in building technique, has lightening holes in the ribs, and the tips are built-up with pre-formed plywood and trimmed with balsa. The dihedral braces are plywood and the spars are basswood. One criticism: I found that the pre-cut sheer webs were too short; also some of the ribs were of lighter weight balsa, so I placed these ribs on the ends of the wings.

The dihedral is set by plywood jigs which come with the kit. I elected to use a separate servo for each aileron, eliminating the torque rod set-up which was provided in the kit, as I've always preferred to use two servos in wing spans of over 60 inches. Fiberglassing of the center section is required and a convenient way of doing this, (as per the instruction book), is with a light application of 3M-77 spray adhesive and thin CyA glue. On all hinge surfaces, including the elevator and rudder, the hinges I used were the ones provided in the kit which are large one-piece molded hinges that provide a good dampening effect to prevent control surface flutter.

In planning for the fuselage, which has slotted inner plywood supports and a 3/8 inch slotted firewall for the maple engine rails, I had to modify it slightly considering I wanted to install the O.S. 120 Surpass engine inverted. In order to still maintain the use of the maple engine rails and keep the thrust line the same, I renotched the firewall and the plywood fuse sides to the width of the maple rails plus 1/8 inch. The next step was putting the pre-notched formers in the fuselage and then completing the back section.

In a required modification sent to me by Great Planes (there was a problem with the stab-fuse joint) they advised fiberglassing the inside rear of the fuselage and installation of plywood blocks and screws that penetrate into the plywood of the stabilizer to strengthen the joint. This was easy for me as I was in the process of building the fuselage when this modification arrived. Note: this modification can also be made to the fuselage even after it has been built. The plans and the required modifications recommend using the steel pushrods that are provided in the kit and also the large one piece molded nylon hinges in order to prevent control surface

In the smaller Sportster series kits, the tail feathers are balsa sheet but in the Sportster 120 they are built up (above left) and all the attachment points for flutter, as there had been two reports of in-flight stabilizer/fuselage separation.

The upper fuselage structure is built of formers and stringers which are of excellent quality. Since I was inverting the engine I had to reverse some of the nose blocks and re-fit the chin blocks. Assembling the wing, stabilizer and fin to the fuselage was standard prodcedure. A nice addition to the kit is a preshaped plywood jig that you assemble to make the fin/stab fairing blocks which you can carve and sand to shape before installing. Fitting the wing to the fuselage of the 90/120 involves using two 3/8 inch dowels in the leading edge and two nylon 1/4-20 nylon bolts in the trailing edge as opposed to the four bolts used in the Sportster 60 models..." 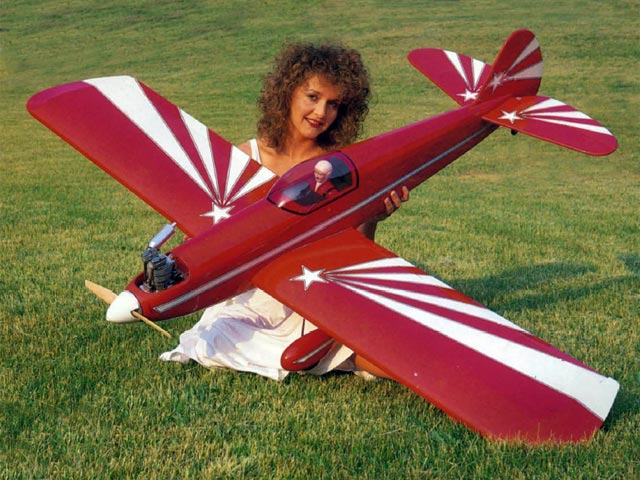 Hi Steve, I'm Luciano from Argentina. I've just finished an electric adaptation of this great flier and I'm sending you the photos [see more pics 004,005]. Don't have to add that it performs as good as the original! Congratulations for your wonderful webpage. Best wishes,
Luciano - 23/02/2015
I am also from arg I want to build the same, how many tables did you use?
jorge - 23/06/2019
Hi, I'm from Bogotá Colombia and I'm building the Super Sportster 120 with some changes in the cowling to adapt a DLE 20ccRA and change the train for a duralumin under the fuselage. Saludos,
Carlos Bolaños - 07/09/2021
Hello Steve and Mary. I send pictures [009, 010] of my latest project to finish, the Super Sportster 90/120, with some modifications, such as foam core wings, and changes in the nose to adapt a DLE 20cc RA engine, as well as installing a duraluminum landing gear in the fuselage. I hope you like it and soon pictures already finished. Greetings from Bogotá, Colombia,
Carlos Bolanos - 23/12/2021
Hi Steve and Mary. I send a picture [pic 011] of my Super Sportster 120 in the process of building for a DLE 20cc RA engine. Finished pictures soon. Greetings from Bogota Colombia.
Carlos Bolanos - 12/05/2022
Add a comment