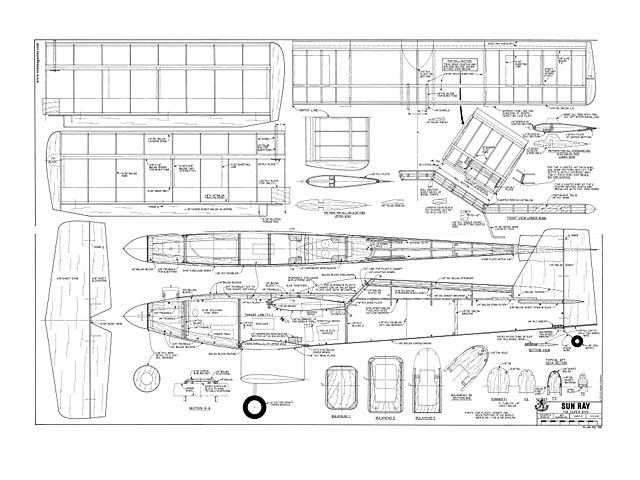 Quote: "Build this high performance biplane for a rewarding new experience in sport and pattern flying. By Jack Scarbrough.

Designed as a new type of biplane for R/C models, this .60 powered plane has the sleek high speed appearance of the latest of the small full-size racing 'sport biplanes'. But in contrast to the pure racing type, the Sun Ray incorporates superior stalling, stability and control characteristics, comparable to the best design practice in R/C pattern planes. At the same time, the low drag inherent in the wing to fuselage and cockpit configuration is retained.

This is a fast biplane, highly maneuverable and performs all AMA and FAI patterns, is good for open pylon, and makes a great all around sport plane for the Sunday flyer. She's extremely steady and stable in high winds, with easy stall characteristics and slow landing speed. The wide stance landing gear sets up good control in ground maneuvers, landings, and take-offs. One of the most remarkable features of this airplane is its ability to do sustained knife edge flight, and starting from straight level flight, will climb out and complete a 270° knife edge loop! The plane is completely predictable in all flight maneuvers.

No hatches exist, access to the fuel tank and battery pack compartment being through the upper wing space and forward through a generously cut-out bulkhead. 1/16 in plywood doublers inside the balsa fuselage sides run 24 in back from the firewall past the wings. These doublers are necessary, especially with 2 wing saddle cut-outs.

Landing gear wire has a minimum of exposed length, utilizing part of the inverted gull section of the lower wing, both for strength and air drag reduction. The lower wing is built on a full depth 1/4 in thick plywood continuous spar, to assure maximum strength through the angled joints and center section.

Most basic building features are normal, with easy construction throughout..." 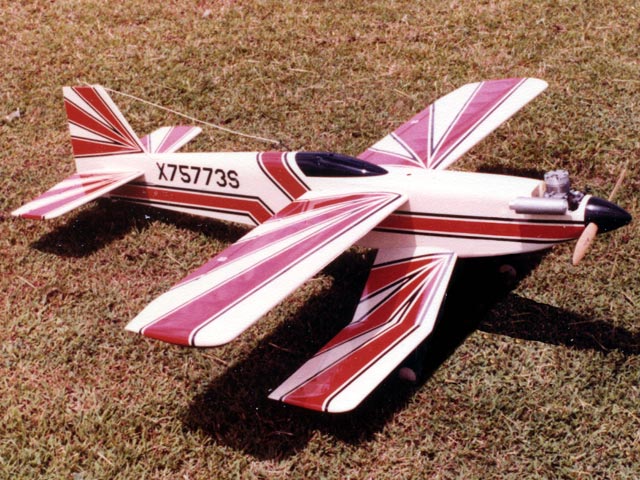 Please, add to this model: Sun Ray - by Jack Scarbrough from RCMplans - 1975 - 51in span - IC R/C Biplane. My model is a 112% scale from the original (wing span: 57 in, engine: OS AX65) [pics 007, 008]. Thank you!
LucD - 29/01/2019
I have the attached photo [main pic] sorry just the one, of the Sun Ray I built about 1980 when I was stationed in the Philippines. The color and trim scheme, cream base and black & red trim, is somewhat iconic for me. My Sun Ray was powered by a Fox Eagle I 60RC, the loop scavenged version with a straight glow plug, Heath radio & KPS-15 servos. As I recall, total weight was about 6-1/2 pounds, which is quite light for a 60-size biplane. It flew like a dream with a very wide speed range and could slow way down for landing without even a hint of stall or snap roll. When my best friend and fellow RCer, Mike Terry, rotated back to the States, I gave it to him. He replaced the Fox with a more powerful engine, an HB 60 Scheuerle as I recall, and flew the airplane in biplane pattern contests with great success.
Doug Stewart - 18/11/2021
Add a comment