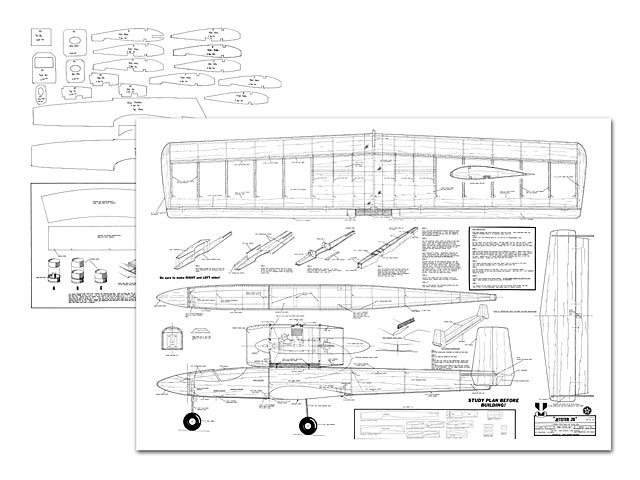 Your first ducted-fan model aircraft should be easy to build - and repair. It must be stable in flight, yet be able to perform aerobatics. One combination of aircraft, fan unit, and engine that meets these criteria is Midwest Products' Jetster .20 airplane, powered by the Axiflo RK-20B ducted-fan unit and the K&B 3.5 cc engine. Although it vaguely resembles German jet fighters of the 1940s, I designed the Jetster .20 as a non-scale model. It is built of balsa and plywood, with Monokote or Solarfilm covering, and can be assembled quickly (typically in less than 50 hours) using familiar model building techniques.

The Jetster .20's wingspan is 48in, large enough for good performance but small enough for easy transport. The ducted-fan unit is mounted externally, so engine starting is much simpler than with an internal fan unit. The K&B 3.5 cc engine is less expensive and burns less fuel than 7.5 cc or .60 engines, delivers more than 20,000 rpm 'out of the box' and idles well. The Axiflo RK-20B ducted-fan unit is made of molded parts and can be assembled quickly. Use any four-channel RC system with lightweight servos.

Building the Jetster 20: The Jetster .20 plan is reproduced approximately one-third size on pages 20 and 21. Carefully read the plan in your kit until you know where each part goes and when it is to be added to the wing, fuselage, or tail. Assembly requires only common modelbuilding tools such as a hobby knife, modeling pins, sandpaper and sanding blocks, needle-nose pliers, screwdrivers, and a sealing gun or iron for the plastic covering. Your building board should be at least 10in wide and 36in long. Use a white glue such as Elmer's Glue-All or an aliphatic resin glue such as..."

Update 18/09/2015: Replaced this plan with a more complete version (inc formers), thanks to AndrewGadsden.

Quote:- "Here is a new set of plans and former tracings for the Jetster." 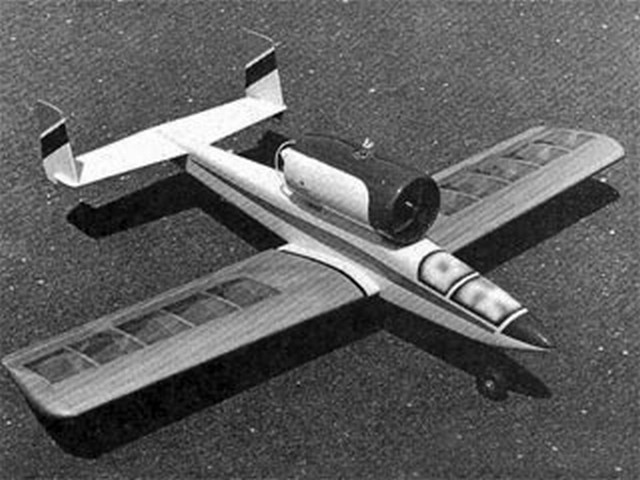 Hi Steve! The dimensions on this plan are off, I compared a 100% printout to an original set of jetster plans and its about 3/4" off both laterally and vertically. I will see about getting mine scanned in here with a tracing of all the die cut parts.
anon - 03/09/2015
Hi Steve! Attached is a couple pictures of a completed Jetster [more pics 005, 006]. Thanks for maintaining such a great resource.
AndrewGadsden - 17/08/2016
Add a comment