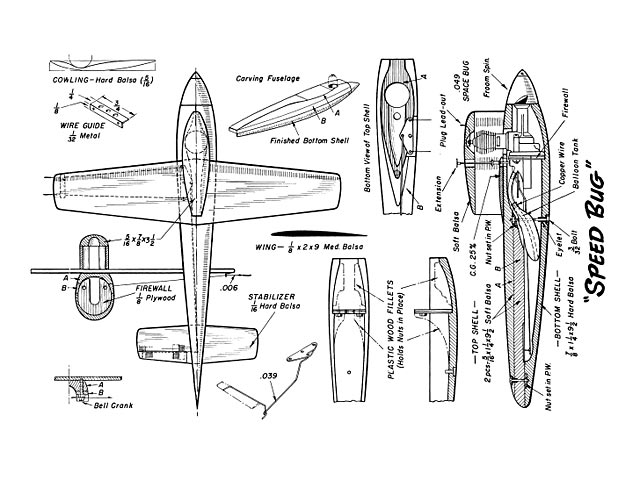 Quote: "You gotta get around that pylon a lot faster now that the A/2 jobs are official. Speed Bug, by Frank Ehling.

By doing a bit of cutting and filing on the Space Bug engine, it is possible to produce a speed model in the Half-A class that will compare in appearance with the larger speed jobs.

There is nothing startling about the Speed Bug with respect to basic speed layout. It represents what can be done in the A/2 speed class when all the latest items are used.

When speed is the objective, the model should be kept light, but still strong enough to hold up under the high-speed conditions. By using those grades of balsa specified, the model's weight will be held to a reasonable figure, providing you do not overload it with the paint job.

The Space Bug was used on the original model. However, other engines are quite suitable. For example, by moving the firewall 1/8 in forward, the Wasp can be used.

If you choose the Space Bug it is necessary to cut off the tank at the point shown on the drawings. Also, cut away the web that joins the fuel line with the air intake tube so that regular fuel tubing can be used to connect the balloon tank to the engine as shown. It is also recommended that the reed valve be removed from the engine before the above cutting and filing is done. After the job is finished, rinse the engine in gas to remove filings. He careful to test-run the engine after the reed is replaced to make sure it works properly.

It is also a very good idea to acquaint yourself with the engine's characteristics before installing it in the model.

Start building the model by carving and shaping the bottom shell. Cut top and side to outlines with rectangular cross sections. SCoop out as illustrated so that the firewall bulkhead will fit snugly..." 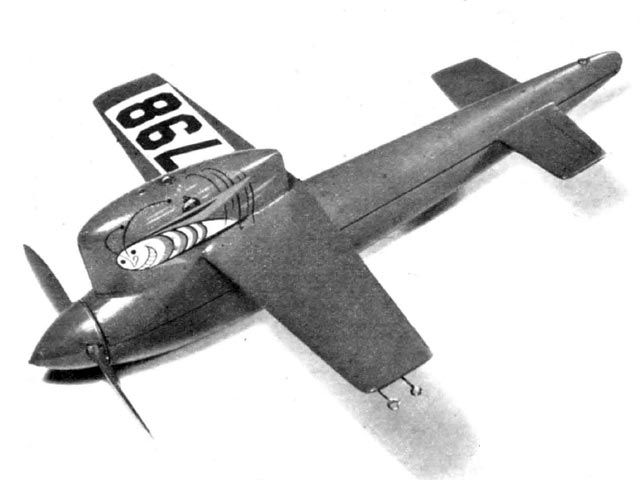