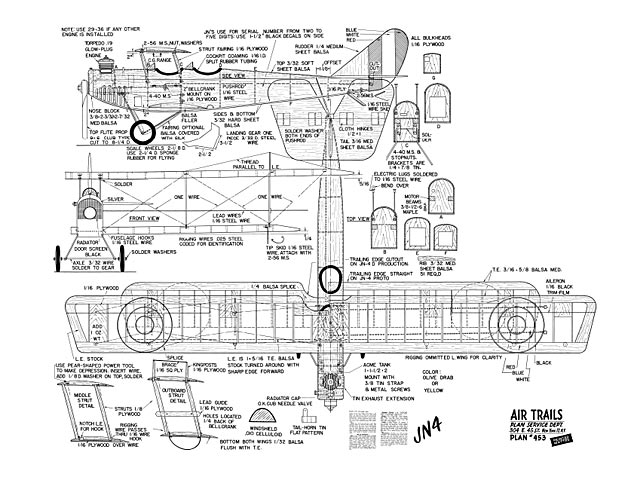 Quote: "Jenny was a real lady. The AT-6 of her time, Glenn Curtiss' bipe is a fitting subject as an old-time U/C'er. Curtiss Jenny, by Dick Ealy.

Queen of the skies may be the way many of us remember the Jennys that performed in the post WWI era. Barnstorming, aerial circuses, silent movie stunts saw Jenny in her glory, as daredevil men and women crawled out through the numerous bracing wires to wave at the crowd from the wingtip. Then the performance was topped off by hanging down from a wingtip skid or axle. Maybe our hero changed from a speeding car to the plane in motion, as an added thrill.

Jenny's story goes back before WWI, with Glenn Curtiss developing the JN-4 for Curtiss Flying Schools. Foreign countries bought them for their pilot instruction program, and when the US entered the war the Curtiss plant along with seven others turned out 3,299 JN-4D's as our standard training ship using an OX-5 V-8 90 hp engine. It would climb to 2,000 feet in 10 minutes, and the maximum speed was 80 mph, with a 45 mph minimum. Advance trainer versions with 150 hp Hisso engines were used for gunnery, bombardment, and observation training. A total of 5,975 Jennys were procured, and after the Armistice warehouses of uncrated new Jennys were auctioned at a fraction of their cost. That is the reason that hundreds of them appeared all over the US.

The model Jenny was built to a scale of 1/12 as a joint venture with the author as designer and Walt Farrel the builder and pilot. Our model has proved its airworthiness, having been flown nearly every Sunday over an eight month period, or approximately 125 flights. With the powerful .19 Torpedo it takes off fairly fast and handles easily, going just where you want it. When the motor cuts, you can hear the whistling of the flying wires as it glides in for a realistic landing. Those wingtip skids come in handy on asphalt, as the wings rock due to narrow wheel tread.

Bracing the long thin wings was the big problem. Since the fuselage, landing gear, and tail are conventional structure, we skip this and guide you through the wing construction. In fastening the landing gear, attach front strut to underside of motor beams with 1/4 x 7/8 tin straps and 4-40 MS and nuts. Let rear strut dangle until lower wing is glued to fuselage. 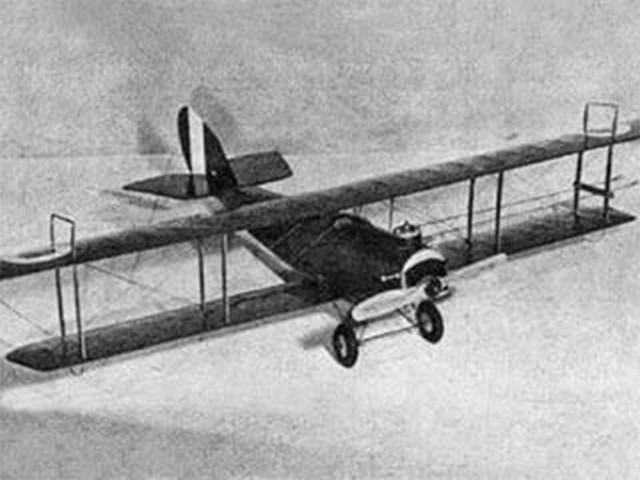 Thank to Pit for clarification, Dick Ealy was the designer of this one.
SteveWMD - 21/09/2014
Add a comment