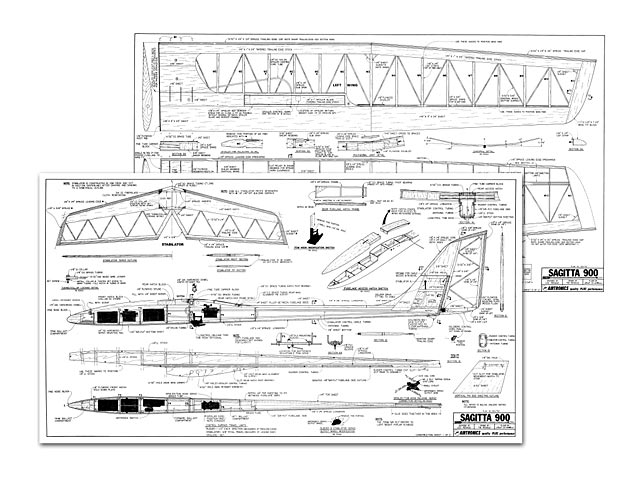 Published in RCM, then kitted by Airtronics.

Quote: "The sport of R/C soaring has not changed significantly in the United States during the past five years. The major kit designs of the mid-1970's such as the Paragon (oz5849), Bird of Time (oz2093), Aquila (oz5136) and Olympic II (oz5116) are still competitive designs in today's contest environment. The most significant advances have been in moving the towhook further aft for higher launches, and adding ballast to extend the speed range and penetration characteristics for variable weather conditions. This approach has been quite successful for the majority of American fliers, and offers the beginning pilot a reasonable chance of success.

The world-wide scene, however, has undergone a significant change in design philosophy during the same period of time, largely due to the demands of FAI F3-B class competition. The European countries, in particular, have developed models which offer significant improvement in L/D ratios, using Eppler developed airfoil sections and advanced materials and fabrication techniques. In most cases, these aircraft are club or group efforts, due to the tremendous amounts of time and skill required to fabricate molds and produce models. These techniques have been quite successful, and have influenced R/C sailplane design around the world.

The requirements of F3-B competition are quite different from the typical AMA Thermal Duration contest. Only the select group of American fliers who are involved with the FAI activity truly recognize the potential performance improvement that is possible with detail design refinement and improved technique and piloting skills. This group demands the maximum available performance, and improved models must be developed to advance the state-of-the-art. Superior designs flown by superior pilots will dominate any class of competition. The improved efficiency and handling characteristics of the new generation of R/C sailplanes will affect the American contest and sport flier dramatically during the 1980's. A new breed of sailplane has taken wing, which fly further, faster and higher than their predecessors.

The Sagitta is one of the new breed, which has already proven itself a World Class design in both AMA and F3-B competition. First flown on July 20, 1979 (the tenth anniversary of the first flight of the original Olympic 99 and Neil Armstrong's lunar landing) Sagitta has been very successful. The version described in this article is the original 'gas-bag' which I flew to 3rd place in the 1979 International LSF Toumament. This same ship was flown by Skip Miller after the contest and turned sub-10 second speeds over the FAI F3-B course. Further developments of the design with straight wings and ailerons, plus fully sheeted wings helped Don Edberg to gain a place on the 1981 USA R/C Soaring Team. Dwight Holley also gained his team spot flying the version described herein, with a thicker stab section to suit Dwight's flying style. Four of the top six places in the Team Selection Finals were gained by Sagittas, including those flown by Skip Miller and myself.

Sagitta, (pronounced Sag-ee-tah) is a Latin word meaning arrow. It meets all requirements for AMA Standard Class competition, yet is totally competitive in the unlimited class. The design is conventional in appearance with careful attention paid to minimizing aerodynamic drag and improving efficiency. Construction utilizes conventional model materials and techniques, with structural design optimized to provide a rugged airframe. This design can be easily duplicated by anyone who has a flat bench and who has already built a simpler ship, such as the Olympic II. Some additional time and effort in carving and sanding are required to develop the smooth flowing contours of the Sagitta, but the aesthetic and aerodynamic benefits are well worth the extra trouble.

Two major considerations influenced the design of the Sagitta: First, to improve the flight performance of the Aquila and Aquila Grande; second, to allow complete access to the radio equipment and ballast without using any tools. In addition, we wanted to improve the spoiler hook up system used on the Aquilas. These requirements led to the forward hatch and hinged access panel which provide excellent fuselage access, and simple spoiler hookup as well as wing retention. As a bonus, the towhook becomes readily accessible, simplifying adjustment of releasable towhooks.

The fuselage design provides minimal frontal area and wetted surface for decreased drag. The shoulder mounted wing position eliminates two intersections, and the obtuse angle between the fuselage sides, and wing lower surface makes wing fillets unneccessary. The slim aft cross-section is possible through the use of stranded cable inside tubing pushrods. The side and plan view outlines represent the minimum envelope consistent with equipment space requirements and structural requirements. Two ballast compartments are provided, which perm it the flier to more than double the the model's weight. Full length poplar ply sides with spruce longerons provide plenty of strength and rigidity.

Of course the heart of any sailplane design is the wing. Sagitta utilizes a relatively low aspect ratio to raise the Reynolds Number and to pack 900 square inches into a 100" span. This approach has been proven in practice by the success of the Aquila and Oly II in Standard Class competition. Wing planform is contant chord center panels with double tapered tips. The center and tip panels are equal in span for better turning charactertistics due to improved structure and moments of inertia. The sharply raked tips provide low drag with distinctive, appearance. Polyhedral is used for quick turn response with rudder/elevator control. The shallow center angle and increased tip angles improve efficiency and give better response.

The airfoil used is a slightly modified Eppler 205 section. This section offers moderate thickness of 10.6%; large leading edge radius with substantial Phillips Entry, and a shallow trailing edge angle. It is also flat bottomed from the spar aft, which makes for easy building and alignment. Flight performance has proven the superior characteristics of Dr. Eppler's computer and I think the 205 is the best section currently available for normal wing loadings and flight tasks.

Wing structure is conventional, with a full D-tube section for bending strength and torsional rigidity. Warren truss bracing is used between the spar and trailing edge for extra insurance against high speed flutter. The wing joiner is 5/16 in diameter music wire to provide extra rigidity at the center joints, while still allowing some flex to 'read' the wing under high launch stress. Oversize spruce spars with shear webs which progressively decrease in thickness contribute to a 'burst proof' structure. The 'cross your heart' polyhedral braces ensure a strong joint without excess weight.

One feature of this design is the use of hardwood trailing edges on the wing and empennage. These are formed simply by adding rectangular section spruce strips to balsa spanwise members. These edges allow the trailing edges to be shaped to sharp edges, instead of the blunt edges possible with balsa structure..."

Note this plan is from Airtronics, nor RCMplans - not sure if that there are important differences between the way the 2 plans were drawn up.

Article text (reprint from RCM April 81), thanks to RB.
Also added sheet 3, drawing of wing ribs thanks to PedroL, note this is actually page 3 of the RCMplans version, not from Airtronics.
Review. 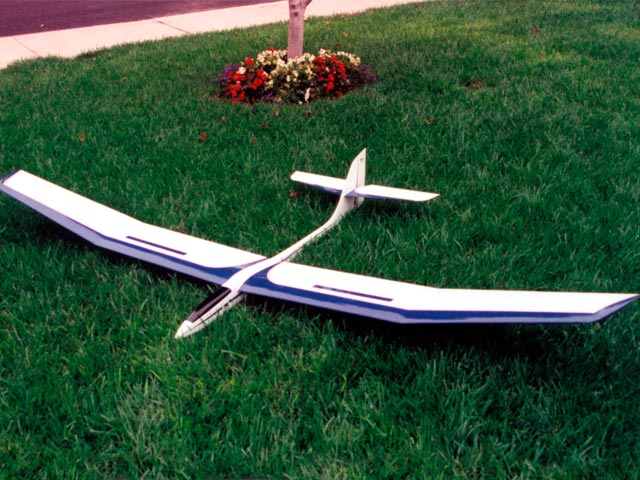 Photo of completed Sagitta model was found online at http://waywally.com/rc/sailplane/older_photos.htm
SteveWMD - 20/09/2014
This was one of my favourite gliders. The kit went together very well and the final result was a very solid glider. It handled extremely well and had good penetration. I ended up building one with ailerons. The Sagitta 900 was a good introduction to a more advanced soaring experience. I highly recommend it.
Ron Ashworth - 23/10/2020
Add a comment