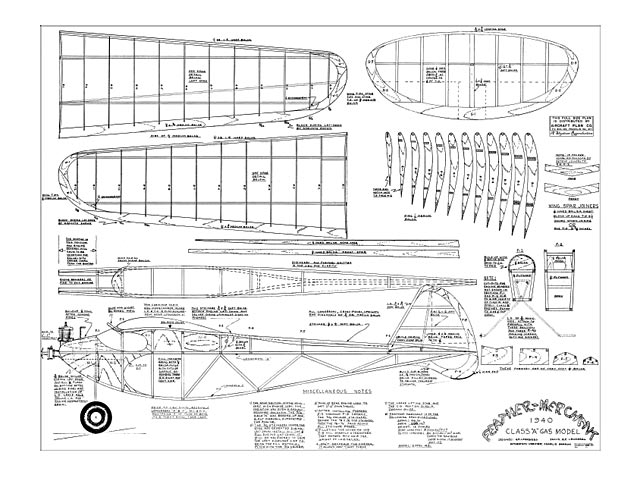 I have never before been this excited about an R/C model. Never before have I lost sleep over the prospect of building any one model - but the Feather Merchant really did a number on me! When I first received the kit from the UPS driver, I was intrigued. My curiousity forced me to pull out the plan and take a look at it. That was all it took - that night the plan was mounted on the bedroom wall where I could gaze upon it with a totally child-like anticipation. studied its every stick and every curve. I fell in love - with an Old Timer model!

It was about a week before I could begin work on the old bird, a week which seemed to drag! During this time, I planned out my stategy. Firstly, I would build that curvaceous fuselage. Secondly I would build the stab. Phase three would be the fin and rudder. Finally, the wings would come together. All of this was worked out in my mind during that agonizing week, but it was part of the fun. It was a little like picking someone else's brain, like trying to figure out whodunnit halfway through a mystery novel, or putting together a puzzle. I was challenged, and my mind was obsessed.

The Feather Merchant kit is a little unusual in my limited experience with kit models. There is no step-by-step instruction manual. Perhaps this is not unusual with 0/T kits, I don't know. When I asked the manufacturer, Lehm-berg Enterprises, about this, I was told that although there was no such manual included in the kit, there soon would be a procedural manual which would lead the builder through construction in a general way. In my opinion, this would be all that is necessary.

As I looked over the plan, I noticed that there were plenty of building notes written all over the place. Their position-ing coincided with, or pertained to the part being built. For example, the wing plan reads: 'Sand trailing edge to match airfoil upper camber. Don't get too ambitious, leave it about 1/32 to 1/16 at the edge. Fair round reed into trailing edge.' Now that pretty well sums up the shaping of the trailing edge. I don't have any problem with notes like these, in fact I had no problems at all in construc-ting the Feather Merchant. However, a beginner who has never built a model before would be well advised to have someone, preferably a modeler with a few models under his belt, available to answer questions.

A supplemental information sheet is included with the kit which covers the areas of spar doubling for R/C versions of the three FMs, servo locations, push-rod locations, CG location, balsa soaking recommendations, incidence, dihedral and washout in the wings, and engine recommendations for the three FMs. That's a lot of information - but the modeler is the one who is left with the question: Where do I begin? This can be a tough question for a rank beginner. I believe the procedural manual will provide an adequate answer for this modeler.

Along with the notes on the plans is a brief and enteraining history of the first Feather Merchant. As there are actually three versions of this model, perhaps an explanation as to which came first would be in order. The FM-72 (the model featured in this article) came first in 1939. It was designed forthe Brown Jr ignition engine. After this model came the FM-46, a 73% version of the original with shortened wings and a slightly altered nose. This model was the direct result of Santa Claus' generosity as he left Fred Lehmberg a Bantam ignition engine under the tree on December 25, 1939. The big daddy in the Feather Merchant family is relative newcomer. The FM-80 was designed in the last weeks of 1981. As it is a scaled up version of the FM-46 which was designed in 1940, it is legal for SAM (Society of Antique Modelers) competition in R/C Assist only (which allows scaling of legal models). On with the review!

CONSTRUCTION COMMENTS: When I was originally approached to write this review, I was asked if I would like to build an electric powered version of the original Feather Merchant. As I am primarily an R/C soaring type - although one who has recently softened his heart towards models with built-in lift - I agreed that this was the way to go. As they say, electric power is good, clean, QUIET fun!

The manufacturer suggested that I use the Leisure Gear Motor. The publisher suggested I use an average weight radio system so that we could get some idea what the performance would be like for the average flier (not competition minded). So the choices were made: a Leisure Gear Motor (05 Class with a 2.5 to one gear ratio) would be the power plant, and a new Circus Hobbies Century VII FM System would handle the radio control.

The first thing I did to begin construction was soak the 3/16 diameter reeds and 3/16 square balsa sticks needed to form the fuselage sides, wing tips, and the vertical and horizontal stabilizer outlines in the bath tub overnight. This proved more than adequate for the reed parts as they became very flexible in a matter of four hours. The 3/16 sticks needed about a 24-hour soak to get them sufficiently pliable to conform to the fuselage profile. A superior method of soaking the balsa is to take a pump spray bottle of Windex glass cleaner and give the balsa a good once-over spray. The amonia in the solution softens the cellulose of the balsa wood almost immediately. I can't say that I've actually used this method, but it is fequently used by other modelers so I know it works. Give it a try on both the balsa and the reed.

The reed parts were bent around cardboard froms copied from the plans using carbon paper (see photo), and allowed to dry overnight. When they were removed (see photo), they were almost perfectly shaped and ready to go. I did this to unload the delicate ribs in the stab and rudder, and to make sure I achieved the exact outline of these parts as well as the wing tips. It worked beautifully, and I recommend that you do it this way also..." 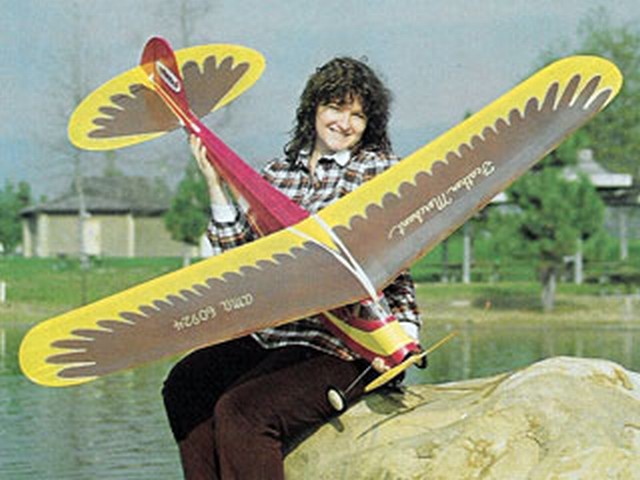