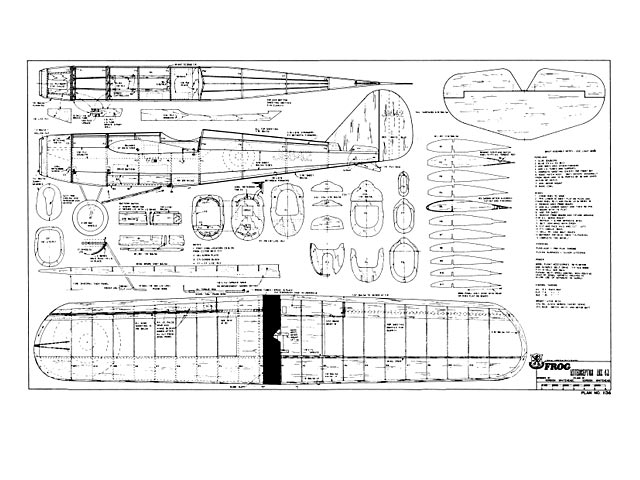 Quote: "The Frog Interceptor was a small rubber-powered toy aeroplane marketed in 1932. It had a pressed aluminum fuselage and painted paper wings, and though it was supposed to represent a semi-scale fighter, it was years ahead of its time. For power, it had a rubber motor, with step-up gearbox for the small prop. RCM is happy to present gordon Whitehead's updated version for electric power

Well, there I was in our public library, leafing through this book 'Frog Model Aircraft 1932-1976' by Lines and Hellstrom to see if any of the Frog flying and solid scale kits your scribe had made years ago were featured. Then, all of a sudden there appeared a whole raft of information on one of the Frog models I had always wanted, but was bom too late to get: the Interceptor Mk IV.

With the book giving a full description of how and why it was created, a 3-view of all things, and copious color photos, how could I resist? An idea began to germinate, and with no more ado I checked out the book and took it home.

As many of you will know, the original Mk IV spanned about a foot, and was rubber powered via a step-up gearbox. Imagine (some of you will remember!) the gentle whirr the little beauties must have made when soaring away from a hand launch. If I was to make a scale model with scale sound, there was only one way to power it, and a line to the British firm Model Flight Accessories, located at The Mill, Mill Lane, Worth, Deal Kent, England (2 IRCs for reply to letters) describing the idea instantly produced an RX 15 motor and Olympus gearbox, for which a big thank you is in order.

The dining table became a hive of activity. The pencil danced and flew, and the plan gradually materialized. The replica is four times the original size (hence Mk4X) spanning 46-1/2 in, and there are some concessions to 'scale' and some discrepancies. The 3-view deviated from the photos in classic style, so I went with the pix. The wing section is based on the Eppler 205. Instead of the flat-bottomed 1932 o/d job. The landing gear plugs in as per original, but the metal strap retainers are replaced by rubber bands.

With modern covering technology in the form of Pro-Film Chrome and Solarfilm's Litespan, getting the colors right was no problem. In fact, if you like this model, get the Frog book from your library, and check out the available 'scale' schemes. Besides the RAF schemes, for which six different squadron transfer sets were available, the original models were produced in the brightest contemporary military schemes of Argentina, Belgium, Holland, France, Italy, and the USA. There was even a ski-equipped one. and one done in sand/spinach camouflage. After WWII, Frog marketed the Mk V, which featured a 'modern' tear-drop canopy and wing-mounted fixed l.g. with Hawker Tempest style wheel covers.

But enough of that. Let's pick the lightest balsa, cut out all the parts, and build. Most of the essential construction details arc noted on the plan..." 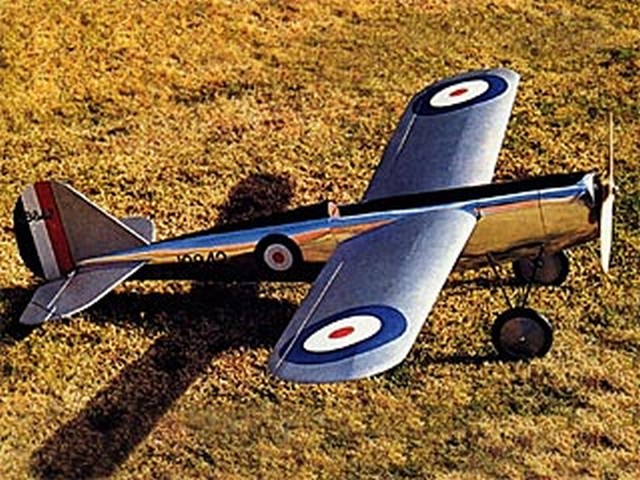 I remember getting the Mk V for my birthday – but never was allowed out to fly it because it ‘was too expensive and I might break it’. LOL. If memory serves, this was the ‘Frog Fighter Mk V’ and it had a geared winder built into the box with cutouts at the side for the wings. You assembled it, dropped it in the box, the dogs engaged the propeller and you just cranked the handle.
Daithi - 20/09/2014
The Frog MkV was an amazing piece of very early RTF. I had 2 or 3 - seemingly expensive at 12/6 (£0.72) but not bad value as they lasted for years and Frog spares were wonderful - you could get a replacement gearbox or pack of rubber motors by return of post. Super fliers and usually only discarded when careless handling or Mum's unsympathetic handling resulted in creasing of the paper wings!
KenJones - 22/09/2014
I'm sure this one was also published in the British "Radio Modeller" magazine at the time - I wonder if anyone has that article?
RMC - 30/07/2020
an Intercetor was published on 1997 nov-Aviation Modeller International, similar but with parasol wing.
pit - 30/07/2020
Add a comment