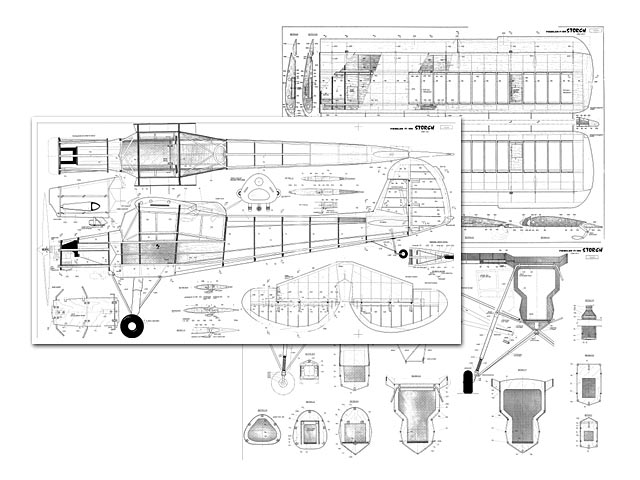 GERHARDT FIESLER, THE GREAT AEROBATIC ACE, founded his own aeroplane manufacturing company shortly before the outbreak of World War II. This company was to produce one of the strangest looking aircraft of the last war. As the German counterpart of the British Westland 'Lysander' the Fiesler Storch was also developed from a pre-war project, and had flown originally in 1936.

The remarkable STOL characteristics of the 'Storch' enabled it to land on, and take off in, very short distances thanks to the Handley Page type leading edge slats, and its Fowler Flaps. A valuable asset in the days of the Second World War when the helicopter had not yet been put to practical use, its performance rendered the 'Storch' invaluable in its many-sided roles of communcation, observation, reconnaissance, command, ambulance rescues, staff transport, bombing and finally spy support. It could be said that the Storch probably was the first multi-role aircraft ever to be produced.

Svenson's one sixth scale kit of the Fi-156 is without doubt a masterpiece. The kit itself weighs over 8 lb and on opening, one beholds a multitude of tubing assortments, pre-cut timber and specialised hardware. The rolled plans are well drawn and detailed, and are used in conjunction with the very comprehensive building instruction manual. The manual is divided into sections with the appropriate parts list heading each section. The step by step sequence is by numbers, and a photograph here and there helps as a visual guide. It is wise to read the complete section, and familiarise oneself with the parts before commencing with the glue.

A high degree of development and tooling has gone into the production of this kit when you consider there are 62 die-stamped aluminium parts of ten different types, and seven spindle machined strips approximately one metre long in 'flitewood' (similar to balsa). The undercarriage consists of 42 items, 12 of which are die-cast, and 70 nuts, bolts and washers to put it together. The windscreen and rear cabin are beautifully moulded in clear PVC. The front cowling and bottom fuselage fairing are vacuum formed in ABS as are the engine exhausts, oil radiator and landing light. There are no less than 38 ply and balsa die-cut sheets, and the acessory pack includes everything to complete the model, right down to the last nut and bolt with of course, the exception of adhesives, covering material and paints.

One could not consider the 'Storch' a simple project, but to the modeller who has a few scale kits under his belt, it should present no real problems, in fact, this kit is made specifically for the keen scale modeller who just hasn't time to start from scratch, but wishes to produce a first class scale model. The 'Storch' isn't small, at one sixth scale, it spans 93-1/2 in. According to Svenson, the total weight of the finished model, less radio should be about 6-1/2 lb. I think this is being optimistic to say the least.

Construction: I purchased the Hasegawa plastic kit of the Fi-156, which is superbly detailed, and used it as a reference throughout the building. The wing, having a flat bottom section, is built over the plan on the building board. Spruce spars are used with ply ribs at the root, retaining a Vain ply tongue box, for a 1/4 in ply tongue. Leading edge, slots and tip blocks are spindle cut in 'Flitewood.' The root, lead-ning and trailing edges are balsa covered with cap strips on the remaining ribs, in keeping with the full size aircraft. Flaps and ailerons are spindle cut to section in balsa, and only require bottom sheeting which makes them hollow and light. The flaps are fully functional being hinged with special brackets to function like Fowler flaps. The ailerons are also hinged on special brackets with counter balances. I made mine functional to reduce the load on the servos. Due to the large surfaces, and in particular the requirement to keep the cabin area un-cluttered, a separate servo for each flap and aileron is mounted in each wing. Bellcranks are supplied in the kit for single servo operation if required.

The Handley Page type slots are per-manently fixed to the leading edge in the open position. These are fabricated from two pieces of 'Flitewood' already spindle cut into shape. Care should be taken to join these correctly, and to make sure the inside curve corresponds to the leading edge radius. I taped a length of garnet paper to the leading edge of the completed wing, and used it as a sanding template.

The landing gear, without doubt, is the focal point of the 'Storch,' and has been faithfully reproduced. The spring loaded telescopic struts work as per full size aircraft, except of course, they are not hydraulic.

Don't forget to make the door that opens on the starboard side functional, or you won't be able to get at the servos and radio once you have glazed the cabin.

A 60 motor is the recommended power plant, so I decided to use my OS60 FSR. There is ample room within the cowling to fully hide the motor, including a custom made silencer, which exhausts out of the bottom of the cowl as per full size. Incidentally, access to the engine installation is achieved by simply removing the formed aluminium cowl covers. The stabiliser, elevators, fin and rudder are built up over the plan, and the non-moving parts sheeted with 1.5mm balsa, including the aerodynamically mass balanced parts as per full size.

RC installation: The Rx is mounted with the failsafe black box in front of the instrument panel, and the flight battery fitted in the engine compartment on top of the fuel tank in a flat four configuration. Two servo's were fitted in each wing for flaps and ailerons. The rudder elevator and engine servo's in the cockpit floor, under the pilot's seat.

The CG came out slightly tail heavy, so I added to the front cowling former, 4-1/2oz of lead - just enough to give a slight nose-heavy condition.

Flying: On arriving at the airfield, the wind of about 15mph was unfortunately angled across the runway which is fairly wide, but fenced downwind with a 3ft barbed wire fence. Anyway, after a photo session and a thorough check over the model and radio etc., I managed to get the motor started after a slight delay caused by the plug oiling up with old castor oil from engine tests the previous weekend. With the engine now running perfectly, and editor Bill Burkinshaw on the sticks, we decided to let it go at full throttle due to the shortened takeoff run across the runway, but we need not have been so cautious, as the Storch leapt into the air in less than 15 ft with little or no deliberate effort on the part of the pilot. The climb out was quite steep, but straight. No corrections for out of trim were necessary, except the rate of climb which was reduced by a decrease in throttle. After a couple of circuits it was obvious that the aileron and elevator were slightly sensitive, requiring a reduction in movements for the next flight. Bill soon got used to this, and flying around at half throttle became very enjoyable he says, and thrilling to say the least for me - taking photographs of my latest creation. Co-ordinated rudder and aileron turns were much smoother as you would expect, and I intend to couple the rudder and ailerons together electrically.

The wind was now gusting up to about 20mph and veering directly across the run-way, so we decided to terminate the flight. Bill brought it in for a good landing, keeping power on to maintain the crosswind heading. The touchdown was a joy to behold, as the suspension absorbs any tendancy for the model to bounce, it just sinks gently down onto the wheels and stays there, unfor-tunately the crosswind did get under the left wing before it came to a stop, and spun it round on one wingtip, but there was no damage. Due to the wind conditions, it was decided not to have another flight. I didn't want to chance any damage at this time, as I especially wanted to fly the Storch at Old Warden All Scale Day, which was the next weekend.

Flying at Old Warden was really something. It behaved beautifully.Take-offs with those Handley-Page leading edge slots, and about 15° flap gave so much lift that rotation can be achieved in less than 10 ft. The climb-out looks strange, since the model appears to be riding an escalator. The shock absorbing landing gear makes for good ground handling, and every landing is sheer poetry in motion as the model touches down then the struts begin to depress as the weight transfers from the wing to the wheels.

Summary: I can say without a doubt that Svenson's Fi-156 Storch is the most enjoyable scale model I have ever built and flown. The kit price £132 may seem expensive but once you've examined one you will immediately realise that it is good value for money. All credit must go to Svenson for this high quality kit and for even attempting to produce model replica of such an unusual aircraft." 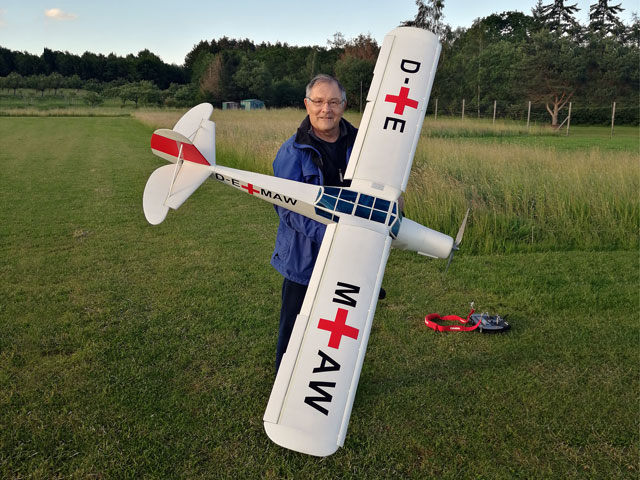 Photo of completed Storch model [more pics 003] was found online at http://homepage.ntlworld.com/alanet.marshall1/RC-page/rcpage.htm
SteveWMD - 20/09/2014
After Paolo Severin, I would rate Svenson as one of the top modellers today, assuming that he's still alive too. I'm not the only one to say that because the RCM&E article attached to the plan calls it a masterpiece.
GreggD - 29/12/2018
I am sending you new pictures of my Fieseler Storch FI 156 [model photo & more pics 004]. The model is powered by an electric motor. The picture was taken on our model airfield in Gladenbach-Mornshausen, Germany http://www.mfg-salzboedetal.de/
Bernhard_Dittmann - 18/06/2019
Fieseler Fi 156 Storch from Svenson [pics 005-011]. Also from Svensson plans, built by me Jorge Linares Gonzalez, Medellin Colombia, South America. Also see video of fullsize at https://youtu.be/-dGDQbWDkNo
Jorge Gonzalez - 05/12/2021
Add a comment