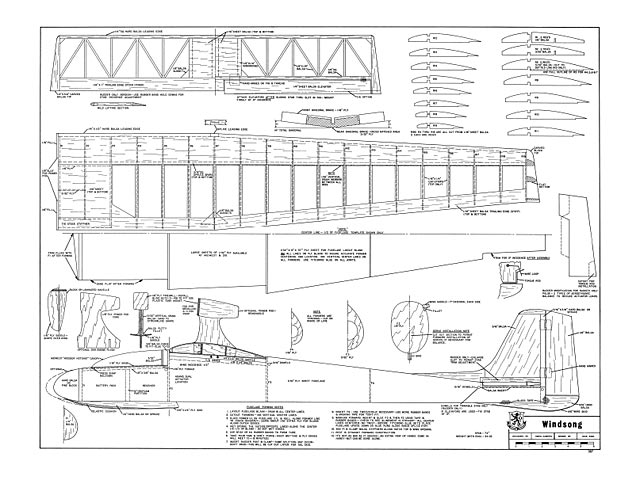 Quote: "How does one explain the mood, the time, the place, the peace? To me, this is what it's all about, but only another sailplane addict can ever understand or even believe in its importance. The Windsong does not stunt, roll, do vertical eights or hot touch and goes. It is not at home in a powered pylon race, it just flies. It flies up rather quickly and comes down quite slowly and it does this with great grace. That's all. It is beautiful to the eye, in the air or on the ground.

It has a detachable motor pod so that it can be soared in thermals or along slopes but in these flat lands I fly the 'impure' powered version. The Wind-song is the end result of several years of design experiments with a wide variety of sizes and shapes and constructions of powered gliders. It's quite traditional in many respects but unique in a construction technique which contributes to the simple clean lines of the fuselage form. It came about by accident.

I have long envied the clean and smooth oval cross-sections possible with fiberglass fuselages, but considerations of time combined with an inherent laziness has prevented me from going that aromatic route. Lots of formers and gangs of little stringers belong to my lost youth and so for years modified rectangles have become the rationalized expedient.

It was while working on the original Skampy (oz1919) that thoughts of the strength of curved bent forms occurred which resolved themselves one quiet evening when, with nothing better to do, I began to bend balsa. Two disadvantages soon became clear - the tendency to split along the grain plus the necessity of gluing up wide sheets. Looking around for something else to bend I found a rather large sheet of Midwest's 1/32in birch plywood left over from an abandoned project and an idea was born. Not very clear but a glimmer. A one piece formed fuselage! Abandoning the traditional engineering approach of 'draw it up and build it,' I reverted to my artist's instinct to let the material lead the way. I became a follower. Rough cutting and wet bending resulted in an inverted teardrop section and formers were then cut to tit existing openings. The whole procedure was backwards but it worked. Within a few days the process was refined and a larger version soon became the beginnings of Windsong.

Since then, several more fuselages have been built with minor modifications which have been included in the plans. While an extra pair of hands are helpful, construction can be handled atone with the one-piece shell-forming and gluing being accomplished in as little as 1-1/2 hours. The end result is smooth and round, exceptionally strong and almost as light as sheeted balsa. The birch plywood does NOT require additional covering and takes half the usual amount of dope to achieve a fine finish. Reasons enough to give it a try.

The resulting reduction in drag coupled with a rather thin airfoil section creates a sailplane with excellent penetration capabilities plus a wide range of slow to fast flying speeds." 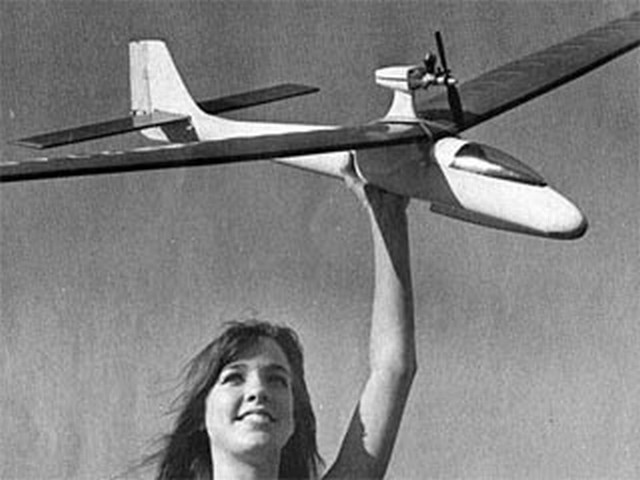