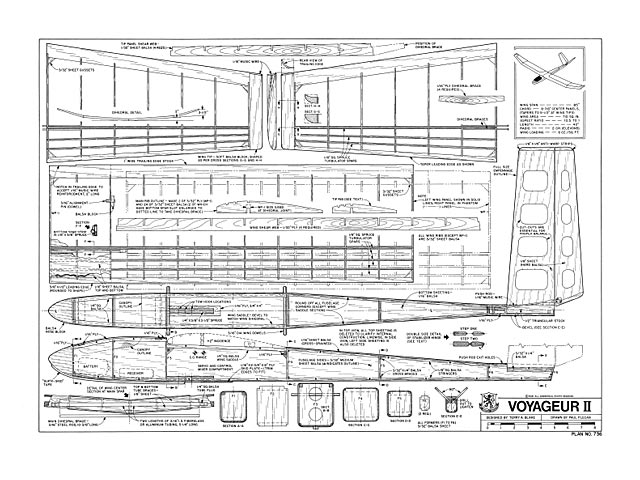 Quote: "If you are looking for a first scratch-built thermal sailplane, the Voyageur II is for you. This V-tail conception will please both the beginner and experienced pilot. Designed & Built By Terry A. Blake.

One August day I sat down to build a new wing for my primary sailplane which over the past I hree years had taken a fair number of tree and post landings. I had somehow convinced myself that the rest of the plane was airworthy even though its battle damage was only slightly less lhan that of the wing. Since this new wing was to be a rather simple project, I decided to make a few modifications to the existing design in hopes of improving the plane's overall performance. Nothing major, since the design of original R/C aircraft was still an area I knew only enough to talk about staying away from.

Then RCM ran an article on sailplane design principles: just whal I needed to bring model designing out of the closet. I guess Mother Nature (in cahoots with RCM) was at work here, preparing me for this new dimension in radio control. As the idea of flying an aircraft that was entirely my own creation began to grow, those metally suppressed dings and dents in my Old sailplane began to stand out like gravy Stains on a white formal coat. After all I told myself, the plane really didn't fly that well anyway. I collected the plane's salvageable pans, put the rest in the bone yard, and sat down at the drawing board with a large sheet of drafting paper and the RCM article.

Fourteen months, and four prototypes, later I had a successful flying ship. I must confess that I adopted several proven concepts into this, my first original design. Specifically I inrcorporated into one airframe many of the construction and performance features I have enjoyed from those sailplanes I have built and flown. I christened her the Voyageur ll as the final design differed considerably from the original prototype. Actually, 11 major and minor modifications were necessary before the plane, presented here, achieved the stability and thermaling performance I sought.

I chose a V-tail design for four main reasons: They're practical for landings in tall grass, reduce drag, build easy, and usually attract an eye or two at the flying field (from some of the looks I get, I suspect that some folks doubt their flyability). Don't let this or the idea of control mixing scare you away from an elevon design. The plane flies beautifully, and the Voyageur's large radio compartment is adaptable..." 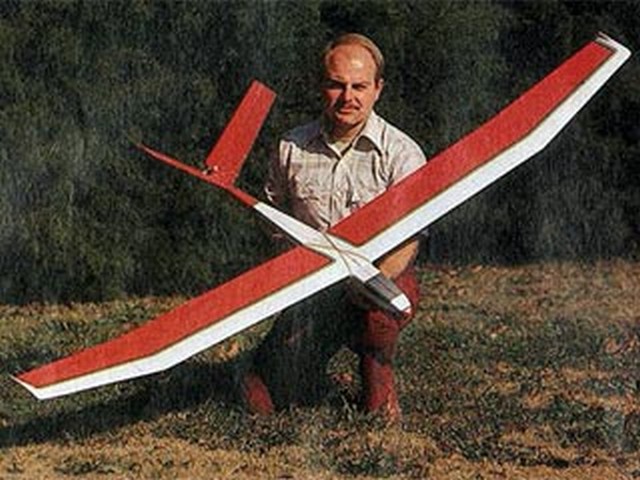